This story is about the reuniting of a WWI medal with two others awarded to a British soldier. Bill did all the research and:
'This story is for those of you who have seen the film Beneath Hill 60.
In this case it is the story of the search to return the 1914-15 Star of 79276, Sgt J McQuade, 178th Tunnelling Company, Royal Engineers. Our story starts long before it finished. It commenced in November 1915, with the award of the Distinguished Conduct Medal (DCM) to Sgt McQuade. The citation published in the London Gazette of 22 January 1916 reads:
'For conspicuous gallantry and devotion to duty in Tambour Du Clos during November 1915.
When the enemy had exploded a mine on the 5th November, it was due to
his personal courage and example that our buried miners were extricated,
the air being very foul and the gallery rendered most unsafe by the explosion.
On 28th November, when the enemy were believed to be within 10 feet of our galleries, he laid, tamped and exploded a charge which forestalled them.
On many other occasions he has rendered gallant service.'
The story then jumps, as many of our searches do, to modern times, 2008 to be exact, when Peter Harrison, a retired Australian Army officer and his wife Eileen were wandering through the village of Callander in Scotland. They saw in the window of “Lady Kentmore’s Antiques, Curios & Collectables”, Sgt McQuade's 1914-1915 Star.
As Peter, who in the past has helped me with research, said when he passed me the medal. "It looked lonely and I couldn't leave it".
So now I found myself the 'owner' of a medal and like any other owner wondering about Sgt McQuade and what made the medal so 'special' .
Perhaps it was because it was originally issued to 16938 Private J McQuade, Royal Dublin Fusiliers, the regiment that he joined on enlistment before transferring to the Royal Engineers. And that my mother's husband, Arthur Wyndham, while recovering after his evacuation from Gallipoli, was for a while acting as a servant to a Captain Dowling, 7th Battalion, Royal Dublin Fusiliers. An omen perhaps?
The staff at Lady Kenmore’s were able to tell me that they knew the family (McQuade) who had sold the medal and there were no other medals.
It was thorough further research and the British Medal Forum that I came into contact with Conor Dodd, and his father. These two gentlemen have been for many years collecting and reuniting the medals of former members of the Dublin Fusiliers. The medals will form the foundation of a Regimental Museum. They also happen to have the British War Medal and Victory Medal awarded to Sgt McQuade.
So what next? After a long talk with Peter, I made the only decision I believe I could make. If the family had 'sold' the 1914-15 Star then it was mine, to do with it as I wished.
I have always believed that if I could not find the family, or a next of kin, then my obligation was to keep a soldier's medals together.
Two weeks ago a small parcel left for Dublin and now three of Sgt McQuade's medals are reunited.
For those of you who wonder. My agreement with Conor is that if the museum never eventuates, then the 1914-15 Star is returned to me, with the offer of purchasing the other medals, at the price paid for by Conor.
The cost of postage? Well let’s just say that somewhere in Dublin there is a Children's hospital, who will gratefully accept a donation of behalf of Sgt McQuade, in memory of 388 Shoeing Smith, Arthur Wyndham, 12th Light Horse Regiment.’
Bill has recently received the following email from Connor.
‘Bill,
The hope that a museum will be founded might take a long time but it is my long term hope that it will happen, even if only in a small location. I know that I never have any intention of selling any of the medals that we have and it is highly unlikely that they will ever be on the market again. But if for some unforseen reason the collection is dispersed I offer you that all of Sgt. McQuade's medals are yours free of charge.
The donation has been made to Temple Street Children's Hospital in the names you requested, it is a worthy cause. They are grossly under funded for the work that they do particularly considering the state that the country is in now. You can see details on their website.
Conor’
The last piece of this puzzle will be to locate McQuade’s DCM. 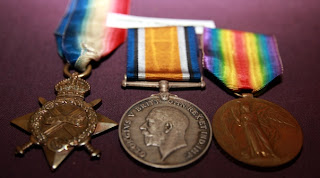 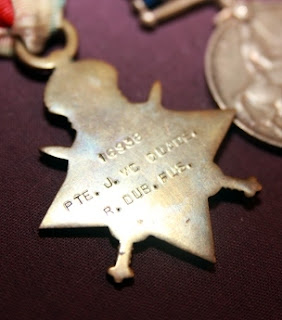 Posted by Lost Medals Australia at 12:24