217186 Stephen Fowler served with 131 Divisional Locating Battery during the Vietnam War. He tells us that his medals went missing before 1982 when he moved from NSW to WA. The medals are in pretty good condition so have probably been sitting locked away all that time.
The returned medal tally is now 735 and these are from the NSW RSL box. 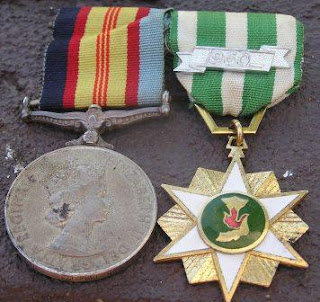 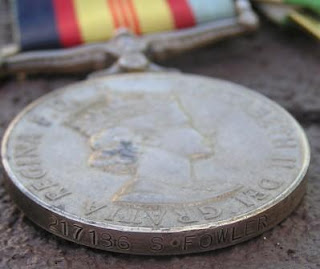 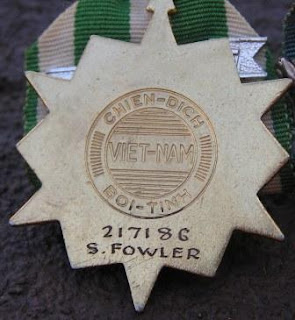 SX3890 Norman Warran Castle served in the 2/6th Field Ambulance and saw active service in North Africa. His medals (forwarded from the NSW RSL) are in as issued condition and have never been mounted for wear.
We have learnt from the family that Norman lived in NSW for many years following the war so his medals must have gone missing during that time.
The returned medal tally is now 733. 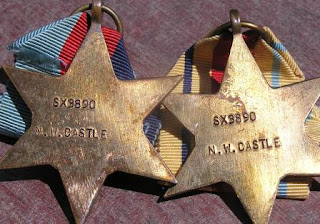 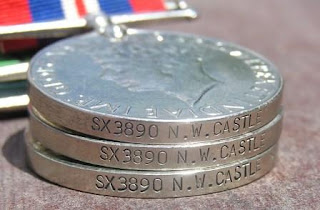 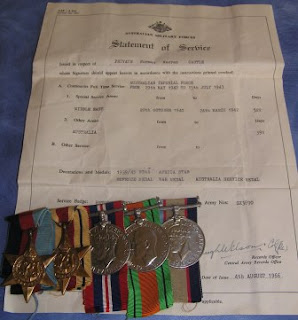 For those with an interest in the naming of medals there are a couple of interesting aspects with this group. The naming on the stars is usually squarely in the center of the reverse of the medal. However, on these two, especially the 39-45 Star, the naming is to the left (picture above). Also the naming on the rim of medals is usually in the center. On this ASM as the letters progress around the medal they tilt up. So much so that the top of the 'T' in Castle has caused the edge to swell up when it was stamped. This can be seen in the picture below.

6035 Harold Livingston Blakeney served with 22 Bn AIF. His service record doesn't give much away about what he did while in France in relation to the war.
However, most of the entries are typical of most other service records I've read. He was hospitalised with VD on several occasions and had disciplinary action taken against him for being AWOL. I'm sure his service extended well beyond these two events but there is very little to indicate where he was or where he fought.
The returned medal tally is now 728 and these are from the NSW RSL box. 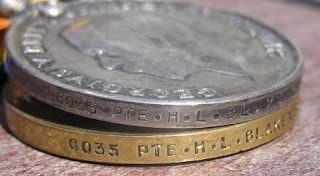 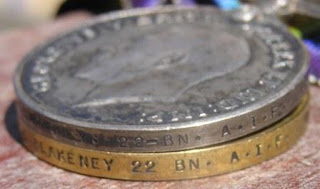 NX52573 Garnet Basil Clarke served as a commando in the 2/5 Commando Sqn during WWII. This link provides detail on the unit's campaign in PNG and Borneo.
Clarke's medals came to me from the NSW RSL. The medals where found in a house that was being demolished.
The returned medal tally is now 724. 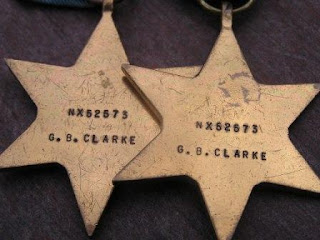 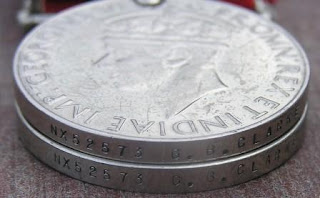 21867 Robert James McLeod served as a sapper with the Royal Australian Engineers. He completed two tours of Vietnam, the first with 8 RAR and the second with 17 Construction Regiment.
Bob tells us that the medals went missing in 1974/5 when he was involved was in a car accident and his car was towed away. It was not until he went to clean out the wreck that he discovered that someone had beaten him to it, and 'ratted' the car, taking everything of value including his medals.
Bob has received an official duplicate set of medals as well as those additional medals which have been awarded since the Vietnam War ended.
The returned medal tally is now 720 and these are from the NSW RSL box. 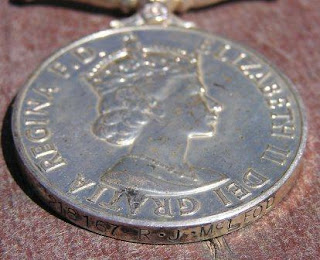 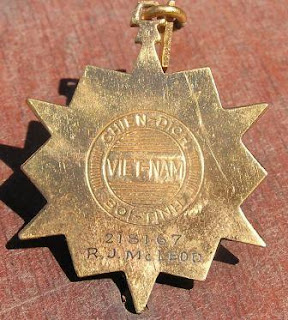 NX34125 Frederick Lancelot Bottle originally came from the Kurrajong area of NSW. This is a rural community past Windsor. I took a punt and rung a person with the same surname listed in the Whitepages as living in the same area. After a bit of checking it turns out that the person I rung is Bottle's great nephew.
While a connection with the family has been made it is still unclear how the medals went missing in the first place.
As can be seen from the photos the ribbons are in a bad way and even though they are mounted for wear as a group of four there is still one medal missing. The 1939-45 Star is not with the group.
The returned medal tally is now 718 and these are from the NSW RSL box. 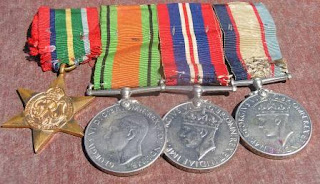 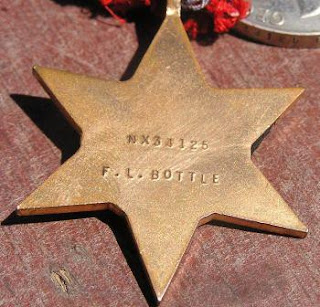 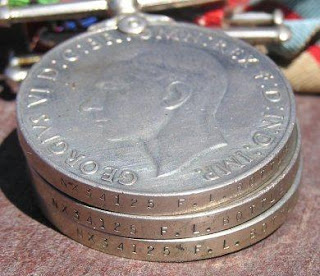 Two more medals out of the NSW RSL box are the Vietnam War pair awarded to 216773 Gregory George Fishburn. Greg was a member of the Australian Army Catering Corps and served in Vietnam with 8RAR. Bill did the work to track down Greg who tells us that the medals were lost some time ago and after living for many years in QLD and having moved back to NSW he is not sure how that ended up back in Sydney.
The returned medal tally is now 714. 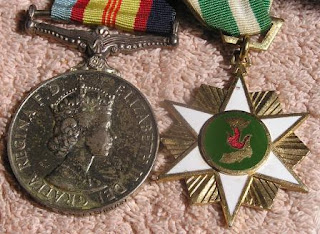 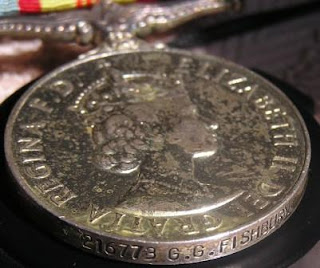 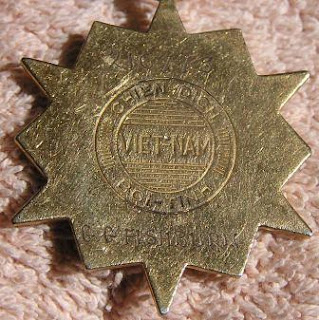 I just noticed that the ribbon on the Vietnam Campaign medal appears to be the wrong way around. That is my fault, I didn't turn the medal around on the suspender swivel to make it all look proper.
Posted by Lost Medals Australia at 15:44 1 comment:

One of our strangest requests came to us through the Victoria RSL from the executor of a deceased estate. The request was: who 'owned' the war service medals that were amongst several otherwise unknown items discovered on the death of their current 'owner'.
The executor at the time realising the value of the medals to the family concerned withheld them, pending research into whose medals they actually were and how they fitted into the estate.
Finally after considerable research, we were able to advise the executor that the medals were those of 3101 Leo John O'KANE and his son VX26838 Leo James Edward O'KANE (KIA at Buna, New Guinea in 1942). The 'owner' in question was in fact the daughter of John and the sister of Leo and the medals have now been passed to her next of kin.
The returned medal tally is now 712. 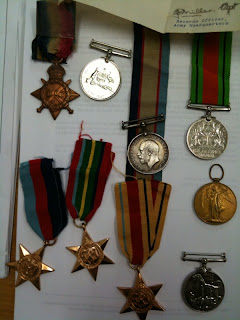 One of the medals out of the NSW RSL box is the Vietnam War Campaign Medal awarded to 216524 John Lawrence Bruce. John served with 4th Field Regiment RAA during the Vietnam War.
The returned medal tally is now 703.

971 Clement Nash Finnis served with 11th Australian Light Horse Regiment. His service record doesn't give much away about his service other than some illness, hospitalisation and disciplinary action which was taken against him.
Following the war he returned to South Australia but late moved to NSW. Finnis never married and this medal will be sent back to his nephew. This medal is from the NSW RSL box which I posted about recently.
The medal returned tally is now 702.

1st of the NSW medals returned

One of the medals in the NSW box is the SVN medal awarded to 2786975 PTE John Redman. I've managed to locate him and will return the medal shortly. Mr Redman tells me that he last saw this medal when he attended the Vietnam Veterans Welcome Home Parade in Sydney in 1987.
After having a great celebration he returned to where he was staying only to discover the next morning that his medals were missing.
The returned medal tally is now 701. 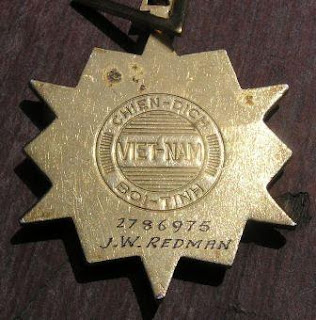 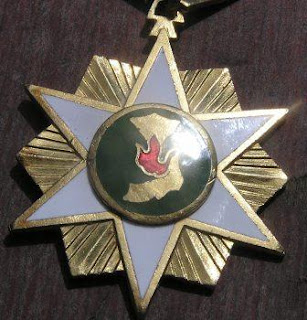 Over the years, I've established very positive relationships with the RSL National HQ and the State Branch HQs.
As I mentioned in a previous post, the WA RSL forwarded me all the medals that had been handed in to them. I've managed to return about 50% of this lot.
Recently, the NSW RSL asked if I would mind looking after the medals that they have had sent to them over the years. Needless to say I jumped at the chance.
You can imagine my surprise when I received a rather large box yesterday. It took me all day to catalogue the contents. There are 81 individual packages containing 181 medals. The majority are from WWII and awarded to NSW servicemen.
This link is to the NSW RSL lost medals page.
These pictures show the box pre and post catalogue. 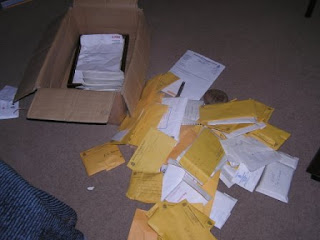 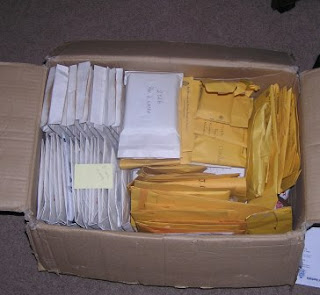 20 years ago, four medals awarded to 18801 John Reuben Owen RAN were stolen from his son's home. The medals resurfaced several years ago having been found in a rubbish bin in Melbourne.
There has been several attempts to locate Owen's family, including through the RSL, all to no avail. Lost Medals Australia was approached to assist with the search.
Through Bill's efforts and those of the wonderful Australian Surname Group members, Owen's son has been located and the medals will be returned to him.
The search was a little complicated mainly due to the fact that Owen had been christened as John Reuben ELWARD. The research details can be found at this link.
This return is significant for Lost Medals Australia as in now marks the 700th medal that has been returned.
(Pictures soon)
Posted by Lost Medals Australia at 08:20 2 comments: