W28634 Gilbert Young was 48 when he enlisted for service in WWII. At that age it is not surprising that he remained a member of the militia and did not serve with the 2nd AIF. This is indicated by the W prefix of his service number rather than the WX for the AIF.
By using Ancestry, the WA Birth, Deaths and Marriages data base and the Karrakatta Cemetery search page, I was able to put together a family tree for Gilbert's daughter Edna. I knew that her husband Arnold Keith Fleming had served with the RAAF during WWII. I was also able to establish that their son Alexander Keith Fleming served during the Vietnam War as a rifleman with 3 RAR during their 2nd tour. Alexander returned to Australia from South Vietnam in mid May 1971 but was unfortunately killed in a motor on 29 August 1971. He is buried at Karrakatta as well. Alexander, or Flemo, is the centre soldier of the three pictured below. 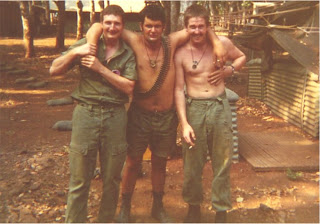 However, all these clues lead to nothing. Even though I knew what Gilbert's daughter's name was I could not find any clue to her current address or even if she was still alive. I also had no lead on their daughter after 1980.
Bill solved the final piece of the puzzle and today he located Edna who I have since spoken to.
This medal was sent to me by the WA RSL. The medal returned tally is now 1083. 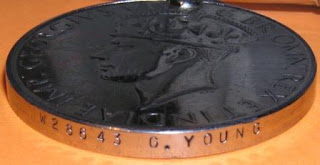 Posted by Lost Medals Australia at 21:34