We are often asked to locate medals that have been stolen or lost over the years. This is almost impossible as there is know way of knowing where the medals might now be. All we can offer is to keep the details on record in the very slim chance the medals might just come our way. That slim chance recently happened for Bill. And all done in 5 hours.

As I started to write up my notes about the search for the family of 58605 Leading Aircraftman Stanley John Burke I found myself intrigued by three things. Firstly, being born on the 3rd June 1924 and enlisting on the 22nd June 1942, Stan was only 18 years and 19 days old. It must have taken some persuasion for Stan to get his mother to sign his enlistment papers. Almost as much as it probably took to convince the Postmaster General’s Department (PMG) to release a Junior telegraph mechanic in training, so he could enlist in the RAAF. The third thing was a realisation that I had spoken to Stan’s daughter in 2014 when she told me that her father’s medals had been stolen and what advice could I give her. As it worked out I didn’t give her any advice, just the medals.
But a search is not always the effort of one person, it is in fact the sum of many contributions. Sheryl from the Avondale Police Station property office, Jan of the Banyule City Council and the Australian War Graves staff. 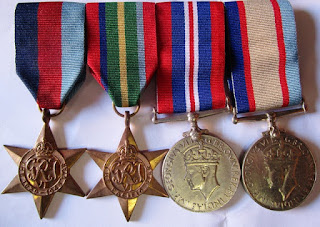 now
Posted by Lost Medals Australia at 00:36 No comments:

This podcast has some great information about the 100 Victoria Crosses awarded to Australians.

Posted by Lost Medals Australia at 15:50 No comments: