This WWII pair consisting of the War medal and the Australian Service Medal 1939-45 was awarded to NX92801 Arthur Hood Pegus. While I can't be totally sure without accessing his service record, it is likely that this is his full entitlement.
Arthur was from a large extended family. His father was one of 13 children, however, Arthur only had one brother. Neither Arthur or his brother married so my search went to the uncles and aunties. What I found is that several died young or with out having children of their own. The line I ended up following was that of Arthur's cousin. Florence Muriel Pegus who married Russell Bunham Neal. It is Florence and Russell's son Don who I have located and will receive the medals shortly.
Thanks to Andrew C who sent me the medals to me originally. The returned medal tally is now 1094. 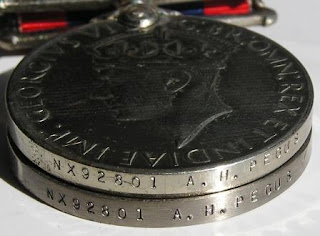 Posted by Lost Medals Australia at 20:25