This is Bill's story so here it is in his words:

'It involves the WW2 medals and the 1945-1975 ASM of George McFARLANE, in fact the ASM has not yet been added to the others.
Robert McFARLANE has spent many years trying and occasionally succeeding in acquiring mementos of his father.
Just imagine his horror, to discover that after an extensive cleanup of the house and the usual discarding of all the old boxes that have been collected over the year, his father's medals which he had carefully collected, were missing.
The question was where?.
Answer is the Salvation Thrift shop in Lilydale where several of the boxes of old clothes ended up, fortunately one of the workers recognised the medals, and after a brief attempt at finding the owner gave up. It was after medals had been through three different sets of hand that they were passed to me on last Friday night, and with help from the 'Yuku Members', War Graves, and Preston Cemetery, I eventually located Robert.
So tonight in Lilydale there is a very relieved man, first that he has his father's medals back and second that many years of searching has not been for nought.' 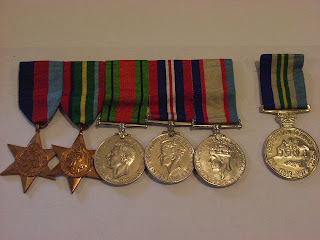 The medals returned tally is now 570.
Posted by Lost Medals Australia at 19:04 No comments:

This WWI British War Medal is being returned to the family of 6578 Fredrick James Shawman . The family name was originally SCHAUMAN but was changed to SHAWMAN around the time of WWI, possibly to remove any link to German heritage. The search has been a little difficult but a lead from super sleuth Tim L put me in touch with a lady who provided me a link to a closer decedent to Shawman. This turned out to be just the person I was looking for and the medal will be sent back this morning.
The medal returned tally is now 564.

This is another example where some of the letters are soft struck. The service number and rank are very deep but the H and W in the surname are quite faint.
Posted by Lost Medals Australia at 08:37 1 comment: