This particular search has several factors which make it a bit more interesting than the usual search we deal with.
1195 Sapper James Daniel Waddington. James was already 42 years old when he enlisted for WWI. He was a miner and working in the Kalgoorlie goldfields in 1915. Like many miners James was employed in a tunnelling company. In his case the 3rd Tunnelling Company. The story of the tunnellers has recently been depicted in the film Beneath Hill 60. There weren't many of these units on the order of battle so a medal to one of the members is not very common and it is the first I have returned. I am currently researching another member of a Tunnelling Company but the medal does not have has a unit number and just says 'Tunn Coy'
The search for James was a bit difficult as he listed a friend as his next of kin. James married very late in life and died three months after his marriage. His wife, Selina, had four children from a previous marriage and it is through this family that I've located James' step grand daughter.
Another aspect of this medal that interests me is the naming. Firstly, having the Tunnelling Company unit name on the medal is very interesting. Also the impressing is a bit messy with the second 'D' in Waddington lower than the first and the overall alignment looks wrong.
This medal was sent to me by the WA RSL. The returned medal tally is now 1095. 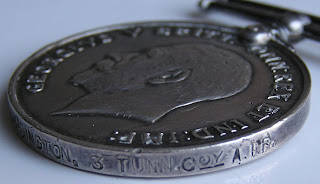 Posted by Lost Medals Australia at 09:11