It is over seven years since I first started researching the treasure trove of medals in the NSW Box.
Of the dozens of separate envelopes I received there are now only a few left. One of the cases finally came to a resolution today.
Going back over my notes I recalled that Hubert Edger James Whalley Bull was initially difficult to track down. This was mainly because he used variations of his names, often dropping the Herbert and Whalley. Also he wasn't listed in the WWII nominal roll under his WWII number of NX179259 but rather his post war number of 21097. Once all these details were resolved, Hubert was pretty easy to follow. Although I was a bit surprised that he was still listed as a soldier in the 1963 electoral rolls.
Hubert died in 1996 and I could not find any evidence that he married which led me to look at the families of his siblings. I have now been in contact with Hubert's great-niece and will send her the medal in the near future.
The returned medal tally is now 2136

Posted by Lost Medals Australia at 19:51 No comments:

Over the years we have been joined by a group of donors who kindly send us medals that they come across. Ted Ayers from York in WA is one of those who contacts me regularly with some very interesting medals.
This time he sent me two WWII medals awarded to VX6044 Charles Leslie Gay. Charles was a Victorian and as far as I can determine lived there his whole life. How his medals turned up in WA is anyone's guess.
While I did have his details from the electoral rolls it was Charles' and his daughter's death notice that gave me the best clues. The death notices lead me to Colin who is Charles' grand son. I spoke to Colin tonight and will send him he medals in the near future.
The returned medal tally is now 2135.

There is nothing that Bill and I like more than providing assistance to the Police Forces around Australia.
Early this afternoon I received a call from a colleague at 9 RQR which is a reserve unit. Like so many part time organisations, 9 RQR has many Queensland Police Service officers in the ranks. The call I received was at the end of a chain where WO2 Bourke, also a Police Officer, had a National Medal that was recovered from a property.
Based on the description of the medal I knew I was dealing with a National Medal and the details of the recipient would be on the It's an Honour website. With in minutes I was able to provide the full name of CPO Robert Carol Jansen RTD to WO2 Bourke and through his resources Robert was soon contacted. The feed back I have received is that he 'super excited' to get his medal back.
The returned medal tally is now 2133. 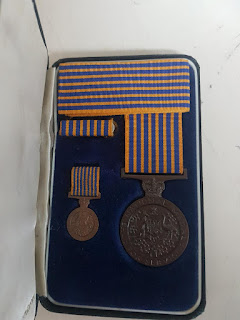 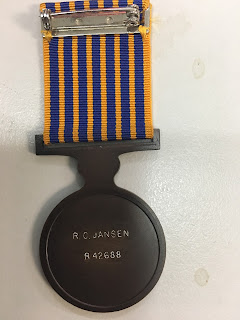