Some of the searches that we do turn out to be very easy, others are far more difficult. The quickest search I've done took 17 minutes from the time I got the medal to the time I spoke to the family. On the other hand I have medals that I purchased over 8 years ago and I've made little progress with.
Today I received a medal at 1130. It was handed to me by a gent who works in the same complex as me. At 1210 I spoke to the brother of SX 38114 Trooper Thomas Stanley Godden Sutton and arranged for the medal to sent to him. Sutton served in the 1st Armoured Car Regiment after enlisting in 1944. He served through to 1947 and died in 1954. This search was made easy by the unusual middle names that Sutton had. I used these to locate where he died. I then looked up the name in the White Pages and there were two listings in that town. I took a punt and the first number I called was the brother. This is the 479th medals returned by Lost Medals Australia.

Posted by Lost Medals Australia at 18:29 No comments:

The Internet is fantastic for locating people. We use it a lot to trace veterans and then find their families. Often the reverse occurs. All over the Internet I have posted the names of people we are looking for and family members come across these posts.
This is exactly what happened in this case, the daughter of 136273 Wallace Campbell came across our list on the NSW RSL web site and followed the links to me. Today I'll send back Campbell's medals to his family. The medals returned tally is now 478.

Posted by Lost Medals Australia at 07:36 No comments:

Lost Medals Australia has had a very successful fortnight. The medals returned count now sits at 475.
One of the latest returns is the WWII War Medal awarded to NX102698 Eric Granter. Bill tracked down Granter's nephew and the initial response was that the full medal group was together. However, on closer inspection it was discovered that the War Medal in the group was an unnamed replica. So now the original War Medal has been returned to the family and the group has been reunited.
This search, along with many others, has only been possible due to the fantastic work of Charlee, Jenn, Liz and Sharon from the Australian Surname Group. Thank you ladies.

Posted by Lost Medals Australia at 17:43 No comments:

Allen Flower's medals were stolen about 15 years ago but now one of his medals will be returned to Allen. As can be seen from the picture the medal has had a very hard time while it has been lost. (Medal returned count 473). 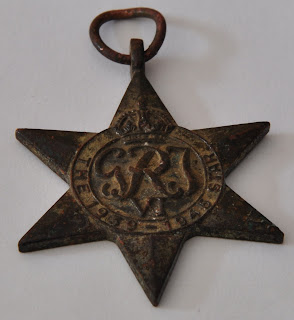 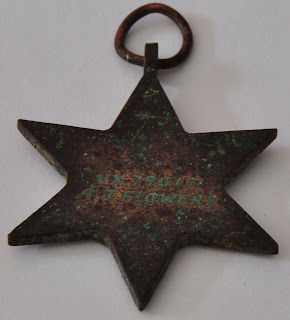 Posted by Lost Medals Australia at 17:13 No comments:

John Morell enlisted in Rabual and is listed with the service number NGX57 and NGX466. More importantly Morell was a POW aboard the Montevideo Maru a Japanese transport ship that was sunk by the US Sturgeon off the Philippines in 1942. (Medal returned count 472).

Posted by Lost Medals Australia at 17:00 No comments:

Usually I receive a single medal, sometimes a couple of medals or even the whole group awarded to a soldier. However, every so often I receive an item in the mail that is something special. In April 05 I received a photo album which told the life story of Andrew Whyte Watson. The album contained hi biography, his service history from his days in the RN Naval Division, his WWI and WWII medals and many family photos.
Watson served as C. Z-4268 AB Watson in the RNVR during WWI. He then served as NX131477 SGT Watson in the 2nd AIF.
Thanks to Bill's hard research work the album will be returned to the family in the very near future. Below are photos of Watson's medals. (Medal returned count is 466).