This story is one of a world wide search. The soldier at the center of this search was John Wellesley Flood. Flood served as a Medical Officer with the Australian Naval and Military Expeditionary Force.
The request for Lost Medals Australia assistance came from Bob D who lives in Portsmouth, Virginia, USA. Flood's BWM had come in to Bob's Grand Father's possession when he won it in a Poker game. The family kept the medal until Bob contacted us. The search turned out to be very involved and Bill had to recruit authors, web site owners and an assortment of other contacts to eventually locate a nephew of Flood's wife Rose, Richard. As it turns out Richard lives in France. So a BWM issued to an Australian Doctor ends up in the USA and is returned to a family member in France. 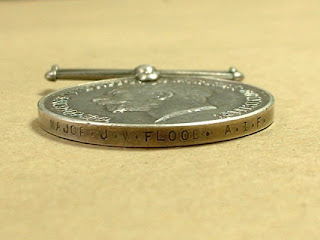