N386950 Edward Wilson was one of many Australian WWII servicemen who did not go overseas but provided valuable service during the war years. He number indicates that he was not part of the militia who volunteered to go overseas and it would appear that due to his experience on the land he was employed in that capacity. His unit on discharge was 2 Farm Coy. Based on this is it likely that Wilson would have received the Defence Medal, the War Medal and the Australian Service Medal 1939-1945. It is his Defence Medal that has been sent to me.
The search for Wilson's family was a little difficult, but through the fantastic assistance of the Australian Surname Group, a Wilson family tree was found on the Internet. This led Bill to look at Wilson's siblings, one of which was Albert Wilson who died as a POW in Borneo. Bill eventually tracked down a niece. He was known as 'Ted' to the family and I'll send his Defence Medal to her in the very near future.
The medal returned tally is now 563. 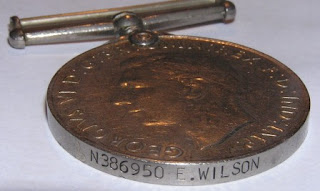 For those who take an interest in different naming styles and variations you can see that the 'E' is lightly struck in comparrison to the rest of the letters.
Posted by Lost Medals Australia at 13:49 No comments:

In earlier posts I have told the story of some of the more unusual items that we are asked to research and find the family. This particular story is of a memorial plaque erected in honour of a Australian soldier from WWII but later removed. Thanks to the dedication of a small group of people the memory of this soldier will live on.
This is Bill's story so I'll let him tell it:
'His service number VX659, and his date of enlistment the 4th September 1939, the day after the then Australian Prime Minister, Mr. Robert Menzies announced that Australia was now at war with Germany, and John's choice of Service the Medical Corps, the 2/1 Field Ambulance in particular. Tragically John was Killed in Action at Canea, Crete in 1941, and like so many of the young men who fell during the battle John has no known grave. Other than his place in the Australian War Memorial Honour Roll, his only remembrance is his commemoration is on the Wall of Honour at the Athens Memorial, Phaleron Cemetery, Athens, Greece.
But such a memorial was in the future, and too far away for the office staff at Melbourne University, who subscribed to pay for a plaque in his memory. If you consider the size of the office staff at the time, to have lost such a young member must have had a devastating effect upon those remaining.
The plaque was I believe erected in the 1940's, unfortunately with the passage of time, and the retirement of staff, much of the original history has been lost.
But as the Administration offices were rebuilt and later expanded, the plaque was moved, surviving each rebuilding, until 5-6 years ago, when the Raymond Priestly building where the plaque had last resided, was renovated, and a decision was made at the time that it (the plaque) did not fit in with the 'modern pristine white/green foyer'.
At this time fortunately one member of the staff with the help of several building maintenance staff 'rescued' the plaque, it being his intent to trace its history, and if possible contact John's family and perhaps more importantly have the plaque remounted.
For some time now the plaque has as its carer has moved also moved, occupying the space under different desks, as he researched the history of the plaque, unfortunately at the time he was unable to locate the family. It was only just recently with 11th November on the horizon that he again started to search. It was then that he found out the source of his major stumbling block, on the plaque John's name was given as John MacAllister Vincent, but there was no record of such a person having served. It was only with the advent of the new online search program that allows for variations in spelling of names, that he discovered that the Army had recorded John's name as John McAllister Vincent.
It was at this time that he posted of to various friends the story of the search and his problems, one recipient of the email, a member of the Watsonia RSL club, and who himself had retired from the University 5 years ago, contacted me with a request for help, and the rest is as they say history.
To say John's family is happy is an understatement, they always knew of the plaque, but where it had disappeared to, that was the great unknown.
Now the final stage is yet to be set, and the plaque, that friends and colleagues contributed to honour the memory of a brave young man, awaits the final act.'
Well done Bill.

Posted by Lost Medals Australia at 20:49 No comments:

The majority of medals I deal with are those awarded to WWI AIF soldiers. Every now and then something extraordinary comes my way. This week I received the 1914-15 Star awarded to ON2725 ORD SEA Sydney George Burley. The service record details are a lot less than what is available for a soldier but there was enough detail to work out movements around Australia. The next lead I followed was to Burley's son also named Sydney George Burley who served during WWII. Then the trail ran cold.
It was time for the experts to step in and Bill and the Yuki ladies put it all together. From initial contact by the person who donated the medal to me until we contacted the family was two weeks (thank you ladies). The story of Sydney and his medals is full of gaps. It was found in the possession of a chap who died last year, why he had it or how he came by it is anyone's guess. How it left the Burley family is also a mystery. None of that really matters now as I'll be returning the medal to Burley's great grandson who is a serving member of the Australian Army so I know it will be in very good hands.
The medal returned tally is now 562. 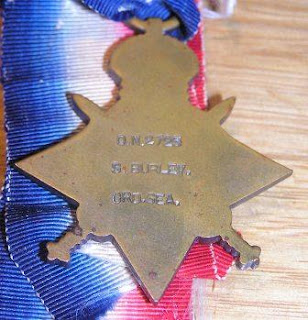 Posted by Lost Medals Australia at 11:47 No comments: