This search has proved to be very difficult. VX149934 William Offer served with 12th Small Ships Company which is a rather well known Australian Army unit from WWII. Unfortunately, the trail for a family member went cold with William having had no children. Bill did some fantastic research to work his way through the family of William's sister and find the closest relative that we could.

Medals returned tally is now 543.
Posted by Lost Medals Australia at 20:09 No comments:

A great book for kids

In the Military Related Links on the right hand side of this page is a link to Your Defence. This site is a fantastic resource for ADF families.
The ADF kids books is a great idea for helping to explain to the children of ADF service personnel what it is that their parents do in uniform. I think it will also go a long way to help the broader community understand what military life is all about.
Of particular delight to me is the Army edition which includes a picture of my medals. This entry explains what the slang word 'gongs' means.
Posted by Lost Medals Australia at 14:35 No comments:

What has this medal been through?

This medal has had a very hard life. It is the WWII War Medal awarded to NX162773 Harold Francis Horton. As you can see from the pictures the suspender has broken away from the medal. Also the impressing on the edge is not very distinct. I suspect that at some point someone has tried to remove the naming. Finally the medal is very dirty particularly around the text on the obverse. Despite all this we have found the family and the medal will be returned very soon. 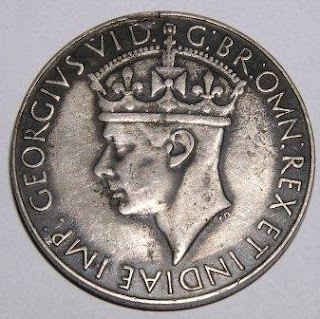 The medal returned tally is now 539.
Posted by Lost Medals Australia at 09:26 No comments:

2LT Gordon Minto Browne enlisted (no 517) on 21 November 1915 and was allocated to 42nd Bn. He was eventually commissioned and wounded very late in the war and died of his wounds on 2 October 1918 at Mont St Quentin, France. He is buried at Tincourt New British Cemetery (Plot V, Row J, Grave No. 3), France.
The medal has had a very hard life having lost its suspender. This is the 538 medal returned by Lost Medals Australia.

Posted by Lost Medals Australia at 20:04 No comments:

This group of five WWII medals awarded to QX11131 John James Mossison has been with me for a bit over three years. Bill did some great research to track down the family and the medals will be returned next week.
Medal returned tally is now 537. 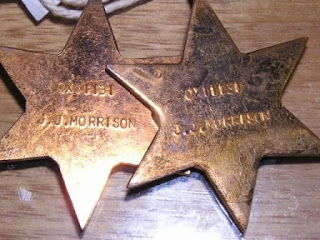 Posted by Lost Medals Australia at 19:54 No comments:

This Africa Star to WX11265 John Goydon Curtis has been lost for some time and was only recently sent to me. Once again Bill's good work quickly located the family. The rest of the group are still missing but this one will head home soon.
The medal returned tally is now 532. 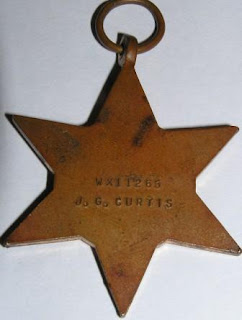 Posted by Lost Medals Australia at 16:52 No comments:

3266 SGT Edward Snell was born in Queensland but spent some time in WA before WWI. He followed the gold rush as he puts his trade down as a miner and he served in the Goldfields Regiment. When he enlisted his father lived in Marble Bar, WA and that is where Snell was buried in 1960. His medal was sent to me from Dampier, another town in the North West of WA. The medal has had a hard life with the suspender bent and several dents. However, it is on its way back to the family. I would like to make special mention of Jade who was able to find and check the missing records for accuracy. This ultimately assisted us locating the family.

The medal returned tally is now 531.
Posted by Lost Medals Australia at 21:24 1 comment:

Today I received a medal in the mail that was not familiar to me. Just by looking at the medal it wasn't hard to work out it is a Vietnam War commemorative medal. That is a non-official medal. The details on the edge are: W.S. McLean 7158. Once I got home form the post office I looked up McLean on the Vietnam War nominal roll. He originally came from Kingaroy. There is one W Smith listed in the Whitepages so I took a punt and rang the number. Sure enough it is the same man. From the time I sat at the computer until the time I confirmed this was his medal took a total of 3 three minutes. 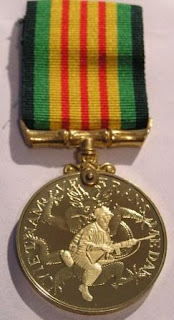 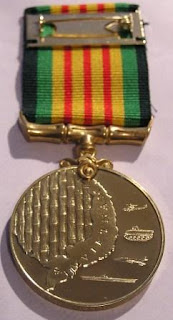