This story started out as a search for the family of a pretty ordinary 1939-45 ASM but it turned out to be anything but.
I knew the medal was in the mail but when it arrived last Friday I soon found the medal itself was a little bit different. First of all this is the first ASM I've handled that was awarded to a female member of the RAAF. Secondly, the naming is a little different to most examples of the ASM. After WWII each service was responsible for the issue of medals and there was differences in the naming conventions. For example the majority of Army medals were impressed but RAAF medals were burr engraved as is the case with this one.
The medal was awarded to 91396 SGT June Mary Bassett who was part of the movements and transport organisation of the RAAF. I was able to follow June through the electoral rolls and work out that she never married and that she died in 2002.
I then started to look at the broader family. June's father, Arthur Brookes Bassett served in WWI as 853 Gunner Bassett in the Artillery. During WWII he first served as V80317 Private Bassett in a Garrison Battalion and then as 250904 Squadron Leader Bassett in the RAAF. Arthur divorced June's mother and remarried. He had another daughter from his second marriage but she has also died. The direct line of this family lead me to dead ends.
I found a family tree which started to make this search really interesting. Arthur's mother was Caroline Loxton who was the aunty of Australian cricketing great Sam Loxton. This made Sam the 3rd cousin of June but I knew there would be a closer relative so I had a look at Arthur's brother Walter Eric Bassett. I initially worked back wards through Walter's life but then had to move forward to locate his children. It is probably best to tell this part of the story chronologically.
Walter saw service as an engineer during WWI starting as a 2nd Lieutenant. In April 1916 he was awarded the Military Cross for conspicuous gallantry in action. Later in 1916 he commenced training as a navigator in the Australian Flying Corps and was taken on strength of the AFC in April 1917. Shortly after this, on 5 June 17, Walter received severe gunshot wounds. He took his discharge in England at the end of the war. I have found a family history website that has several photos of Walter during WWI and in his later life. I have reproduced a couple of these photos below.
Walter went on to have a distinguished career as an engineer. His Australian Dictionary of Biography entry makes interesting reading. In 1959 Walter was knighted and one of the photos I found shows Viscount Slim investing Sir Walter with his KBE. Unfortunately, WWII saw tragedy for Walter and his wife, Flora, when their eldest son Orme drowned while on active service. Orme is buried in the Ambon War Cemetery.
I'll be returning the medal to June's brother Peter who also served in the RAAF during WWII.
Thanks to Andrew C who sent me the medal and to John L who provide details on the Bassett family for me. Also thanks to the author of the Tales of a family website from which I borrowed some photos and information. The returned medal tally is now 1090. 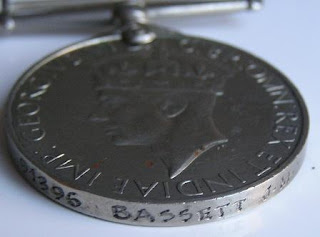 Walter in England during WWI 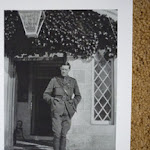 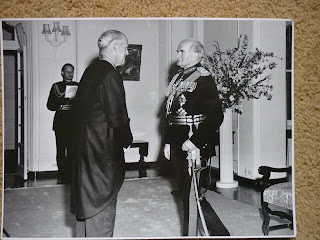 The photos is of group photo of No 4 Initial Training School, RAAF. June's brother Peter Bassett is in the centre row, 5th from the right.

Posted by Lost Medals Australia at 10:27