There isn't really a story here.

I have just completed a research task for Australia Post but the details aren't for publishing. The broad story includes the Battle of Long Tan, items lost in the mail and no return address.
The returned item tally is now 1608.
Posted by Lost Medals Australia at 18:56 No comments:

A Christmas Tale – A Work in Progress
It has been for all us a hectic year, and yet I do not believe that 2015 will be any less so.
One of my duties with my local RSL club is arranging for members and family and for anyone else for that matter, to have medals mounted or as is now often the case re-ribboned.
So to those of you who follow this  Blog and read my story on Frederick Glover in particular, the need to have medals properly mounted, should come as no surprise
So please read on:
In the last week I have been approached by three families with regard to having medals mounted (See Photos), in all cases they were accompanied with similar words.
“These are Dad’s, I don’t know about the other two.”
“I think no I know it’s the wife’s grandfather. But the spelling is wrong”
“There is no one called Hill in our family, extended or not”
“He could have been my great-grandfather’s cousin”
“I found them amongst dad’s medals”.
“My father in Law was a POW, he never spoke of it”
And so the story begins in reality.
Currently I have lodged two applications on behalf of families, to firstly determine what medals the recipient was eligible for and what he received, and where necessary to claim any such posthumous awards.
So far.
Yes the medals are the wife’s grandfather’s. It is a nuisance when one medal is engraved Mac, and the others Mc.
The other’s well one belongs to a soldier with flat feet (yes I know it has nothing to do with the story), who stayed in France after WW1, to work with War Graves. I am assured that it was out of a sense of duty, and had nothing to do with Jeane Julia Lasson whom he married in July 1919.
So to our regular readers. Watch this space. 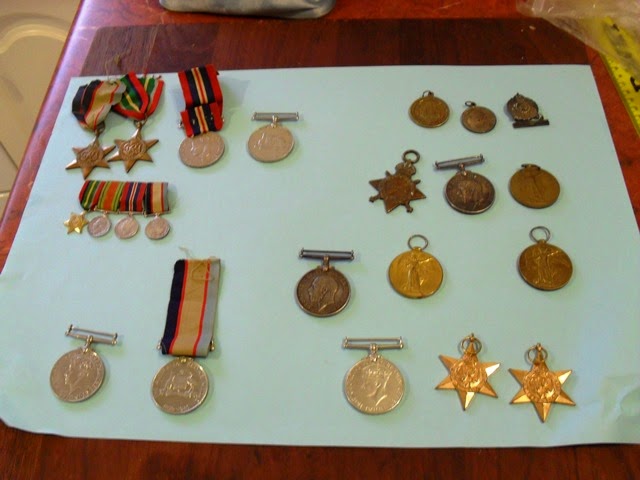 When I received the WWII group of six medals awarded to NX9039 George Enoch Brimble I thought that it be a pretty easy search based on his name. I was right that it was easy but for an entirely different reason.
Through the electoral rolls I followed George to 1980 but then he disappeared. I couldn't find a record of his death or that of his wife. It appeared that George and his wife separated about 1958 and here was no children from the marriage. A check back of the Brimble family gave me his sister's name and that she lived in a small town in NSW called The Rock. I'm quite familiar with this town as it is just south of Kapooka where I've been posted to a couple of times.
George's niece married a local gent and a check of the White Pages showed me that a couple with the same initial and surname combination lived in The Rock. I took a punt and called the number and was soon speaking to George's niece. She confirmed my research about George, 'her favorite uncle' and also told me that his grand father, Tom Brimble, was killed in action during WWI. Tom was a member of 45th Battalion, AIF and has no know grave but is commemorated at the Australian National Memorial, Villers-Bretonneux, France.
Thanks go to Keith Harrison of the SA RSL who sent the medals to me after they had been handed in. This wasn't the quickest search I've concluded but it still took less that 20 minutes from the time the medals arrived in my letter box until I was talking to the family. The returned medal tally is now 1604.

This is Bill's story about VX123013 Roland Gilbert Renison.

“In 1990, what’s that about 22 years? It was well before Dad’s death’
So went the reply from Trevor when I asked him when he had last seen his father’s war medals.
It was not till after his father’s funeral, that Trevor discovered his father’s home had, as he put it, been ‘ratted’. Countless items, including his late mother’s jewellery, his father’s watch and medals had been taken.
His surprise when I contacted him in November was total. He admitted given up any hope of seeing the medals again.
The search for Trevor was complicated. In part because Trevor’s mother, while buried under her given names, had always preferred to be known as Joanne. This only became apparent when I found out that she had been buried in the same plot as Ronald.
With a death notice, and the help of the Australian Surname Group and research that came up with a whole series of odd facts including one that Trevor may have been a builder, that took me to the HIA.
It was less than 15 minutes after I hung up from talking to a very helpful young lady that Trevor was on the phone to me and hence the introduction to this story.
I cannot conclude without mentioning Shirley and Allen. They had been passed the medals many years ago, had spent countless hours trying to locate Ronald or his family and who were willing to entrust me with returning them.

Yet another success from Bill:

This request came from a constable at Fawkner  (Vic) police station who had been handed an Australian Service Medal 1939-45. From my  research I believe our man served initially in the Militia then transferred to the RAAF. During his time with the RAAF he served in PNG.

And that is where the printable story ends. The family circumstances of this veteran are complicated and difficult. Out of respect for the family member that Bill located we are keeping this short and acknowledging the research skills of our friends of the Australian Surname Group. There are also some Police matters pending.
The returned medal tally is now 1595.
Posted by Lost Medals Australia at 20:07 1 comment:

Another great collaboration between Bill and the fantastic researchers from the Australian Surname Group.

Many requests Glyn and I get these days from Western Australia originate either from the WA RSL or the WA Police. However, in this case it came from ‘Jim’ in WA via the Victorian RSL.
His message in part was:
‘I have recently come into possession of a 1914-1919 great war medal, belonging to 3424 PTE D M J McNeil, PTE McNeil's nok was his father Donald McNeil, the McNeil's lived at 159 Flemington RD, North Melbourne. As an ex serving member I would dearly like this medal to be reunited with PTE McNeil's family. I was hoping you may be of some assistance with this in this case’.
And so the search began, however, a few points that Jim added when I spoke to him were:
He had been given the medal from a 'tin' of his father's, along with the usual collection of badges, buttons etc. Its background was that his dad had found it at the local tip, (tip scrounging was a favourite pastime of children and it didn’t cost anything) but what is even more remarkable is that the tip has been closed in 1980, but Jim's father had found the medal, back before WW2.
Douglas McLean’s story is like that of so many veterans from the first world war. Douglas's marriage did not last, following the breakup of the marriage, he moved to NSW where he worked for the NSW Government Railways.
When WW2 started he enlisted, but shortly thereafter he was discharged as medically unfit. Not to be outdone he returned to Victoria and enlisted again, figuring that if they did not want cooks, the occupation that he put on his forms in NSW, then he would promote himself to a Golfing Instructor. It was with this trade that he found himself guarding the POW camp at Tatura, Victoria.
The Army in NSW had been right, Douglas was not a healthy man, the effects of his Gun Shot Wound from WW1, finally caught up with him and he died of heart failure in December 1941. He was laid to rest in the Tatura Military Cemetery.
From the Australian Surname Group's postings I found that his son Donald Cleveland McNeil had served in the RAAF during WW2. He had been named after Douglas' brother. Donald (number 1) was a POW of the German's during WW1. He contracted influenza and died shortly after being liberation.
With all these postings, information from the State Library and a very helpful young lady at a funeral home, I followed the path to Robin, the granddaughter of Douglas. Dawn, the wife of his son Donald, I found out is still alive. Although her memory is a little dim with the time, she still remembers some of the past. She currently lives with her daughter Robin and her husband who care for her.
To add to the story from his service during WW2, Douglas is eligible for the 1939-1945 War Medal, and the Australian Service Medal 1939-1945 which were not awarded. Last night I drafted of a letter for Robin and her husband, which I emailed to her along with a posthumous medal claim form.
Currently I am awaiting a photo of the medal from Jim, which I will post along with the result of the claim for Douglas’s WW2 service.
The returned medal tally is now 1594.
Posted by Lost Medals Australia at 16:07 1 comment: