This Victory medal awarded to 2nd LT Mark Alan Wallace Tuite is one of the few we have remaining from the NSW RSL box. Quite quickly I located the details about Tuite's death on 2 Dec 1917. However, it was the rather tangled family tree complicated by numerous deaths during WWI that made this search difficult..
Tuite was from an aristocratic family with many senior officers amongst them. His great grand father was the 9th Baronet of Sonagh. The Baronetcy has now passed down the line of his great uncle. In that branch alone there was a Major General and many who served as subalterns. Mark's father was a naval officer, his uncle (10th Baronet) was a Colonel and his cousin a Lieutenant Colonel whose body was never found. As part of my search for a close family member I have received some great information from a distant relative. This is a summary of the information I have received:
1. 1911 Census. Mark, born Hampstead, was working as a journalist and living with father Henry, mother Marion and sister Honor at 45 Croxted Road. Father, Henry, was employed as an etcher, probably of photos since he was a photo engineer in 1901 and a portrait artist in 1891.
2. Messines & Third Ypres. Extracts from Landships-British Tank accounts of the First World War - sites.google.com/site/landships
Messines. 7 June 1917
6 Company. B Battalion with 25th and 36th Divisions, and the II ANZAC Corps (H2), 2nd Army
9 Section - Capt. Croxford
B41 2035   2Lt Tuite
Account of Operations - 9 Section: Three tanks reached their objective to find the infantry (H2), who had started earlier than intended, already there. B41 (2035) reached O27c at 9am engaged a battery at 250 yards range and thus enabled the infantry (H2) to capture it then returned to the RP. The Battalion history states that three tanks reached their objective and helped mop up. The battle graph indicates only B41 (2035) fired on the enemy.
Third Ypres. 31 July 1917
6 Company, B Battalion, with II Corps, 5th Army
9  Section - Lt AC Harcourt
B41 2035  “Boomerang”  2Lt MAW Tuite
Account of Operations - 9 Section: Three tanks proceeded to the junction just east of Clapham Junction where they found the infantry held up by MG fire from Glencourse Wood and Inverness copse. B41 (2035) engaged an enemy MG but became ditched south of the Menin Road. They engaged the enemy who were counter attacking towards Chateau Wood. B41 (2035) successfully unditched using its unditching gear but was unable to get up the Bank onto the Menin Road.
3. LT Harcourts's DSO. 'On November 30, in the attack to capture Gouzeaucourt, this officer led his section of tanks into action. When one of his section commanders, 2nd LT Tuiet, was wounded, this officer, borrowed a horse and rode back for a stretcher, which he then took back under shell fire' Harcourt survived the war and went on to command 2nd Royal Tank Regiments in North Africia in 1940/41. He died in 1946
4.  Mark's Cousins. Lt-Col Henry Mark Tuite was wounded in command of the rearguard action when Vauix-Vraucourt was lost on 24 March 1918. His body was never found and he has no known grave. Lt Brian Hugh Morgan Tuite survived the war but a gunshot wound to his left arm, 9 October 1916, necessitated an emergency partial amputation in France followed by a secondary amputation in England.
Mark is one of 22 relatives who perished in WW1 that I'm researching via Google. I add the retrieved information to my family tree on 'ancestry' in hope that the site is available long after I'm gone.
Thanks to JP for all this great information and to Simon from the British Medal Forum for his assistance. I'm now contacted the most appropriate branch of the family to receive the medal. This Victory Medal is in almost as issued condition and how it got to Australia is a mystery.
The returned medal tally is now 1408. 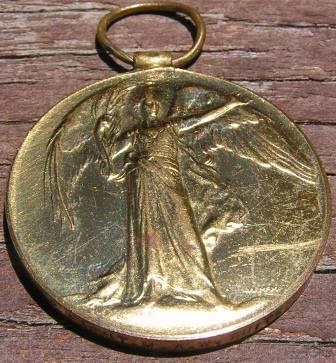 This search was a little complicated because of the soldier taking his step father's name but keeping his own surname as well. Once I had sorted that out it became a bit easier to located details about William Irvine Dyce.
William was 19 when he was killed in action at Gallipoli. Luckily, this bio provided a wealth of information about William's wider family. The bio also contained a photo which I've added below. William's brother didn't survive for many years after WWI due to his own injuries so the immediate family line appeared to end. Using Ancestry.com there was no clues which indicated any family connection for me to chase down.
Knowing that William was from a small island community I took a punt and wrote to the local paper, The Orcadian, to see it I could locate any family members. Shortly after publication of this letter I received an email for the a great niece of William's on his mother's side. The medals will be sent to this family in the near future.
Thanks goes to Max of Geraldton who acted as the intermediary between donor family and me. The medals were originally obtained by another veteran with the sole purpose of returning them to the family. How they turned up in Australia is anyone's guess.
The returned medal tally is now 1407. 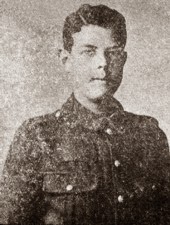 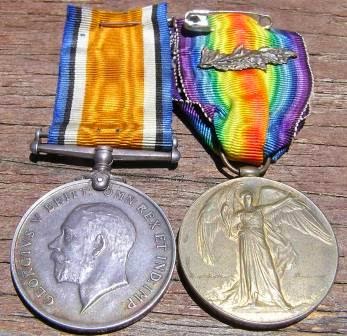 Regular readers will remember the story of Cyril McCarthy and his WWI dog tag that was recently found in a French field. This is the original story, update 1 and update 2.
This search came to a wonderful conclusion recently when I received the dog tag from Philippe in France and arrangements were put in place for me to meet Cyril's grand son Bernie and hand it back. ABC journalist Jennifer King wrote the original story that started this journey and has also been heavily involved in bring it to a close. This link has Jennifer's on line story and an embedded video of the TV news report.

This is a very short story which does not do justice to the hours of research put in by Bill and Liz from the Australian Surname Group.
I received the Australian Service Medal 1939-45 awarded to NX72330 Alan Herbert Barcham from Heather K in January 2011. The suspender bar on the medal is missing which is how I suspect that the medal became separated from the rest of the group. Thanks to Liz's research, Bill was recently able to contact Alan's son and I'll return the medal to the family in the near future.
The returned medal tall y is now 1405.