Another story that doesn't do justice to the full circumstances and the research that went in to finding this family.

Shortly after 0400 on 20 December 1915, the last Australians left Gallipoli, among those to leave was the 8th Battalion, 1st A.I.F.
Seven months later on the 26th July 1916, the battalion would again go into battle, this time spearheading the assault on the German lines at Pozieres.
Gallipoli always comes to the fore when any discussion takes place concerning WWI. Gallipoli with its 29,000 casualties in eight months, yet at Pozieres, Australian casualties would amount to 36,960 in the 6 weeks from 16 July to 13 August 1916, as the battle ground on, and German artillery, took a dreadful toll.
2198 PteLeslie Reginald Yates of the 8th Battalion, would take his place in that assault and was killed in action on the 26 July. Later he would be laid to rest at the Pozieres British Cemetery, Ovillers-LaBoisselle, Somme, France.
This was battle that would prompt Australian WWI correspondent Charles Bean to report that the Pozieres Ridge was "more densely sown with Australian sacrifice than any other place on Earth".
But the losses at Pozieres and Fromelles some days before, were to have a lasting influence as the scale of losses became known to those living in Australia. It would trigger much of the subsequent conscription debate and the failure of the Australian Government to have conscription accepted by the Australian people.
At the request of the two families involved, I have not included the search details, either of John, who found the medals and plaque and spent considerable time trying to locate Leslie’s surviving family.
Recently, I was able to email to John the contact details of Michael, the grandson of Leslie’s brother James, who also fought in WWI.
In the coming months John will travel from Brisbane to Avoca in Victoria, to pass the medals and Leslie’s memorial plaque to Michael. To hold on behalf of and in memory of his Great Uncle Private Leslie Reginald Yates.

The returned medal tally is now 1903. 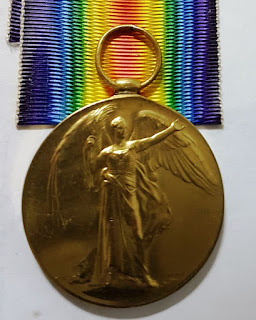 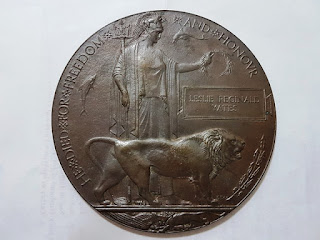 Posted by Lost Medals Australia at 18:34 No comments:

There is very little to this story from Bill but what we can tell speaks volumes.


When Edward Reuben Thompson died in 1938, his medals and the souvenirs, including letters to his wife, written during his military service were lost to his family.
Some time ago the Victorian Police recovered one of his long missing medals, how and where they cannot say, but to Edward’s daughter Beryl it doesn’t matter. Ten years old when her father was killed, she grew up always wondering what happened to her Dad’s medals, and while I could not tell her where they have been, what I was able to tell her this morning is that her father’s 1914-1918 War Medal is waiting for her and her son at a Victorian Police Station.
To the officers of Victoria Police who recovered the medal and to Kaye and Scott, also of the Victorian Police, on behalf of a veteran’s 86 year old daughter, thank you.

The returned medal tally is now 1900

Posted by Lost Medals Australia at 18:17 No comments:

Another return with no story to tell

Our latest return does not differ greatly from several returns I have handled this month.
However, due to the circumstances and to protect the anonymity of the ex-serviceman whose items they are, Glyn and I have followed our rule, of refraining from writing any details about the veteran, nor how we came to finally find him.
The returned medal tally is now 1899. 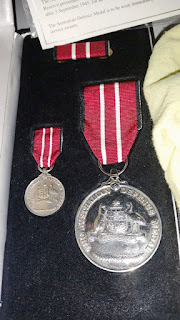 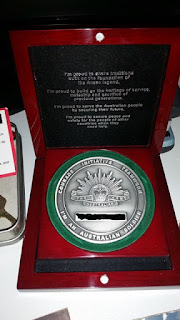 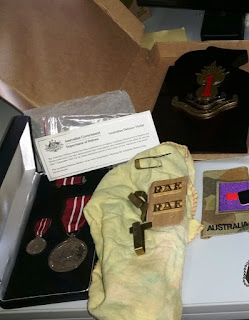 Posted by Lost Medals Australia at 19:50 No comments:

Some times the story of the medal is just as intriguing than the solider. This British War Medal was found 20 years ago by Matt and Jo and as can be seen in the pictures it has had a rough life. It looks like it was run over or churned up by a mower.
The soldier was 240 John (Jack) Gerard Kiniry who served in the 3rd Pioneer Battalion. Jack was from a Irish Catholic family who produced many priests and nuns. He did marry but had no children with his wife Mary. A letter that Jack wrote to his uncle was reproduced in a newspaper and I found it on Trove. I've included it below.
Like many families of the time they became extinct despite being quite large. I happened across a family tree which included the Kiniry family but the line was down Jack's mother's branch. The tree owner has kindly accepted custodianship of Jack's medal.
Thanks to Jo and Matt for sending me the medal.
The returned medal tally is now 1896. 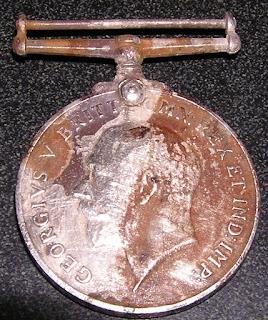 Posted by Lost Medals Australia at 19:27 No comments:

Lots of medals but not much of a story to tell


Over the years Glyn and I have developed a close relationship with the various State Police Forces. Quite often we are the first port of call when it comes to returning medals that they have seized. However, with that relationship has come the responsibility of limiting what we can say either about how the medals were recovered or how we were able to return them.
Also we owe the people to whom medals have been returned, a responsibility to respect their privacy. Accordingly the next few returns I will be posting will fall under this mantle. Other than to say well done John, Shaun, Ante and thank you for your trust, there is little more that I can add.

The returned medal tally is now 1895. 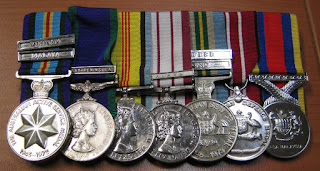 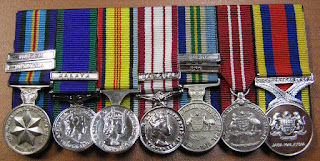 Posted by Lost Medals Australia at 20:10 No comments: