When is something lost?

We often have to unravel some very difficult family connections. This one is probably the most difficult. Bill did all the work so I'll let his words tell the story:

'When is something lost? Obviously when you can't find it. But what if the situation is reversed, you found it, but don't know who lost it? And that in a way has been the story of the search for the NOK of 3541 Private Joseph ROBSON.
On his death in August 2008, William George FORBES's daughter was given the task of cleaning out William's 'back room'. Among many items of interest, she found the First World War medals of a Joseph ROBSON. After quite some effort she came to the conclusion that Joseph ROBSON was not a member of the family, so who was he and how did her father get the medals?
It was at this point after a subsequent follow up through the RSL that the problem of Joseph ROBSON landed on my table, or should I say alongside my computer, with the cryptic comments that the daughter "can't find him and neither can we" (the RSL). It's nice to be wanted but when you are often the court of last resort, I'm not sure. Who was Joseph ROBSON, what was his background? So it was YUKKI's turn, and as it is sometime said 'a rum old do it turned out to be', while there were ROBSONs, and in fact quite a few, Joseph and his details from his service papers never quite seemed to gel, there was always something odd about the dates, in particular the disparity in the ages. Then came a different tack, could Joseph have a brother, what if we tried using his mother's name as a search item?
So it was back to Joseph's file and a search using his mothers name, well the name he had given as his mother's was URBIN. Now on his enlistment Joseph gave his mother's name as ROBSON. Later it was changed to URBIN. Using URBIN as a search item brought up the file of Joseph LETHLEAN and a further search of Joseph LETHLEAN brought up a second file also in the name of Joseph LETHLEAN. It was not until some time that the three files finaly interlocked as follows:
1. Joseph LETHLEAN first enlisted in the AIF on the 7/12/1914, using his mother (Agnes URBIN) as his nect of kin, after some time he was discharged medically unfit.
2. He then waited 14 months when he again enlisted, only this time he used the name of a friend, a Mrs ANDERSON, as his NOK. But to no avail for on the 15 August 1916, Joseph was again discharged as medically unfit.
3. On the 24 April 1917, he again attempted to enlist, only this time using the surname ROBSON, his mother's maiden name, with URBIN as his NOK. This time he succeeded, and the 11 May 1917, found him departing for France, where the losses coupled with the failure of conscription at home in Australia, had left the AIF so dangerously short of recruits, that many things for which a person had been rejected earlier, were now overlooked.
The war would not be easy for Joseph, first gassed on the 12 August 1918, and evacuated to hospital, he would again suffer a second gassing 6 weeks later. With the complications of being gassed twice, for Joseph the war was over. Discharged on the 31st March 1919, Joseph ROBSON other than appearing to claim his medals and request a replacement of his discharge papers 'disappeared'.
So now it was a case of following the only certain lead that of the family tree of Joseph LETHLEAN, who died at the Heidelberg Repatriation Hospital in 1951, aged 66. It was from this research that the following story comes.
After his discharge Joseph LETHLEAN is said to have introduce his youngest sister Priscilla to Robert MCDONALD, who later married and established a boarding house in North Melbourne. One of their first boarders was Joesph LETHLEAN, having now discarded the name ROBSON. It was their daughter Flora Irene MCDONALD whose marriage to William FORBES in 1939 that took this story almost to its final conclusion. William's death in 2008 brought to light Joseph ROBSON/LETHLEAN's medals.
Now try sitting down and explaining all that to a young lady who having discovered medals among her father's collectibles has spent nearly two years trying to give them away, only to be told she doesn't have to, they belonged to her family in the first place and have for over 80 years.
There is also another saying I must remember 'pride goeth before a fall', particularly when last November I thought I had finally worked it all out, only to find that the niece I first 'discovered' and persisted in following through to her discovery, was not a niece, in fact she was not even related to the family.
So there ends the story of Joseph ROBSON a man who while not falling into the category of 'never was', certainly led an adventurous life for all that he had.'
Here is a picture of Robson and his medals. 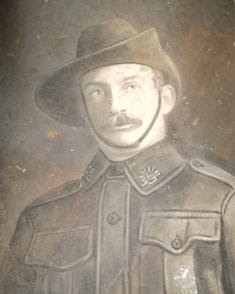 Posted by Lost Medals Australia at 07:50 No comments:

I recently received a Queens South Africa Medal awarded to PTE S.Yeardley Cape Medical Staff Corps. I decided to put up a post now rather than wait until the search is resolved as the medal is not one I usually deal with and putting Yeardley's name out on the Internet might pull in some more clues.
Through the British Medal Forum I was provided a link to the Boer War nominal roll that has Yeardley's name although spelt Yardley. I also found the original of this list. Unfortunately neither gave me a clue as to where Yeardley came from. I took a punt and searched the AIF data base and came up with this hit. I got a bit excited when I saw he was an MM winner but nothing linked the S. Yeardley of the Boer War to the S. Yeardley of WWI. So off I went to the Australian Archives and found this record. On the first page was a clue that they might be the same fellow. In answer to the question about previous military service there is the comment; '12 months 21th Field Hospital Anglo Boer War'. This is by no means conclusive but a very strong link.
Making the assumption that they are the same fellow I started searching the NSW BDM as WWI Yeardley was discharged in 2 MD (NSW). Given the clues from the service record I located some details for Samuel Yeardley who married Doris Parr in 1924 and died in 1961. Doris was born in 1891 and died in 1978.
Bill posted all this on Australian Surname Group and they have found some great information. I'm sure that it wont be long until a relative of Yeardley is found and in the mean time here are some pictures of his QSA. 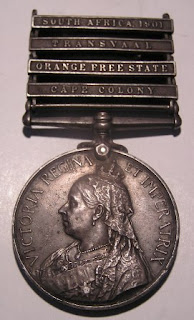 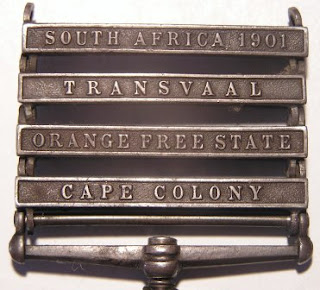 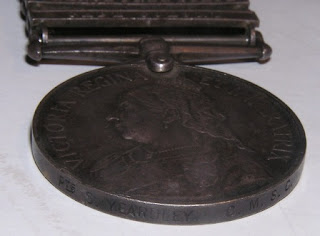 This WWII group of five awarded to NX161316 Warren McLeod is nothing spectacular. They were awarded to a soldier for two years service from 1943 to 1945. However, 65 years later we will be returning this group to McLeod's sister who is very excited about this. Also the title says it all, this group marks the 600th medal that Lost Medals Australia has returned to a family. 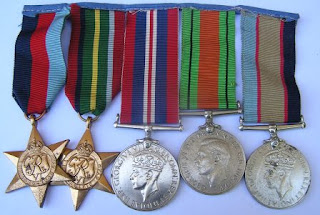 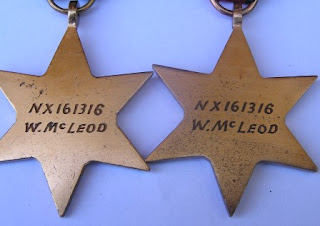 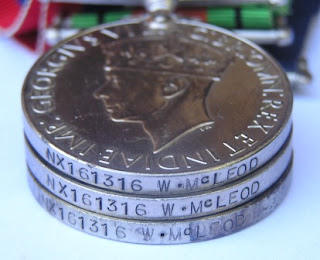 For those interested in difference in naming styles these medals show a couple of differences. The stars are named by burr engraving rather than being impressed. This style is more common for WWII RAAF stars. Also the impressing on the ASM 39-45 is some what softer struck than on the other two medals.
Posted by Lost Medals Australia at 10:56 No comments:

2136 Frank Hedley Gordon Coomber was an 18 year old grocer from Perth when he enlisted in 1915. He was wounded in action in France in 1916. His service record has some really interesting entries, including a letter from Coomber dated 1963 about an appointment to the Corps of Commissionaires. At some point he moved to Melbourne. His medal came to me from Perth and will be returned to family in Sydney. The returned medal tally is now 595. 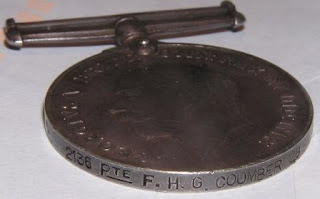 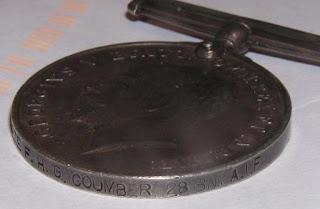 Posted by Lost Medals Australia at 19:51 No comments:

The medal return to Teddy McLean has had several chapters which are detailed in this link. As a result of this return the St George and Sutherland Leader News Paper recently ran an article which tells the last chapter of this story.
Posted by Lost Medals Australia at 19:37 No comments:

1668 PTE Harold Allen served in 48th Bn with his brother 3650 PTE Clarence Allen. Harold was killed in action in France on 11 Apr 17. There is a series of interesting letters in his service record which talks about his War Medal which will soon be returned to his family. 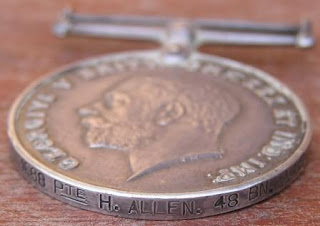 The returned medal tally is now 594.
Posted by Lost Medals Australia at 18:42 No comments:

I thought that the search for PM7923 Frederic Keith Smith would be a difficult one. Such a common surname is difficult to trace unless there are some specific clues available. The WWII service summary didn't help too much and with an enlistment date of January 1945, I thought we would have real problems. Luckily his full RAN record of service was online at the NAA. Although only two pages in total, there was enough to kick off the search.
With this initial information, an uncommon married name for his sister' some lateral thinking and a bit of luck we have located Smith's daughter. 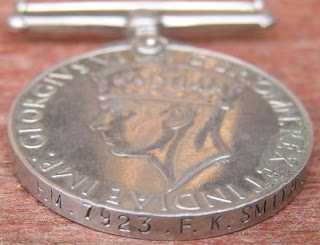 The returned medal tally is now 593.
Posted by Lost Medals Australia at 18:44 No comments:

In the entry for Teddy McLean I mentioned that the medal we returned would join other memorial items related to McLean. I've now added a picture of the Memorial Plaque.
Posted by Lost Medals Australia at 08:41 No comments:

7178 PTE Axel Lundberg enlisted in the AIF at the age of 36. Here saw service in France but there is very little detail on his service record. There is more information about the time he was AWOL while travelling back to Australia in 1919. 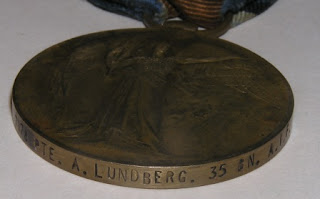 The medal returned tally is now 592.
Posted by Lost Medals Australia at 18:39 No comments:

This WWII group was awarded to NX103270 CPL Sydney Charles Wood. There was not a lot of information available on Wood and it took some effort to locate his family. In the end we located Wood's brother who is also a WWII veteran. Once again through Bill's persistence and the assistance of the Yuku team, another set of lost medals is being returned to the family. I must also acknowledge Tracy B who was concerned about these medals in the first place and wanted then to be returned. 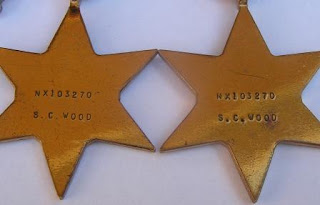 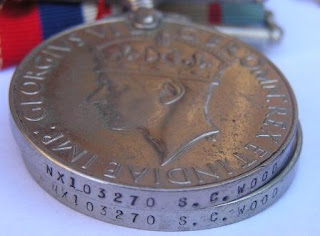 The returned medal count is now 591.
Posted by Lost Medals Australia at 18:45 No comments: