Three of the medals awarded to 41944 Corporal Ivan Lindsay Harrison, RAAF, were recently sent to me by Bernard D of Kotara, NSW. Having now spoken to Ivan's nephew, I know that Ivan was a Coast Watcher in PNG and would have been entitled to two more medals.
The medals are in as issued condition and never worn, they are also typical of RAAF WWII issued medals, being hand engraved rather than impressed. David tells me that after living in Melbourne after the war, Ivan moved to NSW which probably explains how his medals ended up there.
Thank you to Michael B for the part you played in helping me located David. For anyone who knows me well they will understand why I smilled when I found out what David's name was. The returned medal tally is now 1297. 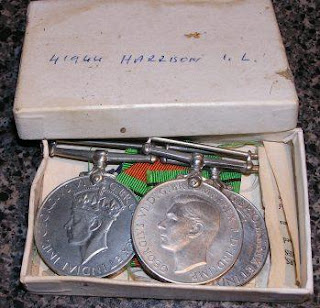 I received the Victory Medal awarded to 1893 Garnet Wolsley Howland from Barbara H of Lithgow. After she came across the medal, Barbara visited the Australian War Memorial and my details were passed to her. Once I  had Garnet's service particulars from Barbara, it took 15 minutes to find one of Garnet's sons, Jack. Garnett served with 35th Battalion, AIF. Jack Noel Howland served during WWII and spent four years a POW.
The returned medal tally is now 1294. 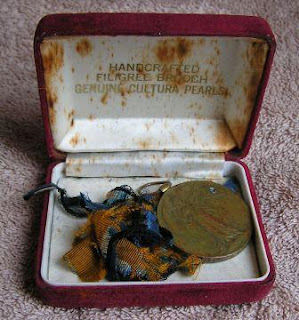 It is vary rare that I post something here that is not directly related to medals that we return. However, two very good friends of mine will be appearing in a Sixty Minutes story tomorrow night. This link is to the promo for the story about Fromelles and the part Sandra and Tim's have played in the research of this tragic chapter in Australia's military history.
Posted by Lost Medals Australia at 11:54 1 comment:

In June 2011 I posted the story about the medals returned to the Farley family by Mick of Brisbane and the part Lost Medals Australia played. This is the link. Today I was contacted by Mick again who has come across more medals awarded to QX42659 Robert Farley. Once again I've connected both parties and soon two more lost medals will be returned.
The returned medal tally is now 1293
Posted by Lost Medals Australia at 19:45 No comments: