It never ceases to amaze me how often my research is somehow linked to someone I know or in close proximity to where I live. This is another such example.
I was recently contacted by Mick D who found a pair of WWII medals at a bus stop along Bungandore Rd in Bywong, NSW. Bywong is a rural area about 20 km north of Canberra and is where I've been living since August.
The medals were awarded to NX177391 Neville Frederick Podmore who was born in Tarcutta, NSW.
Neville died in 1975 but I couldn't find a death notice. From the electoral rolls I worked out his wife was Linda and she died in Canberra in 2007. There was now a geographic link to why the medals were in this particular area. Then I hit a brick wall until I found Neville listed on the Ancestry tree of Colin P.
Colin fired off a message to Neville's niece and shortly after that I was in contact with Neville's daughter Lynelle, also a Canberra resident. Having found the family, I connected Mick and Lynelle and they are arranging to meet. As it turns out Neville's son also lives in Bywong and the medals were accidentally dropped at the bus stop. Mick did a wonderful thing by starting the journey to see these medals returned home.
Many thanks go to Colin and Wendy for helping me join all the dots.
The returned medal tally is now 2175.
Posted by Lost Medals Australia at 05:06 No comments:


Another international return thanks to Bill.

It is nearly 8 years since Peter Harrison, a retired Australian Army officer and his wife Eileen brought home to Australia the 1914-1915 Star awarded to 16938 Sgt McQuade,Royal Dublin Fusiliers.
As a return gesture, in August this year he took back to England the British War Medal awarded to 557332 Private Philip Klawansky, 1001st Labour Company, to return to his family.
The history of the Labour Corps reflects, in many ways, the social history of Europe during the First World War and the changes it brought to Europe.
With conscription, it was expected that a citizen of an allied country would be enlisted into the British service or return home to serve in their own countries forces. For many Russians in the UK, which included a large Jewish population, fighting for the Tsar was not a favoured option, given that many had fled Russian persecution. This reluctance was not exactly greeted with enthusiasm in Britain so one of the solutions was the formation in the British Army of the Russian Labour Companies who served in France and the Middle East. Despite their name they were under British Command.
Out of respect for the family, I have censored my research. However, if anyone reading this Blog should wish to go a bit further down the path of history, may I recommend: John Starling & Ivor Lee's excellent work No Labour, No Battle - Military Labour During The First World War.

The returned medal tally is now 2173. 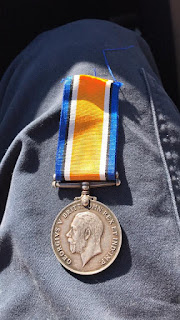 Posted by Lost Medals Australia at 00:37 No comments: