Knowing where and how a set of medals has been found often quickly leads us to the recipient or, as is more often the case, their next of kin. Unless it involves the Police.
Confidentiality and legal obligations, often means that we (Glyn and myself) sometimes go around in circles. The search for  VX72799 Gunner Thomas Charles Feeley was a case in point.
Today as I spoke to Barry, his son, he admitted that he could hardly wait to phone his sister and tell her that dad’s medals, stolen quite some time ago, had been recovered.
In this case, as I was later informed by a Senior Constable, ‘recovered’ was the appropriate word.
At the request of the family, who it must be remembered have gone through the trauma of loss of their father’s medals once, I will say no more. 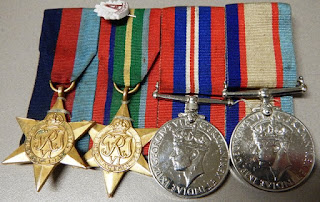 Posted by Lost Medals Australia at 17:43 No comments:

When I opened an email the other night I was rather surprised at the medals that had been found thrown in a skip bin. They are the Australian Defence Medal and the Australian Sports Medal. The skip bin business owner passed the medals to former ABETP Jason M who then contacted me.
While the box for the ADM gave the name and service number of the soldier this was a bit of a false lead as the ADF has changed its personnel numbering system since this man served.
A search of the old service numbers didn't give us any clues so I checked it'sanhonour for the list of Australian Sports Medal recipients. I found that John Bown had received this medal. This was the clue we needed and part time researcher Dave C was able to work out that were were looking for John Charles Bown. Dave also found out that John served with SASR. Through the 1990s and 2000s John worked with a couple of city councils and was well know in ALF circles. Unfortunately, John died in 2009. A road is named in his honour in Floreat, WA.
Once I had John's full name and date of death I was able to use a process of elimination to work out his son is David Bown. I was able to contact David today and connect him with James so that the medals can be returned.
Thanks Jason as well as Mark and Cathy Terry from Cheapa Skips, Crompton Rd Rockingham. Also thanks to Dave C from my office.
The returned medal tally is now 1749.

Posted by Lost Medals Australia at 17:24 No comments:

This is a story of the Anzac spirit being renewed.
For a while now we have been collaborating with Ian from Medals Reunited New Zealand. Yesterday, I called on Ian's local expertise for a search that started when I received a New Zealand Defence Service Medal from Australia Post. The medal, still in its box of issue had come apart from the mail packaging. The medal was awarded to LAC J D Stewart RNZAF.
I assumed that LAC Stewart moved to Australia at some point but with out his full name it was difficult to track him down. I sent the service details to Ian and his immediate response was:
'as an aside, I served with a Flight Sergeant John Stewart, Communications Operator, at RNZAF Wigram from 1972-87; service number is about the right vintage, lost touch after 1990.'
What would the chances be that my contact would know this person?
First thing this morning I received a reply from Ian that this indeed was his former colleague. Through the NZDF we were able to get in contact with John and I've arranged to send him his medal. A really nice addition to this story is that only today, John was at Sydney airport about to board a plane to New Zealand for a holiday. Now that contact has been re-established, John is going to go and see Ian. The timing couldn't be better.
Thanks to Jac, my contact in Australia Post, Logan of the NZDF and Ian of MRNZ.
The returned medal tally is now 1747. 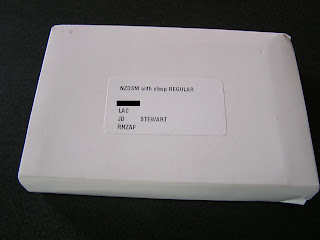 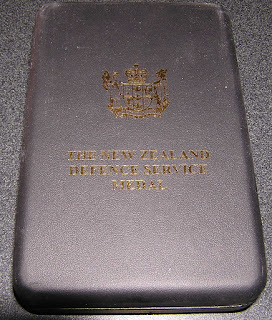 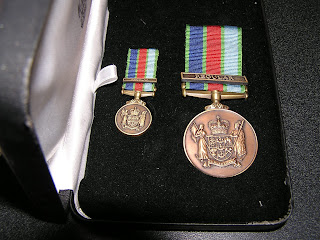 10821 Louis Joseph Angelo Cleary served with an interesting unit, the 3rd Divisional Train. This was was a logistics organisations which supported the 3rd Division and consisted of four service corps companies, a salvage company, three field ambulances, a sanitary section and a mobile veterinary section. He is listed as a driver and moved between units of the Divisional Train including a field ambulance, an Entrenching Battalion and an Advanced Horse Transport Depot. Louis died in 1944 as a result of his war service and has a War Graves Commission head stone.
With a name as distinctive as Louis Joseph Angelo Cleary it was easy to follow him through the electoral rolls but at that point the search became far more difficult. The search commenced in May 2014 and was only finalised today. Louis married Kathrine, however, they did not have any children. Louis also stopped using Angelo so the records became a bit confusing.
With no direct descendant I started looking at Louis' sibling. He had four brothers and three sisters. Unraveling each of these families created more confusion for me. Of those who did marry I could only find one who had any children who then went on to have families of their own. This was Percy. His son John served during WWII as a legal officer. It was through this line that I was able to contact Louis' great nephew Elaine.
Thank you to Suzanne S of Canberra who sent me the medal.
The medals are in as issued condition with the original ribbon which is close to 100 years old and in remarkable condition.
The returned medal tally is now 1745. 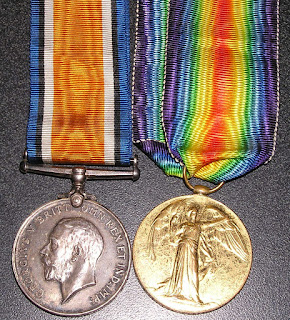 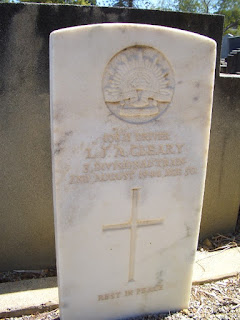 Posted by Lost Medals Australia at 21:03 No comments:

The Holbrook family were from England and immigrated to Australia around 1911. They settled in Balingup, WA where they were farmers. Two sons, Thomas and Frank enlisted for WWI. This medal was awarded to 1877 Driver Frank William Holbrook who served with 10th Light Horse Regiment.
After WWI Frank returned to farming. Frank's son was named William Frank and I'm been in contact with William's wife who I'll return the medal to.
Thomas Holbrook did not survive WWI. He died of wounds received in May 1918. Thomas' wife Emma died in December 1918 leaving two young sons as orphans.
Thanks go to Diane M who sent me the medal and the Bernice Holbrook who assisted me with this research.
The returned medal tally is now 1743.

Some months ago I was contacted by Betty Lesage from France who had a WWI dog tag which she thought belonged to an Australian soldier. It took a while to work out but the soldier was actually 1837 Percival Hackworthy, a British solider.
Luckily, the Hackworthy family has quite a bit of information on line and I was able to connect Betty with Percival's great nephew Steve. Betty has recently let me know that she has sent Steve the dog tag.
The returned medal tally is now 1742. 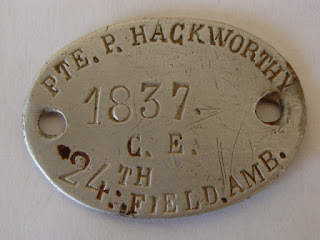 Posted by Lost Medals Australia at 10:32 No comments: