The resolution of this search came about after a number of small threads came together to present the full picture. A little bit of luck also went my way.
1856 T-CPL Michael James Fitzgerald originally enlisted with the 3rd Light Horse Regiment. His service record doesn't provide much detail about where he served but it would appear that he transferred to the field artillery as a driver and ended up in France.
I couldn't find any evidence that Fitzgerald married so my search extended to his siblings. After a false start in March this year I revisited the search yesterday. Fitzgerald was one of 13 children, one sister was Bridgett who married Reginald Roy Shanks. I found an interesting story about a deserter that Shanks was sent to arrest.
It is through Bridgett's family that I focused my research. Reginald and Bridgett son was Gerald who in turn had three children. As luck would have it I found a family tree which provided me the name of his daughter and who she married. This name is quite unusual and I could only find one similar on line. Taking a punt (yet again) I called this person and sure enough I had the right family. The lady I spoke to is Fitzgerald's great niece and I'll send her the medals in the near future.
Thanks goes to Ken Duncan who sent the medal to me originally.
The returned medal tally is now 1404.

This is one search where time didn't quite work in my favour.
I received the WWII War Medal awarded to 449645 Thomas Ray Bradley in March 2012. Using service records and the electoral rolls I was able to follow Bradley and his family up until 1980. One firm piece of information I did find was that he went by the name T. Ray Bradley and was a doctor.
There is a significant amount of information available about Dr Bradley on the Internet mainly to do with his research in to the treatment of cancer. He was also made an Officer of the Order of Australia in 1990. What I wasn't able to find was any contact details. Appeals to the research institutes that provide prizes in Dr Bradley's name yielded no additional information.
Yesterday I revisited this search and I immediately got a hit on Dr Bradley's name, unfortunately it was his obituary. Dr Bradley died in August 2013.
Thanks to Dr Ray Marginson, the obituary author, and Dr Juliet Flesch, I was able to contact Dr Bradley's daughter, Julie. Thanks also goes to Andrew Cairns who originally sent me the medal. This concludes the research of all the medals that Andrew has forwarded to me.
The returned medal tally is now 1402.

Posted by Lost Medals Australia at 14:02 No comments:

6010481 Leslie Lewry saw service in the British Army during WWII for which he was awarded the 1939-45 Star, the France and Germany Star, the Defence Medals and the War Medal. He then served in Palestine as part of the British involvement following WWII. For this Leslie was awarded the General Service Medal. Luckly this medal is named so I was able to start searching for him.
In the 1950s Leslie and his wife Elvery moved to Sydney and eventually settled in Perth. Using the electoral rolls and cemetery records I was able to gain a solid picture of their life in Australia. Unfortunately, they did not have any children.
By going backwards through the British records I established that Leslie had two brothers, Richard and David. It is through David's family that I have locate a family member to return theses medals to. Having focused most of my search in the UK I find that I'll end up sending these medals to Brisbane.
Thanks go to Pam McG who sent me the medals.
This return takes us past a significant milestone. The returned medal tally is now 1401. 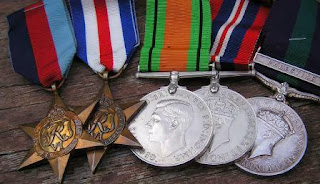 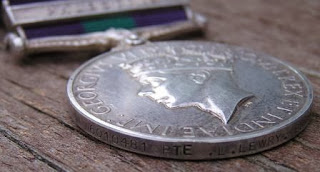 From start to finish this search has taken over 6 years. Using the service record of 493 PTE Ernest Arthur Horne, 6th LHR, I could work out snippets of his life. Ernest was 39 when he enlisted for WWI. Prior to this he had served for 8 years with the Natal Mounted Police. He saw active service on Gallipoli and after the withdraw he served in the Sinai and Palestine campaign. The service record also provided the date of his death in 1950. Using this date I could match up his death from the NSW BDM and confirm that his father and mother were Robert and Elizabeth Horne. The NOK details given upon enlistment were his mother, Mrs E Horne at an address in London and his sister, Mrs William MacKinnon of Aberdeen. Then the trail went very cold.
Evey so often I'll revisit a search to see if anything new can be found. I've had a look at he Horne search several times but no new information has ever presented itself. That was until today. Using William MacKinnon as a start point I found a MacKinnon family listed in the Scottish 1901 census living in the same street as appears in the service record. The wife was listed as Alison F MacKinnon. More searching showed that Alison F was in fact Alison Frances Horne, the daughter of Robert and Elizabeth. 10 minutes after starting I had the link I needed.
Using all these new names, I found a family tree on Ancestry that included Alison and Ernest. The tree owner lives in Perth so a little more searching gave me a phone number and I was soon talking to the descendants of James Charles Horne the elder brother of Alison and Ernest.
The first 6 years of his search was pretty difficult, however, the last 60 minutes proved very successful. As can be seen from the photo this Victory Medal has had a hard life. It has been heavily polished as the details of the angels face are not very distinct. The edge is very dented and looks to have been run over with a lawn mower.
Thank you to Deborah N who sent the medal to me in June 2007.
The  returned medal tally is now 1396. Yesterday I was visited by two wonderful friends, Karen and Steve Betterton. Over coffee Karen dived in to her bag and retrieved a WWI British War Medal. It had been found amongst her families possessions but the soldier was not a relative. The medal was awarded to 2215 PTE Thomas Horace Victor Wingrave who served with 18th Battalion, AIF.
Thomas was about 30 when he enlisted and with such a distinctive name I thought he would be easy to follow. Using the electoral rolls I could follow him from Victoria in 1909 to Queensland in 1913, back to Victoria after the War and final to NSW where he died in 1942. The information was a bit thin but it was more the story it didn't tell which helped me make some assumptions. Based on the lack of any evidence I assumed that Thomas didn't marry or have children.
I then went back to the WWI service records and using Thomas' birth place as a start point I was able to connect him with 4525 PTE Wisdom Herbet Wingrave. This then lead me to LT Frederick John Wingrave, Wisdom's son. Frederick served with 2nd Pioneer Battalion, AIF and there is a picture at this link of the battalion's officers. Frederick is in the back row, third from the right.
By using all these names I was able to locate a family tree on Ancestry.com.au. I fired off a message earlier this afternoon to the tree owner and I've since heard back from Joan who is Thomas' great niece. Joan tells me she met Thomas when she was young and was able to confirm that he didn't marry.
Thanks to Karen how gave me the medal.
The returned medal tally is now 1395.

Earlier this year I received a parcel forwarded to me by my friend Sandra which contained service documents, dog tags and a Lodge medal belonging to Kevin Stuart Spencer. I've now located Kevin's sister and I'll be sending all these items to her in the near future.
The returned medal tally is now 1394. 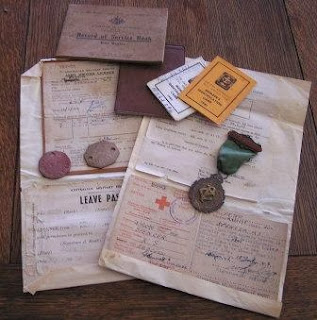