14369 PTE Charles Henry Jacklin was from Louth in Lincolnshire, UK. He served with the Lincolnshire Regiment during WWI and fought in France on several occasions. He received a gun shot wound to his shoulder for which he would later get a pension. In 1917 Jacklin was captured by the Germans and held as a POW. After the war he returned to Louth where he died in 1961.
What I find interesting is that the medal was sent to me from Rockhampton in Queensland. However, I'm sure that Jacklin spent no time in Australia, but the medal will be returned to a relative who does live in Australia. Jacklin was entitled to the WWI trio and the BWM is pined to a trio ribbon bar. I'm not sure if this is Jacklin's ribbon bar but I have left it exactly how it came to me, even if it means the ribbon bar is upside down and the BWM is on a Victory Medal ribbon.
This search was conducted primarily using sources available on Ancestry. The medal returned tally is now 1089. 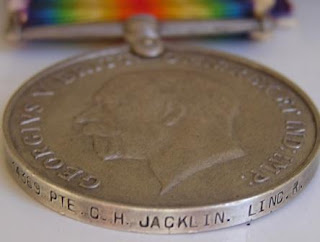 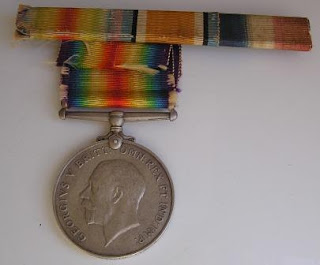 Posted by Lost Medals Australia at 19:27