This story did not turn out as expected. It started with an email from Debby from the Nowra RSL who had three medals awarded to 27234 Major John Frederick Miller. Debby just happened to be in Canberra yesterday and dropped the medals off at my place last night.
The first issue, which can be seen in the photos, is that someone has attempted to erase the service details off the medals. This is a very clumsy job but the details are still visible.
The next surprise I got was when I did a internet search for John and got the hit, a story on the Medals Gone Missing page. My colleague Gary had returned a South Vietnam medal to John and very kindly provided me with John's email.
I have since spoken to John and the full story has come out. John's medals were stolen in 1981. At the time his medal group consisted of five medal. The one Gary returned, these three and an MBE. Since then John has been awarded six more medal including a CVO and an AM. John also has official duplicates of the five medals that were stolen.
As part of the Medals Gone Missing research, Gary came across a couple of photos on the AWM web site which show John and I've included these below.
Thank you to Debby and the Nowra RSL.
The returned medal tally is now 1938. 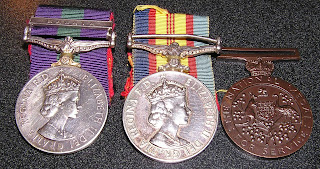 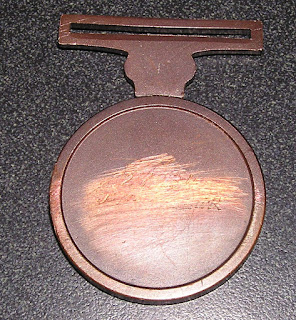 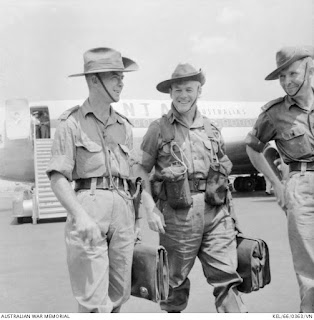 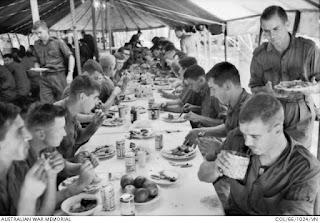 Posted by Lost Medals Australia at 20:13 No comments:

With a name like William Wallace Roy Smith I thought that finding this soldier's family would be easy to track down. That was far from the case.
What I found interesting in William's service record was he was a prisoner of war. The details about this are a bit thin. He was originally reported missing then confirmed as a POW. It wasn't until December 1918 that he was repatriated to England.
I've filled a index card with crammed notes about William's family but getting to the current generation proved impossible. Ancestry provided some information but nothing concrete after 1980.  In desperation I asked Anne to revisit the research. Similarly, she hit many brick walls. We were on the verge of giving up when I did a last check of Ancestry to find some new information that lead us to William's grandson.
Thank you to Alan Kitchen who sent me the medal in 2010.
The returned medal tally is now 1935.

Fantastic work by Bill and a reflection of his great relationship with the Victorian Police.


The search for the family of VX12569 John Edward Dixon owes as much to the Companies Registration Database, as any of the myriad of records I followed to find John’s son, Graeme.
It also owes a debt of gratitude to John, who found the medals in an alley and Gary, a member of the Victoria Police and guard at the Shrine of Remembrance. Gary recognised these medals for what they were; a testimony to a young man’s service to his country. It was Gary who started the process to return the medals when he contacted ANZAC House in Melbourne, seeking assistance and it was at this point I became involved.
John Dixon passed away in 1963, his wife Joyce in 1977. Unfortunately, with time many records are no longer in existence, some because they have been disposed of after being damaged through fire or water, others have been the victim of computer upgrades and not transcribed completely or accurately. Also with time, people move, phone numbers change, and the memory of neighbours also seems to dwindle.
Despite all this John’s medals are home, how we got them there, to the family it doesn’t matter and I must admit this, keeping in mind the number of times I found myself back at the beginning, neither do I.

The returned medal tally is now 1934. 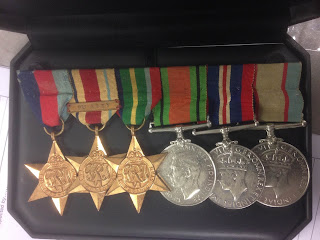 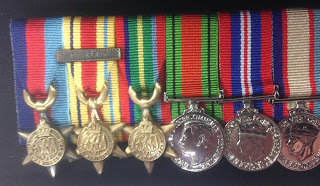 Posted by Lost Medals Australia at 20:03 No comments:

Another story with not a lot to tell

George’s medal have gone home.
From being found in a rubbish bin in Melbourne in 1997 to Perth in 2016, these medals have been a long journey. So where have they been? I can’t say, nor at the conclusion of the search, can I begin to guess.
Traced back through several different organisations, each of whom appeared at some time to try and locate either ‘George’ or his family, I initially came to the conclusion that searching for a next of kin was not going to be easy. I was right. But with the help of a few good people and a large helping of stubbornness (mine) the most important thing is that in the end, George’s medals are home.
Out of respect to his memory and his family, I will say no more.
To Elizabeth, Diana and Mike, at RSL Branch Headquarters, Victoria, thank you.

The returned medal tally is now 1922.

Posted by Lost Medals Australia at 20:55 No comments:

It will come as no surprise to readers that we have very close links to ex-service organisations, or ESOs. One of Australia's best know ESO is Legacy. I was recently contacted by a senior member of Legacy in Victoria about the Philippine Liberation Medal awarded to 51070 FSGT Ewan Clive Quick. The medal had been found in a unit and handed in to Legacy.
David from Legacy had done some great work to eliminated a whole lot of possibilities but when he hit a dead end he contacted me. Ewan's name is reasonably uncommon and it didn't take long to find him in the electoral rolls. From there I worked out the names of two sons and found one in the White Pages. Armed with the phone number, David has been in touch with the family and the medal will be sent home soon.
The returned medal tally is now 1916.
Posted by Lost Medals Australia at 20:16 No comments:

The research behind this return is extensive. I've added some of the details of Anne's research to get to the point where she could identify the closest relative of V502360 Frederick Allan Anthony Hicks.
The returned medal tally is now 1915.

Letter written by Nora Hicks (known as Bonnie) to a children's page, confirms her address at Corowa

There is no way to tell this story that does it justice given its complexity. The best way is just to copy in Anne's notes which also show the lengths we go to in order to locate a family.

William SMITH
WX482 period of service 7/11/1939 to 18/3/1940
WX7019 period of service 30/7/1940 to 7/11/194
Born 4/12/1911 Huntly Scotland
Died after 1971
NOK WX482 Bonner
NOK WX7019 Annie Roper
Father William Smith died 1912
Mother Georgina Fraser died 1915
Explaining William Smith’s Next-of-Kin
Annabella (known as Anna, Agnes) Bonner was related to Georgina Smith (mother of William Smith). Annabella Bonner had a child out of wedlock, also named Annabella. William Smith’s parents took Annabella in and raised her as their own child. Anna Bonner is thought to have married about times and one of her names was MacKinnon.
In 1925 Annabella Smith came to Australia on the Themistocles. She worked to save money so that more of her family could also come to Australia.
William Smith arrived in Australia in 1927 on the S S Bendigo, with him was another sister Christina Marybella Smith, Mrs Annabella Bonner and her two children, William Alexander and Esther Mackinnon. William Alexander MacKinnon’s next-of-kin on his WW2 record is Anna MacKinnon.
Records of William Smith on historical Electoral Rolls show that he lived with the Mackinnons, Anna Bonner and in 1963 with his sister Christina Marybella Skinner. So the names for next-of-kin on William Smith’s war records are Bonner – his aunt, then Annie Roper – adopted sister, cousin.
His sister Christina Marybella Skinner did not have any children, she married a widower who had one child.
James Albert and Annabella (Anne, Annie) Roper had two children, both still alive and in their 80s.

It is one of these children, Bert, who I spoke to tonight ans will send Bill's medals to. This is a fantastic piece of research by Anne.
One piece of information I came across was that Bill fought with the Italian Partisans and is mentioned at this link.
The returned medal tally is now 1914. 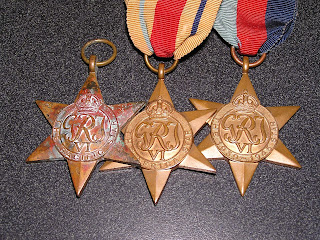 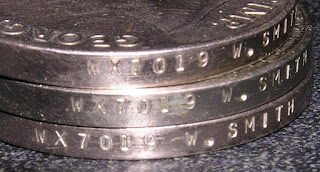 Posted by Lost Medals Australia at 20:26 No comments:


A wonderful story from Bill.

For me the first challenge in finding the family of John Patrick Maloney was in trying to decide who had John’s right date of death; War Graves in Canberra or The Age Newspaper, or did I have two people. Then it became a simple course, well not exactly simple, of trying to build a matrix of John and his family around time and space. This was complicated by matching an ex-soldier who marched with his veteran mates in Adelaide, who died in Melbourne, but whose family lived in NSW.
The search for the next of kin of Private John Patrick Maloney began with a phone call from Senior Sergeant Les Nugent of the NSW Police, and at this point I will stop and let Les tell the story.

Bill
Thank you for assisting in returning the medals of John Patrick Moloney, VX54091 to his family.
I purchased them on Sunday 28th August 2016 at the Chiltern VIC, Antique Fair.
On seeing them in the display case I knew that they had to be returned to the rightful owners.
I believe I got a message from an 'old digger' that this was what he wanted and it was my privilege and pleasure to ensure that his wish came to fruition.
I was also privileged when I looked up his service record and read his service to Australia in both the Middle East and New Guinea.
His service record has him attached to the 2/7th and he saw service in the Middle East and later in New Guinea.
I believe he would have had medals also for the Middle East Campaign, however only the one set were on display.
I will make inquiries with the Antique Firm to see if they can supply the history on how the medals came into their possession and I will pass this onto his relatives, as well as sending them a Photostat copy of his service record.
Thanks
Les.

This morning I received a reply from Les to my question did he mind if I included his name in our story, his reply came as I expected:

“…..yes you have my permission, I am sure someone else will do the same.
I spoke to Kathleen last night and will post the medals by certified post to her later today.
Hearing her story as a legatee and of her dad and mums service, and the service she herself has done for the county showed me that the medals are going home where they belong.
I sent her a letter also and a few lines from that wonderful song 'Spring 1919'
It was my pleasure and I know that it would have been a long haul to locate Kathleen without your help”.
Les

Les welcome to that select group of people that Glyn and I have had the privilege of working with over the years. People, who have seen medals, sometimes often left as ‘junk’, and listened as you did and thought “they deserve better” and have acted. I am proud to have been able to help.
For those of you who follow our Blog, you will have noticed that John’s Africa Star is missing from his medal bar. In the next few weeks it will be one of my duties to help Kathleen find out if her father ever received that medal, and if not then apply for it.

The returned medal tally is now 1908. 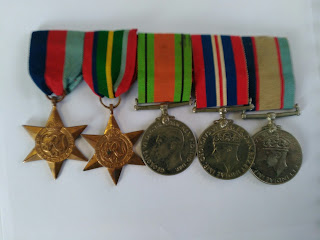 Posted by Lost Medals Australia at 21:21 No comments: