After the last return took almost a decade, at 18 hours this one is remarkable quick. The Victory Medal awarded to 3041 Acting Lance Corporal John William Stanley Speers, 30th Battalion AIF, was sent to me by Patricia F from Sydney. Patricia found the medal in the effects of her late father. How it came in to his possession is unknown but understanding more about John's (know as Jack) life it wouldn't surprise me if he sold his medals during the Depression.
After Patricia first contacted me I did some initial research based on information in his service record. When the medal arrived yesterday Patrica included some research she had done and this confirmed what I had found.
On Trove there are multiple articles about arrest warrants being issued for Jack having failed to support his wife and their subsequent divorce in 1913. The divorce story mentions 'children' which were his daughters. His service record states that Jack was a widower which I'm not sure is completely accurate, it also names his daughter Beryl as his NOK. Jack died in 1938.
Beryl married Percy Medway in 1926. They live on Percy's family grazing property near Gunning and had a daughter, Shirley.
Shirley married Bruce Mould and they lived in Cowra. Having found Bruce's death notice from 2017 it was easy to locate his son Peter. I called Peter yesterday evening and left a message which he responded to today.
I read in Jack's service record that he received a gun shot wound to the face and was later deemed to old for active service. The pre-war court reports of 'habitual drunkenness' combined with effects of his service must have made for a difficult life.
Jack's brother Alfred had served in the Boer War as part of the second Western Australian contingent. I found several stories about him, mostly negative ones which were post war but the story below is a little more interesting that most of the others.
How the medal eventually found its way in to the possession of Patricia's father will likely never been known but it will soon be returned.
The returned medal tally is now 2310.

Posted by Lost Medals Australia at 15:06 2 comments: Links to this post

The stories that I post about the unusually quick returns we do are well outnumbered by those cases that take years. This search commenced in 2010 when I was sent the British War Medal awarded to 1946 Driver Thomas Brown 10th Light Horse Regiment (later 4 Divisional Artillery Column) by the WA RSL. I have revisited it on four occasions and each time an extra clue has emerged but never enough information to finalise the search. A recent trip to Perth provided the opportunity to confirm some facts about Thomas Brown but more about that later.
From Thomas' service record it was easy to establish that he was born in Scotland and his NOK as his sister Margaret. I also had his 1916 residential address in the Perth suburb of Mt Hawthorne. However, his name was so common that without a middle name I got no where.
The first time I revisited this search I had just subscribed to Ancestry but the only advance I could make was to confirm the 1916 address from the electoral roll.
For the second revisit (2013) I focused on Thomas' sister Mary and found a family in the 1901 Scottish census that seemed to fit who I was looking for. The family consisted of father John (50), mother Margaret (40), Thomas (12, born in 1889 which aligns with the service record), sister Margaret (9) and brother James (5). However, still not having a middle name meant I couldn't narrow down exactly which Thomas I was looking for.
The third revisit (2016) was the one that provided the first real breakthrough. By trying multiple search variables in Trove I stumbled across this engagement notice.

This isn't conclusive proof that this 'T C Brown' was the one I was looking for but the mention of 10th Light Horse made it worth following up. I found the BDM marriage entry for a Thomas Charles Brown to May Elizabeth Russell and these names were confirmed in the electoral rolls. Just when I thought I had a clear way forward I hit a speed hump. The Karrakatta Cemetery records showed that May was buried in the same plot as Thomas Campbell Brown. Going back to the electoral rolls showed that from the 1930s he did use Campbell as a middle name. Still not 100% proof but worth a revisit in 2019.
The forth revisit opened up most of the story for me. I found a birth notice for Thomas and May's son Thomas Russell Brown.

Thomas Russell Brown served in WWII and using the electoral roll I established that he and his wife Nancy had two daughters Janine and Suzanne. Back on the Karrakatta Cemetery search site I found Thomas Russell and Nancy's burial plot site. While I thought I had the right family I still wasn't completely sure.
On a recent trip to Perth and tacked on as a side trip to a traditional family visit to Karrakatta Cemetery, Gail and I searched out the Brown plots. Firstly, we located Thomas Russell and Nancy's plot which confirmed their daughter's names. As can be seen in the picture the grave is in a neat, well manicured area. 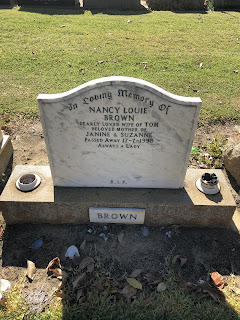 Gail and I then trekked across the width of the cemetery to the Methodist section. The condition of this section was a real shock to us and I was concerned that there wouldn't be a readable headstone. I really wasn't expecting what I found next.
To my very pleasant surprise the grave I was looking for was marked with the proof I also needed. The name and regimental number all matched up. 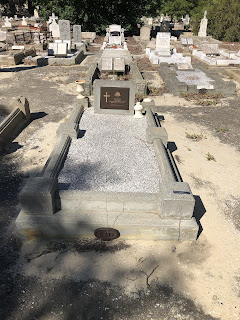 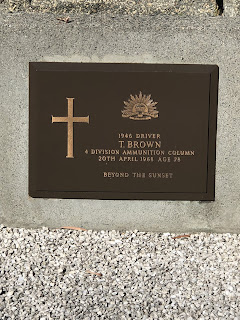 Even though I had confirmed all the facts I didn't have any leads on Janine or Suzanne. Not knowing if they had married and what their surnames might now be was going to be difficult to find.
While having coffee at Gail and Frank's breakfast bench I was flicking through the previous weeks editions of the Western Australian news paper. In the Monday edition I came across the 'Can You Help?' column which I have used in the past but forgotten completely about. I fired off an email to Jenny who for many years has edited this column.
My request to locate either Janine or Suzanne was published two Monday's ago but I didn't get any leads from it. That was until today when I received a call from Janine. A friend of hers had seen my story and passed on my contact details. I had a great discussion with Janine who remembers her grandfather really well.
Thomas' BWM has had a difficult life. The photos show the damage that has occurred to suspender and rim. I really don't think this matters as I can tell that Janine is very excited to to be getting this back in to her family.
Thanks to the WA RSL and also Jenny from 'Can You Help?'.
The returned medal tally in now 2309. 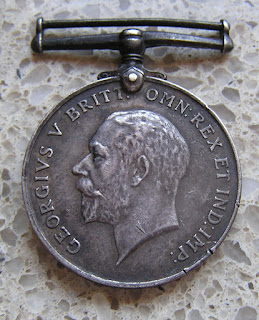 Posted by Lost Medals Australia at 22:00 No comments: Links to this post

Bill and I get considerable satisfaction when we assist other organisations that also serve our community. In this case I assisted Victorian Police Sergeant Mark P searching for the owner of an Defence Long Service Medal. Mark is a former ARA soldier and currently an Army Reservist.
Mark provided the details on the medal that was awarded to former sailor P Smith.
The very common name combined with an old service number put a few barriers in my way. I was assisted by one of my contacts, Jason, who was able to provide Mr Smith's full name. This still didn't narrow down the exact individual for Mark so I had to stretch my skills to find Mr Smith's date of birth. That was the final piece of information that Mark needed and he was soon in contact with Mr Smith.
It turns out that the medal was stolen in a burglary in Mulwala between 2 or 3 years ago and it is now back with Mr Smith.
The returned medal tally is now 2308.


Posted by Lost Medals Australia at 19:55 No comments: Links to this post

This is a story although brief in its telling, serves as a reminder to all. When you are clearing out all old family clothes and the odd box of junk,  get two people to check what is being thrown out. One after the other and that you take a few minutes to check pockets.
But for the eagle eye and the action of Helen and the team at the Salvation Army Shop in Watsonia, Herbert Keith Parkin’s medals may well have joined the long list of missing medals.
That really is the story of the return of Herbert’s medals to his family. With both his children having passed on it was left for his daughter in law, Kirstin to receive the medals. Medals that will be held in trust for Herbert’s great grandchildren. However, one of the first things Kirstin will be doing is to have the medals mounted, so that there is less chance of them being overlooked again.
The returned medal tally is now 2307. 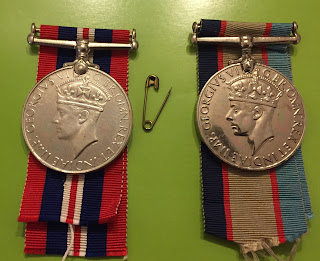 Posted by Lost Medals Australia at 16:01 No comments: Links to this post