This is an interesting item that is probably just one example of the different types of souvenirs bought home by soldiers from WWI. This is a 1914 20 Kurus coin from Turkey which has been turned in to an identity disc. The soldier is 16953 Royce Richard Fletcher Fiddes who served in the 5th Light Horse Field Ambulance and later the Australian Camel Brigade Ambulance.
I thought that with a name as distinctive as his that tracing his family would be reasonably easy. This wasn't the case and it has been close to four years since this search started. It was only resolved when a descendant of Roy's came across an online post about our research.
Thanks to Ken Duncan who originally sent me the coin. 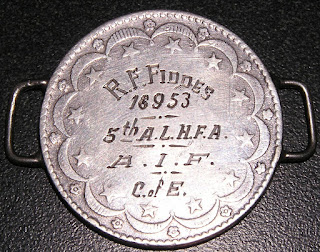 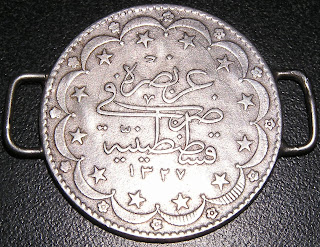 These medals are well traveled and are about to head overseas again. The WWI trio awarded to L-13790 Phillip John Pratley and WWII medals awarded to N465580 Joseph Pratley were sent to me from Rita of the Australian High Commission in London. The medals had been handed in based on the WWII medals having been awarded to an Australian solider.
It was easy to work out who Joseph was and that Phillip served in the Royal Fusiliers. Everything after that was a lot more difficult.
Joseph was the son of Charles and Mary Pratley who lived in Goulburn, NSW. After enlisting he served in Bougainville but accidentally drowned. A picture of his head stone is at this link. Mary died in 1944 and Charles in 1950. Working backward I found that they emigrated to Australia in 1922. But who was Phillip?
Eventually it became apparent that Charles was Phillip's brother and as there were no other family in Australia is was reasonable to assume that Joseph's medals were sent to the family back in England. After several months of wading through the UK census, birth and marriage records I determined the names of Phillip's wife, his daughters and their husbands. All the clues pointed to this family living in Plymouth. I ran in to a bit of a brick wall and thought the best strategy to locate the current generation was by putting a letter to the editor in the local paper. This was turned in to an article which was published online at this link. Not long after publication I received an email from Phillip's grandson. I'll send the medals to him shortly.
Thanks to Rita at the High Comm and Neil at the Plymouth Herald.
The returned medal tally is now 1777. 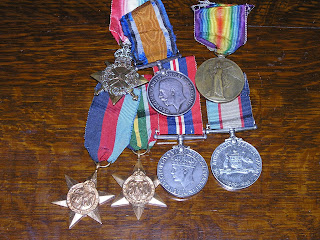 This is another occasion where there isn't a lot to tell. The following short story is from Bill:

As I sat down to write the story of the return of George’s medals and his grandfather’s 1914-1915 Star, I found myself in a quandary in that both Raelene, who had found the medals and Ray’s family requested anonymity. Their reticence being based partly on family matters and partly on not wishing to advertise that they now had some their grandfather’s and their father's medals back. Accordingly Glyn and I decided to follow the path we have in the past. Other than my privately saying “well done” to Raelene. This is where the story of the return must end.

The returned medal tally is now 1770.

This last weekend I was linked to a Facebook post about a lost Defence Force Service Medal. The post included the service number, initials and name that were stamped on the reverse. From this, and with the help of my colleague David Cadden, I worked out the medal was awarded to Martin Edward Price.
The only additional information we could find was the name of his sister. This led back to Facebook and I could work out the names of other family members. I used this to contact one relative by phone and leave another a Facebook message. One of these got through and I spoke to Martin tonight. His medal should be on it's way home, having been lost in 1989, in the near future.
Thanks to Michael Bear Harry who found the medal, my friend Susan and Ian who shared the post with me and David for the database search expertise.
The returned medal tally is now 1767. 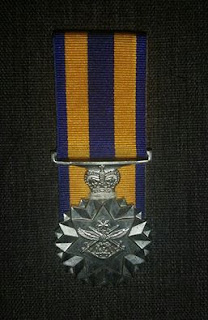 I received the Vietnam Medal awarded to 61987 Michael Wayne Ayers from a friend of mine, Graham Docksey. The medal arrived in July 2014 and I spent a lot of time following Michael and his wife Jane from address to address and job to job around Albury, NSW. I eventually ended up leaving a message with a friend of theirs but never received a reply.
This evening I decided to have another look at this case and the first thing I found was Michael's death notice from July 2015. While I was upset not to have located Michael before he died, the death notice gave me his brother's name, Barry. To my surprise Barry lives in Canberra and I'll be arranging to returning the medal to him, hopefully in person, in the near future.
The returned medal tally is now 1766. 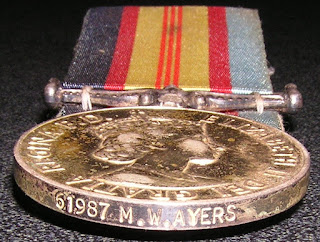 I recently received an email from a West Australian Police Officer who had come across the medals of 1836 PTE George Edward Charles Fisher. George was a member of 38th Battalion AIF and wounded in action a couple of times.
Following WWI, George returned to his trade of Motor Driver. It was pretty easy to follow him through the electoral rolls until he died in 1948. George didn't marry so I had to follow his siblings. Of his three brothers, one died as a baby, another died in 1935, sad,ly I found that his wife died in 1930, the same year they married.
The third brother, Albert married and had children. I followed this line until 1980 when the online electoral roll stop. Using the fairly common name of Fisher, the initials of a husband and wife and a town I knew the family lived in, I made some educated guesses and provided the phone number of a possible relative.
My Police contact rang the number and later reported to me that the contact I provided put him in touch with a sibling, then a cousin, then a nephew who was able to explain why the medals were not in the families possession. The short story is that the British War Medal and the Victory Medal awarded to George will soon be returned to his family.
The returned medal tally is now 1765. 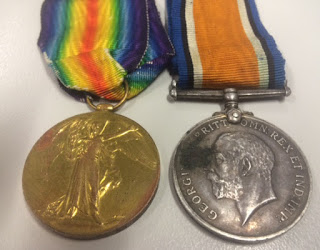