This set of medals are named to Walter Henry Allen Jones, however, the number, SX18489 brings up the record of Robert Allen Jones. There are some similarities here and as it turned out it is the same person. The best news of all is that Walter, who enlisted under the name of Robert, is still alive. 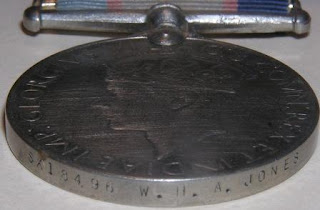 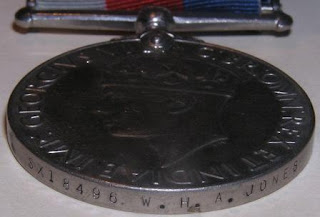 The returned medal tally is now 587.
Posted by Lost Medals Australia at 20:13 No comments:

I recently received the WWI trio awarded to 2561 Stanley Vernon Botting. He was a little difficult to locate on the National Archives as he transferred from 27th Bn to Australian Army Pay Corps so an 'A' was added to his number as was the procedure at the time. His rank also confused me a little as the impressing on the BWM and Victory medals is shows CPL-ER-2. I've not come across this before and will have to do a bit more research to work it out.
Before WWI, Botting worked in the South Australian Electoral Office. It was the history of this office that gave me the best lead. I contacted the author of the paper 'history of the state electoral office', Margaret Macilwain, who provided me with the contact details of Botting's grand daughter. A picture of Botting can be found on page 26.
So, thanks to Margaret, this trio is now on the way back to the family. 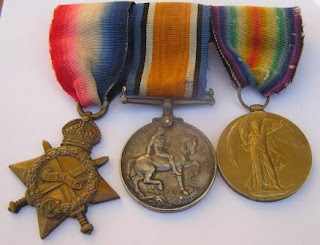 Yes the BWM is the wrong way around but this is how it was sent to me. 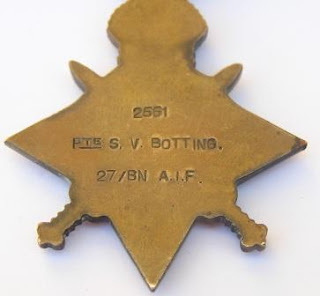 The returned medal tally is now 583.
Posted by Lost Medals Australia at 17:59 No comments:

A little over two years ago I was contacted by Alan Kitchen from the Family and Friends of the First AIF Inc who had obtained the Victory medal of 4520 Teddy Arthur McLean 3rd Bn AIF. McLean died of wounds on 4 Mar 17.
Alan was keen to see this medal returned to the family for the following reasons:
Bill , assisted by the Yuku team, did some extraordinary detective work which led to locating McLean's great nephew, David. When Bill spoke to David it turned out that he had all the other items that are associated with a WWI soldier who died of wounds. He has Teddy's memorial plaque and scroll. A photo of the scroll is below. David also has all the letters that Teddy's brother sent home. David has also provide us with a photo of Teddy. 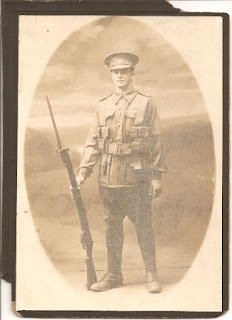 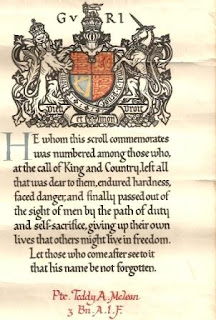 The returned medal tally is now 580.
The family of Teddy McLean also had his memorial plaque so now all the items have been reunited. (Added 6 Feb 10). 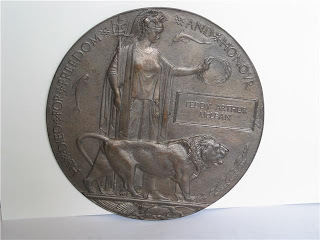 Posted by Lost Medals Australia at 17:12 No comments:

Light Horse Medal to be returned

I have previously posted the details and medal photos of the BWM awarded to 2894 DVR John Walter Fell of the 2nd Light Horse Sig Tp. His service record indicates that he was wounded and spent a bit of time in hospital for a couple of aliments. The search for his family has been difficult due to a broad use of the names John and Walter by the family and fewer children than we would have expected from an originally large family. 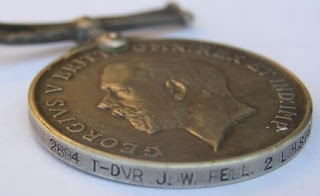 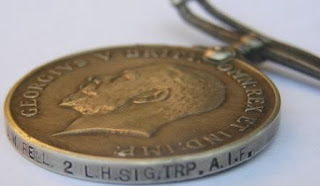 The returned medal tally is now 579.
Posted by Lost Medals Australia at 17:43 No comments:

This search was a little confusing at first. Even though the medal is impressed with the number 1194, Archibald George Williams service record is under the number 2194, although 1194 is struck out. Williams had an eventful war. He was wounded a couple of time and was charged for several offences. His service record shows that he lost is original medals and obtained a duplicate set. The medal I have is one of his original trio. 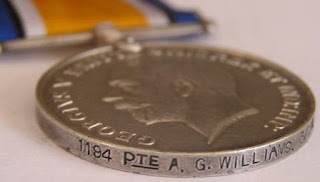 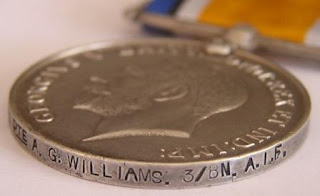 The medals returned tally is now 578.
Posted by Lost Medals Australia at 17:45 No comments:

This medal was found in the mid 70s when it was picked up while the finder was mowing his parents front lawn. It was awarded to 2349 PTE John Edward McCarthy who served with 22nd Bn AIF. McCarthy was wounded in 1916 which resulted to him being returned to Australia and discharged in 1917.

The retunred medal tally is now 577.
Posted by Lost Medals Australia at 17:33 No comments:

This medal is a WWII Pacific Star awarded to WFX34622 Ruth Margaret Veitch. Ruth saw service in Madang where she was a nurse in the 102 Casualty Clearing Station. She would have been entitled to at least four more medals but where they are is a mystery. 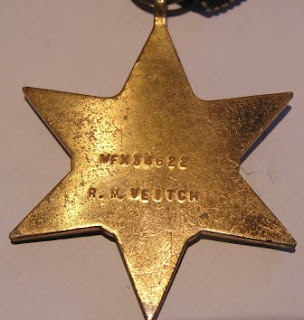 This search was a relatively easy one. I received the medal earlier this week and my initial search indicated that Ruth was originally from a small farming community in WA. The white pages showed that there was only a few people with the same surname in that area so I took a punt and my first call I made was to Ruth's nephew. Total research time was about 10 minutes. Bill and I only wish they were all this easy.
The medals returned tally is now 576.
Posted by Lost Medals Australia at 10:36 3 comments:

914 Albert James Roberts was a member of 24th Bn AIF who fought at the Battle of Fromelles in August 1916. He was initially reported as missing and then KIA following a court of inquiry. He has no know grave and is listed on this website.

The Battle of Fromelles has received considerable attention recently with the discovery of an unmarked burial site at Pheasant Wood near Fromelles containing 250 Australian soldiers. The ADF is currently managing a project to re-inter the remains of these soldiers in a proper war graves cemetery. My friends Tim L and Sandra P are also heavily involved in this project, this is their website.
This return is not a medal but the memorial plaque that was presented to families who lost during WWI. 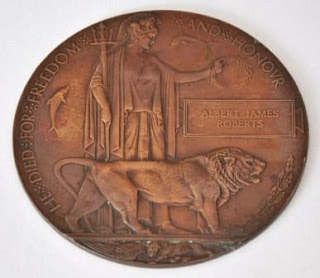 The medal returned tally is now 575.
Posted by Lost Medals Australia at 21:23 No comments:

VX21251 James Leigh Russell was the son of a prominent early 20th century Melbourne family. Percy Joseph Russell was a solicitor and land owner who served as the Mayor of Hawthorn on several occasions. The legal practice is still running today under the name of Russell Kennedy Pty Ltd.
Although married twice, James had no children of his own so the search was on for a close relative. With help from the great Yuku team Bill has been in contact with a great niece James and the medals will be sent home in the very near future.
I've had these medals for 12 months after they were sent to the Directorate of Honours and Awards and then forwarded to me. This is a great example of the relationship I have with this organisation.

The medal returned tally is now 574.
Posted by Lost Medals Australia at 19:55 No comments:

Over the last few days we have been updating a lot of items associated with Lost Medals Australia. Most notably has been the update of the web site by Scott. The list of medals we are trying to be returned can be found here and is correct as at 1 Jan 2010. Also we have added several new photos and some new links that we find useful with research.
I hope you enjoy these updates.
Posted by Lost Medals Australia at 16:18 No comments: