The post about James Hubert Scott has been updated.

This return isn't a medal but one of those other military items the comes our way every now and again. This WWII Record of Service Book was sent to be by my friend Sandra. It was issued to VX144717 Harold Mervyn Thomson.
With in two minutes of opening the parcel which contained the book, I had found a family tree listing for Harold which provided me his daughter's name. 5 minutes later I was talking to her and making arrangements to send this book back to the family. 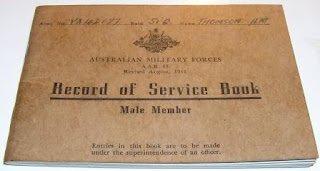 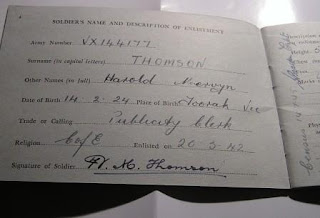 This is another story of a soldier wanting to see the medals of a veteran returned to the family. Major Neil L is a member of the Army Reserve and has been searching for the family of VX85660 Wilfred Albert Clayton so that Wilfred's medals can be returned. Neil did a power of work but this is a very complicated story.
Bill has found Wilfred's nephew, the son of Wilfred's sister Valma Grace Clayton. Despite three marriages Wilfred did not have any children of his own. Sadly, Wilfred died in a car accident when returning homes from visiting his nephew. It is believed he may have had a heart attack at the wheel. We surmise that the nephew was the son that Wilfred never had. They spent a lot of time together usually fishing.
Great research from Bill and a wonderful gesture from Neil.
The returned medal tally is now 971.

This is a complicated story so hopefully I can do it justice.
4807 David George Irvin  was a member of the 54th Battalion AIF. The AWM entry says the following about the action this battalion was involved in on 19-20 July 1916:

Moving to France in June 1916, the 54th fought its first major battle on the Western Front at Fromelles, on 19 July. It was a disaster. The 54th was part of the initial assault and suffered casualties equivalent to 65 per cent of its fighting strength. Casualty rates among the rest of the 5th Division were similarly high, but despite these losses it continued to man the front in the Fromelles sector for a further two months.
This battalion has probably become better know today after the discover of a mass unmarked grave at Fromelles. This website provides more details. The Australian Army has gone to great lengths to identify the soldiers buried in the grave and re-inter the remains of these soldiers in a proper war graves cemetery. My friends Tim L and Sandra P are also heavily involved in this project, this is their website.
Irvin is one of the soldiers whose remains have been identified through DNA testing. This link provides the details of the soldiers who have been identified. This link is to the ABC story about the identification of Irvin and this link has a picture and more details about Irvin.
So how did Lost Medals Australia get involved?
The memorial plaque presented to the family of Irvin after WWI recently came up for sale on ebay. A very vigilant Canberra local and now Lost Medals Australia researcher, Tim D, realised who Irvin was and the significance of the plaque. He won the auction and has asked Lost Medals Australia to coordinate the return to Irvin's family who we have also been in touch with.
It is early days yet but I'm hopeful we can arrange for this plaque to be represented to the Irvin family at the upcoming Chief of Army's History Conference.
Well done to Tim for his wonderful gesture to an Australian soldier.
These pictures are of David Irvin and the plaque. 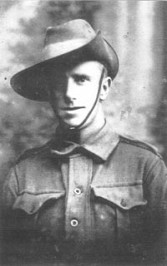 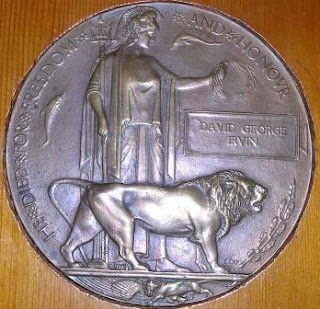 3439 CPL Harold Woodlands served with 1st Pioneer Battalion and was killed in action on 27 April 1918. He is buried at Le Peuplier Military Cemetery.
Harold's British War Medal was sent to me by Gareth who is the secretary of the Australian Society of WW1 Aero Historians. This society also sent me the Benar medals. At first I kept hitting brick walls. The Benar search motivated me to revisit my research on this soldier and I came across a family tree which included Harold. I contacted the tree owner who kindly did some more research and put me in contact with Harold's great nephew, John.
Thank you to Gareth for sending me the medal and thank you to Anissa D for connecting me with John.
The medal returned tally is now 967.

Today I met with John and his family and returned the medal to him. 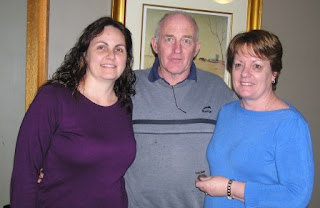 Some searches are very easy and some have proved to be very difficult. This one falls in to the very very easy category.
Today I received the British War Medal awarded to 4712 James Hubert Scott who served in 16th Battalion AIF.  3 minutes after opening the package containing the medal, thanks to the Internet, I was able to identify who was James' grandson and I found his phone number in the White Pages. I've spoken to the family and will be arranging for the medal to be returned in the near future.

Update 16 Aug 10 - Today I spoke to Mrs Catherine Hindson who is James' grand daughter. As can be imagined, Catherine is rather excited about this and I'll be arranging to return the medal to the family very soon. Catherine is the wife of William (Bill) Hindson MC MG.


Thanks to Tarren for sending this medal to me.
The medal returned tally is now 966.
This medal has had a pretty hard life as the pictures show. The impressing was difficult to read let alone photograph. 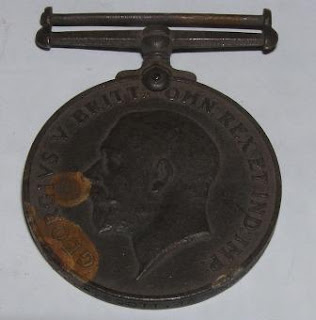 Update 28 Aug 10
This morning I was lucky enough to meet with members of the Scott family and return this medal to them.
Pictured from left are:
Catherine Hindson (nee Scott) who is James', grand daughter
Bill Hindson
Don Scott - James' son
Me
Elsie Scott - Don's wife
James' medal is in front of Don. 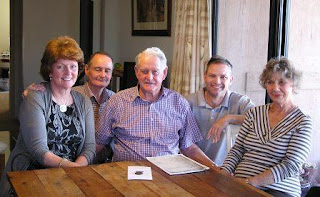 For several years the Australian Society of WW1 Aero Historians website has had a link to my main web site and I have reciprocated with a link from my blog. Air Commodore Mark Lax OAM, CSC is the President of this society and I've know him for many years. A chance meeting with Mark has allowed me to pay back the Australian Society of WW1 Aero Historians for their support.
For some time the Society has had the WWI pair of medals awarded to 322 CPL John Benar. Finding John's details proved easy, as did finding his siblings. Then the trail ran very cold.
John had a sister Johanna who died at birth in 1886, another sister Lucy (died 1905), a brother Laurence (died 1938) and another sister Doris. Both Laurence and Doris married but neither had children.
John married Muriel Roberts in 1920. He married a second time to Pearl Barraclough in 1949. Pearl was a widow who had two sons. John had no children of his own.
My search kept running in to brick walls. Of all the Benar family, none had any children so there was no nieces or nephews to look for. I then stumbled on a family tree which gave the names of Pearl's sons and from this I could work out who her grand children were.
I've just spoken to one of Pearl's grand sons who remembers John and has agreed to become the custodian of his medals.
The returned medal tally is now 965.

This search was initially a bit confusing as there were two soldiers with the name Christopher Gray and both with the same regimental number who served in the AIF. One was in the Australian Light Horse the other in the Infantry. This particular search was for 143 PTE Christopher Gray who served in 15th Battalion.
Well done to Alex for locating PTE Gray's grandson.
The returned medal tally is now 963. 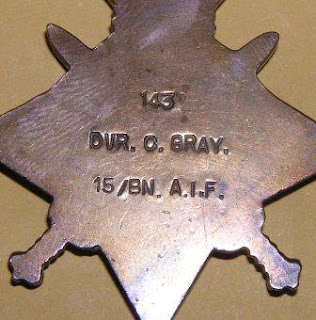 Bill has just completed a wonderful piece of research that has seen 11 medals returned to the family of four soldiers, all related. This is the story of the research:
While working for Legacy, Kel Gulliver was given a box of medals and other miscellaneous items. It was believed the box may have belonged to a Legacy Widow. Unfortunately, there were no records with the items that identified her.
Recently Kel, now retired and having exhausted all other avenues, placed an item in the Veteran Affairs newsletter. At that same time Bill was researching another matter also listed in the same news letter so he contacted Kel to and volunteered our services.
The box in Kel's possession contained four sets of medals:
-one WW1 set awarded to David McLean, who tragically died on a troopship whilst returning to Australia,
-the second set from WW2 awarded to his son, David H.C. McLean,
-a third set from WW1 awarded to Frank William Gibson,
-and finally another WWI group to Frank's brother, Percival Thomas Gibson which included Percival's Death Plaque.
Along with all these medals was a letter that the Ships Chaplain wrote to David McLean's widow, a WW1 Returned From Active Service badge, a Widow's and a female relatives badges and school children's Peace Medalet.
It was while tracking the two families that Bill realised they were linked, David H.C. McLean and Frank had married sisters, Amy and Alice. The two couples went their separate ways and neither had any children.
One of the principles we follow is to always try to keep family medals together, thus the obvious choice now was to search for the next of kin of their brother Alfred, one of whose sons was killed in Malaya in 1942, while another, Henry, was a POW on the Burma Thai railway.
From all this Bill tracked down Alfred's grand daughter Kaye and has since rung Kel to give him the news and connect him with Kaye.
When Stan Savige sat down with other WW1 Veterans and formed Legacy to look after the widows and children of deceased servicemen and woman, we would I like to think he had people like Kel Gulliver in mind.
The full collection included:
David McLean WW1 Medals - QSA, 1914-15 Star, BWM and Victory Medal.
DHC McLean  WWII Medals - ASM 1939-1945, 39-45 War Medal, and a LSGCM.
Frank Gibson WW1 Medals - BWM and Victory.
Percival Gibson WW1 Medals - BWM and Victory, also his death plaque (pictured).
1 School children's Medalet.
Returned From Active service badge.
Female relatives badge.
Widow's Badge.
The returned medal tally is now 962. 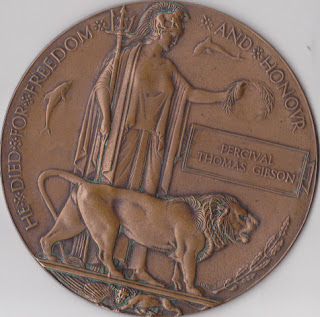 NX128393 Henry Thomas Jasprizza WWII War Medal is another that came to me from the NSW RSL. Bill has located Henry's son and the medal will be returned in the near future.
The medal returned tally is now 950. 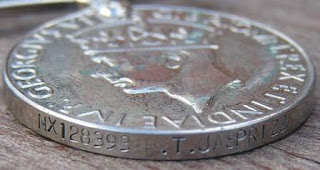 The naming on this medal shows heavy impressing on the 'T' and light on the 'H and' 'A'.
Posted by Lost Medals Australia at 10:14 1 comment: