The story of the return of two WWII medals to the family of Joseph Zaltzman was posted here on 30 September. As I corresponded with the family they kindly provided me with a couple of photos of Joseph, one of which I posted. I felt a special link by seeing what Joseph looked like.
After our email contact, I sent Joseph's medals to his nephew in Israel and they have arrived safely. I received a great email today that talks about the reaction of the family and I thought I would share just a small part of it to show what receiving these medals back means to the family:

"I told it to my Mom, ...., she is lighting candles once a week for each of the family who passed away, on Monday the day the medals arrived she lighted a candle to his memory, Joseph left Israel at 1937, she was 9 at that time, they were very close at that time, the second time she saw him was around 1960, 23 years after that – she was 32, a big gap to abridge."
Posted by Lost Medals Australia at 12:48 No comments:

I often receive one medal from a group, in this case the 1939-45 Star awarded to VX57411 John Driver. A single medal and the condition it is in often makes me wonder where the others are and what it has been through. In this case I now know Driver's medals were stolen in 1980, where it has been since then and where the rest of the group are is a mystery.
The returned medal tally is now 561. 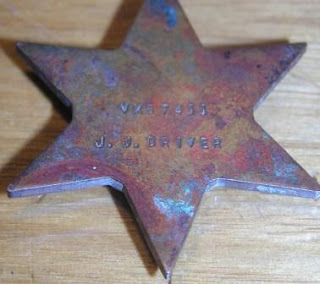 Posted by Lost Medals Australia at 19:52 No comments:

The WWI trio awarded to 3533 PTE James Henry Douglas Wigginton came to me from an unusual source. They were found in a military barracks in Tasmania, they have been court mounted for display in recent years. The concerned Army officer who found them had no idea where they came from so contacted me. Wigginton came from Sydney, however, there is a letter on his service record from a Millie Wigginton, dated 1950, saying that she has moved to Tasmania for health reasons. She also write that James was killed in a work place accident at the Commonwealth Bank in Martin Place Sydney. Millie says that all she has is his medals and this explains how they came to be in Tasmania.
Wigginton had a hard time during his service. As can be seen in his service record he spent a lot of time in hospital for appendicitis, septic foot, shell shock and VD. He was also court martialed for being AWOL and sentenced to 6 months detention.
Medals returned tally is now 560. 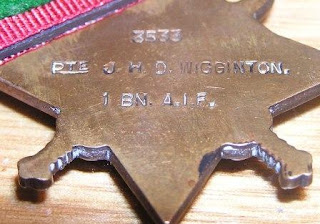 I've had the WWII medals and dog tags belonging to NX109001 Peter O'Halloran for several years. They were sent to my after being found in a WA tip. Bill has been chipping away and a post on our favorite family research web site drew an almost immediate reply from a member who knows the family. I'm sure there is more to this story and I'll post it when I have all the details.
Medal returned tally is now 557. 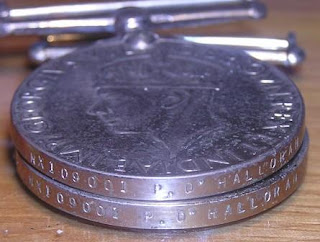 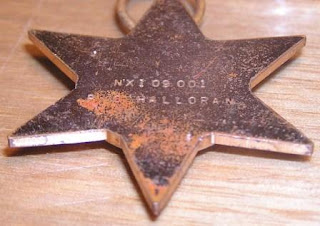 Posted by Lost Medals Australia at 21:27 No comments: