I have just updated the post on Arthur Walters by posting a picture of his name from the Australian War Memorial Roll of Honour.
Posted by Lost Medals Australia at 20:35 No comments:

I don't mind saying that my friend Sandra really tested my research skills when she sent me two WWII medals awarded to Albert Edward Holton Carrell. Albert served in the RAAF.

Using the electoral rolls and birth, deaths and marriage records available on line I worked out that Albert married in the 1920s but was divorced by the 1930s and didn't have any children. He lived out his life with his two spinster sisters. Sadly, that line of the Carrell family is extinct. So I had to go back to Albert's parents and grand parents.
The only firm piece of evidence I had was the quite unusual 'Holton' name. Using the British census records I found Frances Ann Holton was born in Westerton, Sussex in 1834. She married Elias Carrell. Their son was William Thomas Carrell who married Elizabeth Hoare. They had three children, Ellen Frances, Elizabeth and Albert. I also looked at the Hoare family but they are extinct as well.
This led me back further to Frances Ann Holton and that is when I came across an Ancestry family tree. I contacted the tree owner who is the great great grand daughter of Frances making Albert her great uncle.

Another medal that came to me following the ACA story was The Defence Medal awarded to VX134588 William John Ford. There was very little in the online records about William, but I did find him on an Ancestry family tree. I sent a message off to the tree owner and soon received a reply telling me that she was the wife of William's nephew.
I'll send the medal to the family next week for William's great nephew to have with him for next years Anzac Day service.
Thanks to Des T who sent me the medal.The returned medal tally is now 1278.

Sometimes I find that research ebbs and flows as does the type of item that I return. For a while I had a purple patch of returning badges and medallions. This week it is dog tags. On Tuesday I received dog tags issued to two servicemen from Nick of Victory Badges.
The first one I looked at was issued to PA2414 Robert Leslie Bott. The PA prefix of the service number told me that Robert was a sailor and that his home port was Port Adelaide. South Australia is the worst state to conduct a record search of but I soon found via the electoral rolls that Robert spent the years after the war in NSW. Indeed, he and his wife settled in a large rural town. On a hunch I had a look at the white pages and there was a person listed with the same name and initials as Robert's wife. I cold called the number and it was the lady I was looking for. Also at the house were Robert's daughters and they listened to my explanation on speaker phone.
From start to finish this search took about 10 minutes (sorry Bill). I'm well down the track of narrowing the search for the family of the second dog tag that Nick sent. On top of that I've received a request from France to track the family of a WWI digger whose dog tag has been found at an old battle field site. I wont say anything more now but I hope that this will end up being a great story. 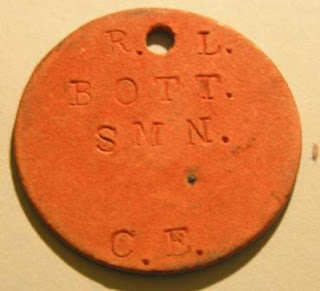 Another medal that came to me as a result of the ACA story was the Victory Medal awarded to 269 Allan Hamilton who served in the 13th Light Horse Regiment. He later transferred to the 13th Field Artillery Brigade. Even though his records doesn't reflect this, it is highly likely that Allan participated in the battles at Lone Pine. (For accessing service records please refer to this tutorial). Allan died in 1949.
I had to revisit this research but I've now located Allan's great niece, Loretta, and will send the medal to her shortly.

Thanks to Peter H who sent me the medal and to Betty Harrison who helped me contact Loretta. The returned medal tally is now 1277.

I received the Australian Active Service Medal that is pictured  from the WA RSL. The medal has the clasp Iraq 2001 but there is no Iraq Campaign Medal. However, there is a clasp missing which must be for East Timor as the other ribbon is the UNTAET medal. Also on this ribbon is the insignia for a Meritorious Unit Citation. The MUC was awarded to four units for service in East Timor and I was fortunate enough to be in one of them as well.
I spoke to the recipient today and I hope met him in the near future and hand the medal over personally.
The returned medal tally is now 1276. 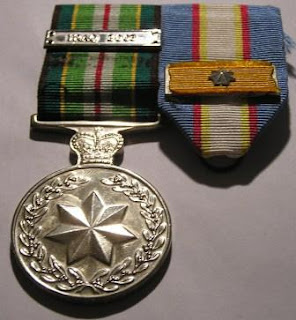 23516 Norman Charles Cranston served in the RAN for a total of 12 years including 6 years of war service. He is currently living in Rockhampton, however, I'll very soon be sending the medals to his daughter. Thanks to Lynn S who sent me the medals after seeing the ACA story. Thanks also to Rodney and Debbie who assisted me locating Norman's immediate family.
The returned medal tally is now 1275. 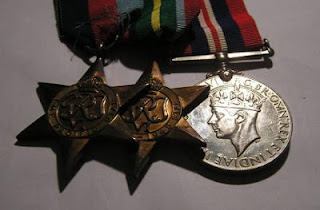 For those who take an interest in naming styles note the difference between RAN and Army naming.
Posted by Lost Medals Australia at 19:18 2 comments:

I've just updated the post for Ernest David Davies and added a photo of his son getting the medals back.
Posted by Lost Medals Australia at 20:51 No comments:


Finding the family of Arthur Walters has proved quite difficult. It took me several days to find the one key piece of information that I needed to make the story unfolded.
3294 Arthur Leslie Walters was a 20 year old from South Australia when he enlisted in August 1915. He was allocated to 27th Battalion, AIF.


Arthur was the son of Charles and Annie Walters who were originally from Scotland. Charles worked for many years with SA railways as a Station Master.
This is Charles’ obituary:

Mr. Charles Walters, who died at his residence, Brighton, was born at Truro, Cornwall, 80 years ago, and came to South Australia in the sailing ship Afgan in 1879.  Before leaving the old country he was employed by the Great Western and Great Northern Railway Companies of Great Britain.  Shortly after he arrived here he joined the South Australian railway service as signalman, and eventually became a first-class stationmaster.  He was in charge at Bugle Ranges (10 years), Penola, SE.(7 years), Mount Barker (10 years), and North Adelaide (11 years) making a total of 37 years as stationmaster.  He leaves a widow, one son (Mr. C. N. Walter, of Colac, Victoria), and one daughter (Mrs. E. Victor, of Perth).  Another son, Arthur, was killed in action at Mont St. Quentin. France, in 1918. There are four grandchildren.
Source: http://saobits.gravesecrets.net/w-x.html

Arthur fought in France but his service record provides considerably more detail about periods of hospitalisation for Bronchitis, Trench Foot and VD than the fighting he was involved in. Arthur was killed in action on 2 September 1918.
This photo of Arthur is sourced from http://www.ww1sa.gravesecrets.net/wa---wal.html 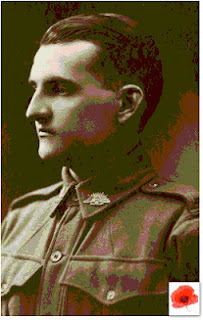 This missing person report from the Red Cross provides a first hand account of Arthur’s death. 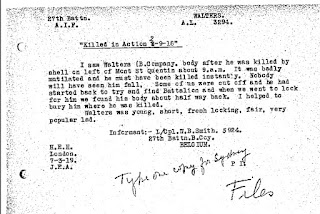 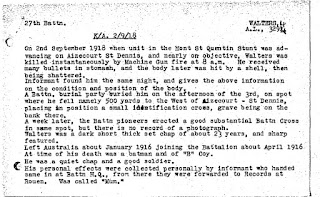 Arthur was buried where he was killed but later exhumed and reburied in the Peronne Communal Cemetery Extension.

From Charles’ obituary, I had two leads on Arthur’s siblings. A Mr C. N Walter of Colac and Mrs E Victor of Perth. Using the electoral rolls I found Charles Montague Walters in Colac and by searching back through some birth records I established that this was the son of Charles and Annie. The obituary had the initials wrong and the surname misspelt.

Charles Montague Walters was married to Olive Mayira Osbourne and they had two daughters. Charles was an hotelier and held the license for several hotels in Victoria. In 1938 Charles moved to Sydney but left his family in Melbourne. 4 months after arriving in Sydney, Charles drowned while swimming at Bondi Beach.

This is the newspaper report: 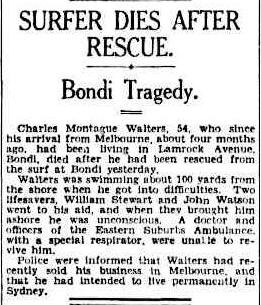 Two men who pulled Charles from the ocean were later awarded lifesaving medals: 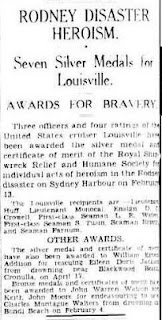 I lost track of Olive and her daughter’s in the 1940s. Charles and Olive did have a son, also named Charles, who died as an infant.
So with the Walters trail gone cold I looked at Arthur’s sister Mrs E Victor of Perth. This limited information proved impossible to determine exactly who I was looking for, as there were numerous people by this name. After several unsuccessful hours of searching I came across this death notice for Arthur:


It was in this notice that I found the key. Arthur’s sister is listed as Mrs E. E. Victor of Fitzroy. A search of the electoral rolls gave me the names Ernest Edwin and Florence Mabel Gladys Victor. A check of the Victorian marriage records provided the proof that Florence’s maiden name was Walters and the child of Charles and Annie. It didn’t take long to follow Ernest and Florence to Perth as mentioned in Charles’ obituary. Ernest died in 1935 and Florence died in 1949.
From there I quickly followed the Victor line to Florence Kathleen Victor who married Wyndham John Mitchell. Their sons are Peter and David. From the electoral rolls, I had David’s middle initial and his wife’s name. A quick check of the White Pages provided a phone number in WA. I cold called David and sure enough, I had the person I was looking for. David is Arthur’s great nephew.


Thank you very much to Lorrie M who sent me Arthur’s medal after seeing the Anzac Day story on ACA. The retuned medal tally is now 1272.

Post update 29 May 2013
The other day I visited the AWM and took a photo of Arthur's name on the Roll of Honour.

Today the final results for the Best Australian Blog Competition were published. Unfortunately, I missed out on a prize or the people's choice award. The results are at this link.
I know that many friends and readers visited my blog and voted for me, to you all I am externally grateful.
Posted by Lost Medals Australia at 18:46 No comments: