The story behind these medals is pretty hard to believe but not much surprises me these days. Having now spoken to Fred's daughter I can fill in all the gaps.
These medals are in as issued condition and still in the box of issue. Along with the medals was a letter written by Fred in 2002 addressed to Christies requesting that the medals be mounted to wear. Somehow the medals went missing in the mail, they eventually found their way to the Directorate of Honours and Awards before being sent to me.
Fred was NX30929 Frederick William George Johnson, he served in Syria and later PNG. After WWII he didn't participate in Anzac Day marches but in the early 2000s he decided to became more involved and get his medals mounted. Fred died in 2004.
It took me some time to work out Fred's family tree but today I was able to track down Fred's nephew. To my very pleasant surprise he was able to provide me with the Fred's daughter name and phone number. I was soon talking to Sandy who filled in all the blanks about Fred's medals.
Thanks again to Honours and Awards for sending these to me and to Peter for helping me get in touch with Sandy.
The returned medal tally is now 2355. 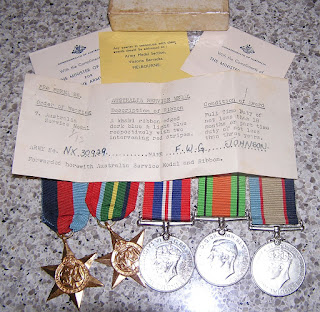 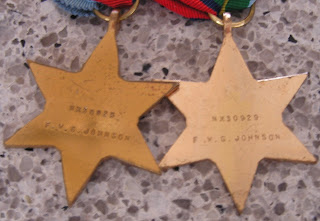 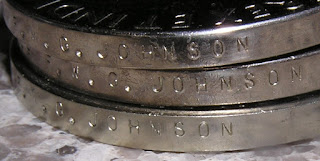 Posted by Lost Medals Australia at 16:28 No comments:

After each Anzac Day I get multiple requests about medals that have been lost or found. When a group is lost all we can do is record the details in case they come our way.
When an individual medal or group is found the information comes to me via the Police, RSL, individuals or Facebook posts. Over the last few days I've had six different requests for help after medals have been found. Three searches have proved to be rather straight forward but the details just can't be shared. All I can say is that two singles, a group of three and a group of five medals have been returned after being lost on Anzac Day 2019.
The returned medal tally is now 2350.
Posted by Lost Medals Australia at 16:08 No comments:

The incorrect spelling of a name and two regimental numbers really complicated this search.
It all started in September 2017 when I received three sets of medals from Stuart H. All three searches are now resolved.
What caused the confusion was that Walter Charles Speechly often had his surname spelt Speechley. Even on the original service record Walter has manuscript amended the spelling in his own hand and crossed out the last 'e'. This error continued all though his records and even on his medals. The naming on the 1914-15 Star is different to the BWM and Victory Medal. To top this off Walter had the regimental numbers of 1208 and 1330.
Having all three WWI medals, especially when not mounted in one group, is rather exciting. It looks like they were pinned on to a jacket with safety pins (we all know what Bill's opinion about safety pins is). Walter was at Gallipoli and was wounded in action on 22 May 1915 when he received a gun shot wound to the left thigh. He was later wounded in action a second time in August 1916. This time a gun shot wound to his right leg.
Walter was pretty difficult to follow through the records, the search had to be doubled to cover both spellings. I couldn't find any evidence of him having children so my search extended to this siblings. This lead me to an Ancestry family tree which included Walter's sister Christine. The tree owner in Walter's great nephew, Michael. He has an interesting story of his own. Michael was originally from the UK but 35 years ago moved to Connecticut, USA. His interest in his family history has uncovered several times removed grandparents buried in the same area which he never knew about prior to starting his own research. Michael's interest in this family makes him the ideal person to receive Walter's medals.
The returned medal tally is now 2340. 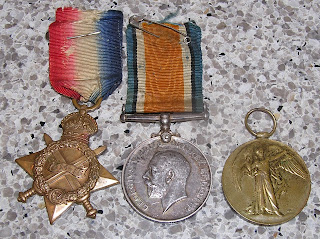 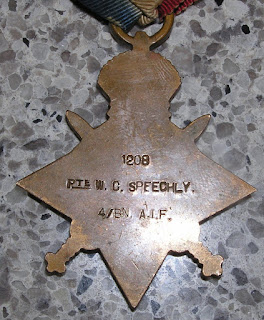 Posted by Lost Medals Australia at 13:37 No comments:

This is the last of the medals out of the Grafton Box.
2495 James Sidney Burke was 32 when he enlisted in 1915. An interesting comment on his service record is that he was born at sea. James was discharged in Nov 1916 and during his period of service was in 1st Battalion, 1st Pioneer Battalion and 53rd Battalion. James never married and it looks like he lead an itinerant labouring life. He was in trouble with the police for selling sly grog and this was reported in the newspaper. I also found James' funeral notice. Both these entries are below. 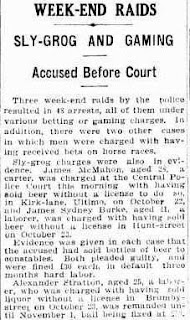 The information on James was pretty sparse so I turned to his mother, Mary. From her death notice I got the names of all James' siblings. One name was Stephanie Genevieve Hosford which was pretty easy to follow through the BDM and electoral rolls. Stephanie and her husband moved from NSW to VIC so I had to search back and forth across the different state records. From Stephanie's death notice, which named all her children, I focused on one son, Peter and soon found him in the White Pages. This morning I spoke to Peter, James' great nephew, who I will send the medal to in the near future.
The returned medal tally is now 2337. 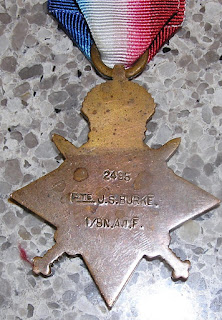 Posted by Lost Medals Australia at 11:32 No comments: 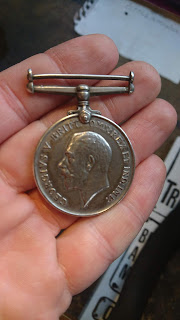