I very rarely endorse any product, cause or company as I wish to be seen as unbiased as possible. This is despite the many requests and financial inducements I receive to have the Lost Medals Australia name affiliated with a particular group or company. I try to stay aligned to those others who support veterans like the RSL.
I recently had the good fortune to met John Bale and Cavin Wilson. These are two highly motived young officers who founded Soldier On which has a focus on veterans of contemporary conflicts. The purpose and values of Soldier On are:


Purpose:
Soldier On is about Australians coming together to show their support for our physically and psychologically wounded – we will always have their backs. It’s about giving those who have served our country the dignity they deserve and the chance to do and be whatever they choose through; providing access to inspirational activities, supporting rehabilitation and providing opportunities that empower individuals.
Values:
To be strictly non-political and non-critical
To always remain ‘light’ and never be a self-serving entity
To work with the Australian Defence Force or any other agency that supports our purpose.

I would encourage readers of my blog to visit the Soldier On website and have a look at what John and Cavin have achieved in a short period of time.

Posted by Lost Medals Australia at 16:16 No comments:

The post about George Clifford has been updated.
Posted by Lost Medals Australia at 07:25 No comments:

Ronald Charles Brookman was from Melbourne and in 1941, at age 23, he enlisted in the 5th Battalion of the Victorian Scottish Regiment as V55082 PTE Brookman. However, later in 1941 he transferred to the RAAF and served as 410114 Flight Sergeant Brookman.
Ron was a member of 463 Squadron of Bomber Command and was a navigator on Lancaster aircraft. On 26 September 1944 while on a bombing mission over France, Ron's plane came down. This is the AWM record of the flight. Ron and the rest of the crew are buried at Wissant Communal Cemetery near Pas De Calais. This link shows the panel at the AWM where Ron is listed.
Ron's family placed several notices in the news paper after his death and this article also appeared.

Ron's WWII War Medal came to me from the NSW RSL. It had originally been found around Tea Gardens. Using electoral rolls I established that Ron's brother Harold lived in that area for several years and died in Port Macquarie in 2009. Harold also served during WWII. Harold and Ron had two sisters, Gwen and Edna. It didn't take long to follow both Gwen and Edna through the electoral rolls up until 1980. Edna was married to another WWII veteran, Donald Miller, who was awarded a Mention in Dispatches. This is the AWM document about the award.
Following a hunch I had a look in the White Pages in the general area I knew that Edna was living in 1980 and to my surprise I found her listed at the same address. So 30 minutes after the medal arriving in today's post I was talking to Ron's sister.
When looking through the memorial notices for Ron one of the last I came across was from Ron's fiancée, Clare. After Ron was killed, Edna stayed in touch with Clare for many years. Clare subsequently married and had four children.
The returned medal tally is now 1188. 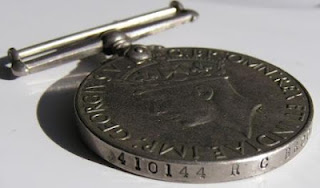 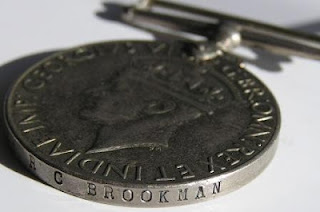 The search for the family of 238 PTE David Fair started last Friday when I received an email from the NSW RSL. The email started as a request from the NSW Police Force to look for David's family after his medals, Silver War Badge and ID disc were found near Liverpool, NSW. What struck me immediately was that the medal group consisted of the BWM, the Victory Medal and the Croix de Guerre. This was quite unusual so I checked to see it this was actually awarded to David.
As I was checking on my iPhone, I found it easier to look at the basic details on the AIF Data Base rather than the NAA web site. From the AIF page I could confirm that this medal was indeed awarded to David and this is the citation:

'During the Battle of MESSINES Corporal FAIR commanded a Lewis Gun Section on the right flank of the whole attack: immediately the mine was exploded he rushed forward and occupied the crater. Although subjected to very heavy artillery and machine gun fire and although all but one man in his section became casualties he kept his gun in action throughout the operations and did most excellent work.'

These links give details of David's unit, the 33rd Battalion, AIF and the Battle of Messines.

With David Fair's details confirmed, I traced him and his family through Ancestry. David was a farmer and I could see that his son farmed the same property after David died. On a hunch I had a look in the White Pages and saw that property was still listed as having a member of the Fair family living there. However, I also noticed that the son was living in a town near by. I then provided this information to the Police Officer who made the initial enquiry. Arrangements are now being made to return the medals to David's son.
The returned medal tally is now 1187. 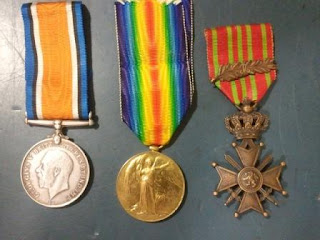 Posted by Lost Medals Australia at 15:25 No comments:

I have recently been asked to return the WWI medals awarded to 1604 Harry Frederick Arthur Dixon. Harry was a member of 16th Battalion, AIF which is still on the ORBAT as 16th Battalion, Royal Western Australian Regiment.
Harry enlisted on 11 Jan 15 and by May was at Gallipoli. He received a gun shot wound on 9 May 15 and had to be evacuated. Later, in France, he was hospitalised for frostbite and wounded a further two times. In 1917 he was sent to England and visited relatives. From the descendants of those relatives I have been given permission to reproduce these two photos of Harry. 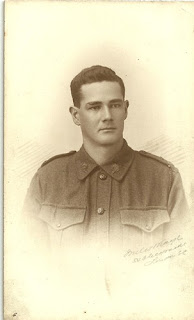 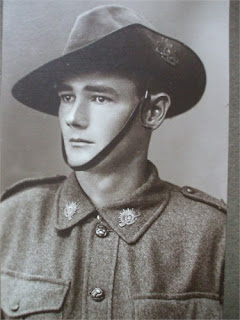 Harry returned to France on 29 Dec 17 and unfortunately was killed in action on 8 Jul 18, just four months before the end of the war.

As far as I can work out Harry had seven siblings. Some of the sibling died young, never married, had no children or I just can't find any more details.

I managed to follow the family of Harry's sister Isobel Vierk Dixon. Isobel married James Harry Halse. James served during WWII and died in 1982. James and Isobel had two children. It is the family of these children who I will send the medals to.
The medals were found in a rusty tin that was dug up in a Perth back yard by a plumber doing some repair to sewerage pipes. His medal entitlement was the 1914-15 Star, The British War Medal and the Victory Medal. Unfortunately, the original British War Medal has been lost. Many thanks must go to John D who sent the medals to me. After the plumber dug them up they passed through several hands before John put in the effort to look after them and have them remounted.
The returned medal tally is now 1184. 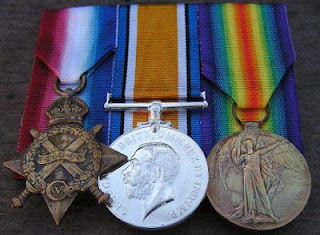 Update 12 Sep 12
After an email from Harry's distant relative, Jim, who kindly provided me with the photos of Harry, I decided to have a look at the 16th Bn war diary. First of all I realised that I had mistakenly listed Harry's date of death as 13 Jul. This was the date the entry was made in Harry's service record and the correct date of KIA was 8 Jul 18. This prompted me to research where Harry was fighting at the time so I had a look at the war diaries.
On 4 Jul the Australian 4th Brigade was involved in the attack on Hamel Wood. On 6 Jul, 16th Bn moved up to the front line trenches that had been captured earlier. On 8 Jul the Germans made a counter attack and it was during this fighting that Harry was killed. The entry states:

'Enemy very busy during day; sniping at the least movement. During the late afternoon a post which was pushed out last night was raided by the enemy. It was first of all dealt with with rifle grenades and pineapple bombs, and an attempt was made to rush it. Several of our fellows were killed and wounded, and two cannot be accounted for. Night was quieter than the previous one. Weather fine and hot. Casualties - 7.  Wounded 6.'

In the war diaries only officers were named when they were KIA and other ranks were just listed as a number. I found Harry named in an appendix to the war diary as having been killed in that action.

This link provides a bit more detail about the Battle of Hamel, The photos below were taken at the Hamel Memorial in 2009 by Anna Llanwarne. The first shows the AIF Memorial, the second the village of Hamel from the memorial and the final photo is of the remains of trenches adjucent to the memorial. 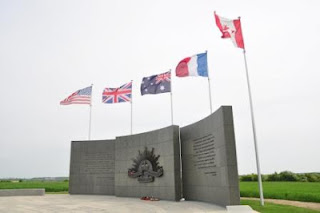 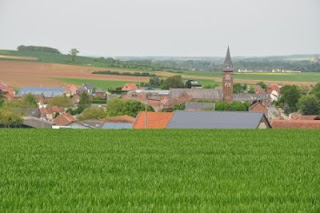 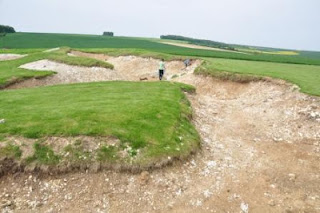 Update 25 Sep 12
I have recently been contacted by another relative of Harry Dixon who came across this post. David is Harry's great nephew and he has provided me a newspaper article in which Harry is mentioned. The article appeared in the Western Mail, Thursday 19 October 1939, page 2.

This must be the month for badges and medallions. Last month we returned a welcome home badge and yesterday I received a Sports Medallion awarded to LT Austin James O'Connor
Austin was a 24 year old Commercial Traveller from Melbourne who was appointed to 7th Battalion, AIF on 6 March 1916. He was taken on strength with the battalion in France just over a year later.
On Anzac Day 1917 the 1st Australian Division held a sports carnival and Austin won the hurdles race. For this win he received a silver medallion with the following engraved on the reverse:

Austin was wounded in action on 20 September 1917 and died from these wounds four days later.
This medallion was sent to me by Brian P of South Perth who initially contacted the RSL National HQ and he was referred to me. The medallion is slightly bigger than a 10c piece and will be returned to Austin's niece. 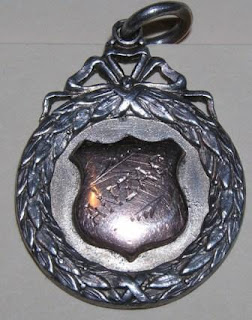 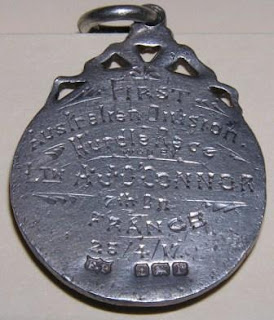 Today I stumbled on the PDF version of some brochures produced by the Department of Defence that provide concise explanations of medals that have been awarded to Australians. These link will take you to each brochure:
The Australian Honours and Award System
WWI Campaign Medals
WWII Campaign Medals
1945 to 1975 Campaign Medals
1975 to Present Day Campaign Medals
Long Service Medals
Miscellaneous Medals and Badges
Posted by Lost Medals Australia at 17:00 3 comments: