I've mentioned in the past the wonderful relationship I have with the Directorate of Honours and Awards. This particular search was a referral from Tony at Honours and Awards.
The medal they have asked me to look at is the Australian Service Medal 1939-45 awarded to NX52651 James Gibb Hamilton.
The search started easy enough but as I looked at the electoral rolls on Ancestry, I found a number of people with the same unusual name living in different states at the same time. There were a couple of death notices on Trove and in the Sydney Morning Herald that relate to this family and initially it was very confusing. However, I found a phone number in the white pages with the right initial and name combination so I took a punt and gave the number a call. I ended up speaking to the cousin of James who was able to direct me towards another cousin (James' brother). During this first conversation I was able to assist the gentleman by providing him a copy of his father's British Army medal card from WWI.
As part of my research I found out that James' father had received the Military Medal during WWI. He was 5114 Archibald Hamilton and served in the 2nd Battalion, AIF. His service record is 108 pages long and makes very interesting reading as Archie was classified as a deserter after the war concluded when he returned to his birth place in Scotland to see his family. This was eventually resolved and his medal entitlement was reinstated.
This is the family connections I worked out to find James' brother Ferguson:
- James Gibb Hamilton (1) and Agnes Campbell Hamilton had six children including; Archibald Ferguson (1), James Gibb (2) and Ferguson (1).
- Archibald (1) also had a number of children including; James Gibb(3), Ferguson (2) and Archibald (2).
- Ferguson (1) had two sons; James Gibb (4) who served as VX69392 and Ferguson (3).
It is James Gibb(3) who I was looking for. James Gibb(3) married but had no children. He died in the 70s. His brother Ferguson (2) is still alive and I'll be returning the medal to him.
The death notices that helped me unravel this are at these links:
Agnes Campbell Hamilton
Archibald Hamilton
I hope the links work and it is a bit of a search on the page to find each notice. I must admit I did a double take when I came across Archie's service record as this is the name of the main character played my Mark Lee in the film Gallipoli.
The medal should arrive in the post next week and then I'll add a photo. Thanks to John and Andrew from the RAN who forwarded this medal to Honours and Awards in the first place. The medal returned tally is now 1106.
Post update 2 April 2012
I've now added a photos of this medal. 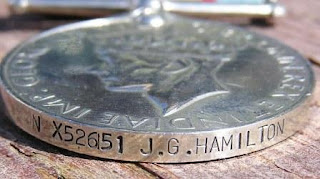 Posted by Lost Medals Australia at 15:02