188 SGT Sidney Ernest Parkes was one of the original members of the 6th Australian Light Horse Regiment. Prior to his WWI service, he fought in the Boer War with the 1st NSW Mounted Rifles. He was wounded in action which reported in the papers at the time.
Parkes arrived at Gallipoli early in the campaign and was killed in action on 24 May 1915. He is buried in the Shrapnel Valley Cemetery.
Parkes must have been quite notable in his regiment as he is even mention by the famous Trooper Bluegum in an article published in the Sydney Morning Herald.
Thanks to Max H from the Toodyay RSL who sent me the medal.
The returned medal tally is now 1703. 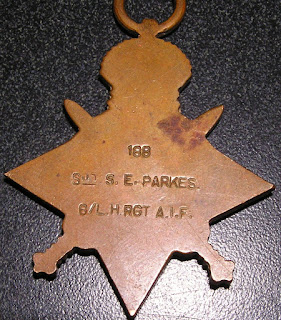 One of our return stories in the media

The return of the WWI Memorial Plaque awarded to the family of Albury James Wetherall that we returned recently has been featured in a regional TV story.
Posted by Lost Medals Australia at 12:39 No comments: