This group of medals and the search to find the family resulted in a pretty interesting story.
The medals were sent to me by the NSW RSL and comprised a WWI British Army group and WWII Australian Army group. Both groups named to P Wynne. Initially, I thought it was father and son groups but information from the UK census, immigration records and the Australian electoral rolls made me think it was the same person.
The only issue I had with this theory was that the birth dates of WWI soldier and the WWII soldier was 5 years apart. My conclusion was that Patrick lied about his age when enlisting for WWII.
Patrick's WWI service was with the Royal Dublin Fusiliers and the Royal Dublin Corps. After the war the Wynne family immigrated to Australia in a couple of waves. Patrick arriving with his sister Agnes in 1923.
During WWII he served as NX110473 and it was his enlistment location and NOK name which gave me the only clue to who this Patrick was as there was about 20 candidates to choose from.
He was living in Rosebery NSW when he enlisted and his next of kin was Kathleen. The only people that I can find with this name and location combination in the electoral roll was the family of Thadeus and Kathleen Wynne. Using this information I back tracked through all those records I mentioned and managed to confirm that WWI Patrick and WWII Patrick was the same man.
Patrick did not marry so it was the decedents of one of his many siblings I was looking for. Unfortunately, the family suffered several tragedies but I was able to locate Patrick's great niece.
Thank you to Claudia at the NSW RSL.
The returned medal tally is now 1741. 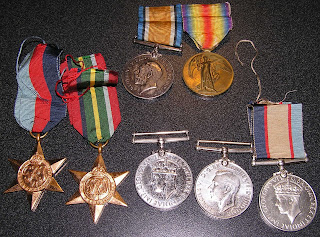 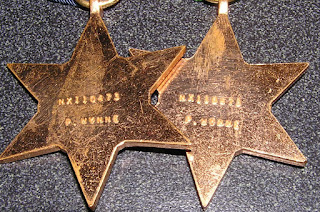 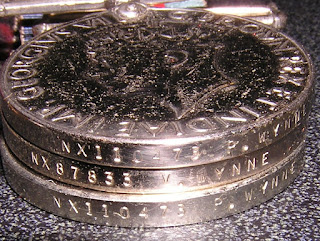 This is a little hard to explain but here goes.
Last Tuesday I received a parcel from the Directorate of Honours and Awards. The parcel contained three separate groups of medals and numerous other items. Initially these had all come from the Victorian Police who wanted to see them returned to the rightful owner.
The first WWII group was awarded to QX62854 Harry Francis Smith. The second WWII group was named to Q266459 Edward Claude Holmes. What immediately struck me about this pair is that they are lazer engraved which means they were only issued in the last 10 years or so. The final group was contemporary and named to S C Holmes. There was one connection with the same surname but was Smith also related?
It took about 5 solid hours on Wednesday night to untangle the family connection. What I worked out was that Harry and Edward were related by marriage. I could follow the Holmes family through the electoral rolls and the first big break came when I found Stephen Charles Holmes listed, in 1980, as a solider serving with 6 RAR. Then the trail went cold.
I took some tricky research on Thursday to workout that Stephen later became a Padre and did some service with the RAAF. I then tracked him down to a parish in Victoria only to be told he had moved on in 2013. However, I was given the name of another church in Melbourne to which I sent an email and then the waiting started.
This evening Padre Stephen rang me. My message had got through. Stephen tells me that he thinks the medals might have been thrown out accidentally and that he did spend some time searching for them. I'll be sending all this back to him soon along with the WWI whistle that Stephen tells me was used in the trenches.
Thanks to the Leading Senior Constable Penelope D from the Victorian Police, Shane D from Honours and Awards and my mate Roland for his assistance. This search ended up taking just three days to complete which I'm pretty happy about.
The returned medal tally is now 1734. 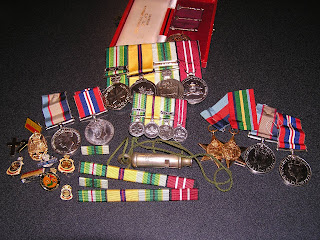 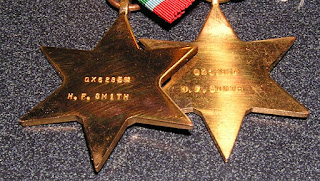 A few bits of research have come to a conclusion over the last day or so. This one has a international connection as well as a local one for me.
I received the WWI Victory Medal awarded to 46124 Charles Henry Hutton Black of the Royal Engineers from Jan C of Canberra. How this medal came to be in Australia is a mystery.
Other than Black's Medal Index Card there was only one other reference to him that I could find. That was on Ancestry.com and a family tree owned by Andrew V who is Black's great grandson.
Andrew lives in Scotland which makes the mystery of how the medal ended up in Canberra even more interesting.
The returned medal tally is now 1717.

Posted by Lost Medals Australia at 20:48 No comments:

This piece of research was done for the Victorian Police. We have a great relationship with them and we are currently in the middle of looking at several cases for the Victorian Police.
827 John Henry Sharpe was born in England in 1897. His family moved to Victoria in 1902. John was the son of George Frederick Sharpe and Eleanor Theophila (nee Chapman). There is no evidence that John married or had children. Indeed, when he enlisted for WWII he gave his NOK as his father George just as he had done for WWI. The family lived in Oakligh until about 1924 but then took up farming near Loch, Victoria.
John had several siblings and I've been able to link the police with John's nephew.
The returned medal tally is now 1716. 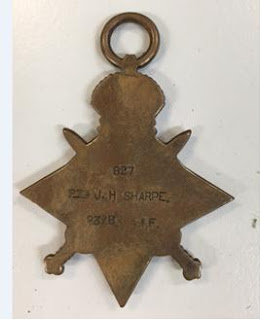