In December 09 I received the National Medal awarded to Kelvin Harold Harvey. I ran in to a problem immediately. As can be seen by the link itsanhonour has him listed as Kevin and the date engraved on the reverse is different to that on the website.
It took a fair bit of back tracking and through Yuku we narrowed the search down to a reference to Kelvin at Broken Hill. This made sense to me as the medal was sent to me via Peterborough SA. Armed with this link, Bill tracked down Kelvin who i still very much alive. I spoke to him tonight and he told me the medal had been stolen about 20 years ago and he is really looking forward to getting it back.
The returned medal tally is now 612. 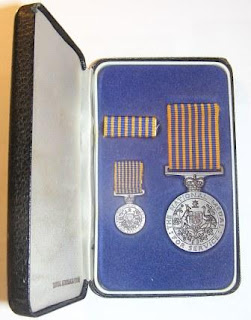 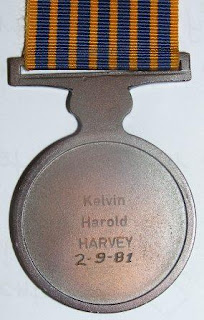 Posted by Lost Medals Australia at 18:46 No comments:

QX49183 DUNCAN THOMAS MCGREGOR background was very difficult to piece together and the story following his death in 1966 was even harder to follow.
Following McGregor's death his wife married twice more. After her death in 2003, her third husband thought that McGregor's medals should go back to his family rather than being kept by someone who didn't know him at all.
That lead to yet another difficult search that tested everyone's research skill. That was until today when we tracked down McGregor's nephew and the medals will be returned to the family soon.
The returned medal tally is now 611. 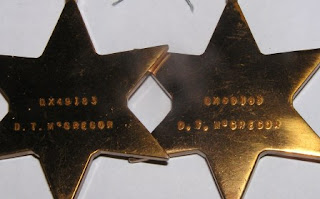 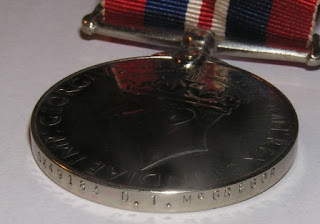 The naming on this medal is a little unusual. It is slightly above centre on the edge rather than being right in the centre.
Posted by Lost Medals Australia at 20:46 No comments:

VX11935 Ernest Reginald Barton proved to be a bit difficult to find. There wasn't much details from his service records to work with but this is what Bill and Yuku team pieced together.
Ernest was born at Broken Hill in 1906 and his mother was Florence Edith Hughes. His fathers name is unknown. After her first husband died Florence then Married Henry Edward Charles Bromwich at Broken Hill in 1912. They had one daughter, Mavis Jean, born in Sydney 1918 and died in Mudgee 1973. This makes Mavis the half sister of Ernest. Mavis Jean Bromwich married Alan Cecil Day in 1939 and they had two sons, Richard and Max.
Based on a bit of educated guest work I wrote to the a Max Day in Mudgee and he is the fellow we were looking for. Max is Ernest's closest relative and having spoken to him and his daughter tonight I know these medals are going to be well looked after.
The returned medal tally is now 608. Posted by Lost Medals Australia at 20:24 No comments:

LAC Lionel Robins Sando was from South Australia and served in the RAAF during WWII. Like many others her didn't deploy overseas but provided valuable service to the war effort in Australia. His medal entitlement would have been the War Medal and the Australian Service Medal 1939-1945. The pictured medal is his ASM.
The returned medal tally is now 603. 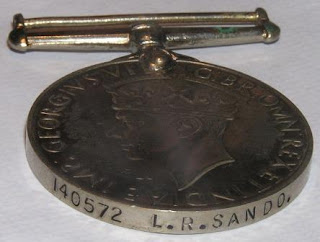 Posted by Lost Medals Australia at 20:20 No comments:

Thank you for your comments

I thought it was well and truly time to thank all those who have put a comment on this blog. I really appreciate the feedback.
Unfortunately, I have also discovered that a few spammers have tried to hijack posts and place comments that lead the reader to suspicious websites. I've removed all these.
Glyn
Posted by Lost Medals Australia at 18:16 No comments:

This medal has proved to be a bit out of the ordinary. It is the Long Service and Good Conduct Medal awarded to 1079 WO1A Arthur Joseph Thomas. The WO1A threw me at first. However, I have found out that there was previously two levels of WO1 based on certain qualifications and the higher (A) received more pay. Thomas was a draftsman in the Royal Australian Engineers which made him eligible for this higher grade.
Getting a lead on Thomas proved difficult. There is no listing for him for either WWI or WWII. One of my researchers, Morris from Queensland, found a record in the NAA and had it digitised for me. This proved to be invaluable. It is the application for Thomas to be commissioned in 1938. One piece of information proved to be the key for this search. Thomas' wife is named in the application (page 16). Her name was Elizabeth Gordon Thomas. While Arthur Joseph Thomas is quite common, the inclusion of Gordon in his wife's name is not. I was quickly able to find her death details. This meant Bill could narrow the search in the death notices and electoral rolls. The death notice gave the name of their daughter which in turn led to her two sons, Peter and John. I've spoken to Thomas' grandson Peter and I'll return the medal shortly. 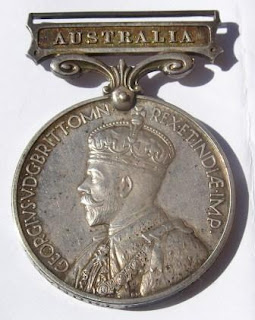 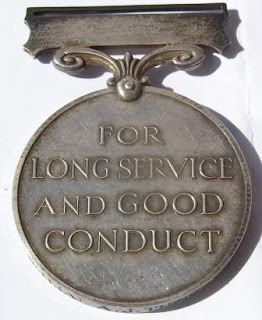 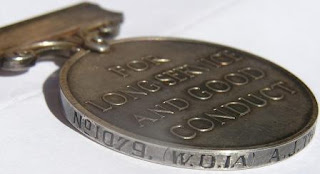 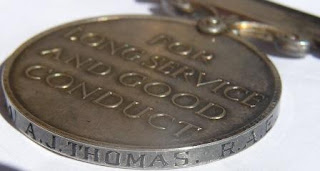 The returned medal tally is now 602.
Posted by Lost Medals Australia at 16:05 No comments:

Last Friday I was contacted by Glenn from Melbourne who had found a medal while demolishing a house. He asked me to start the research and he would send the medal to me. The medal is a WWII star awarded to VX81773 Reginald Francis Day.
I came across a 2001 entry on RootsWeb about Reg and tracked down the writer. Even though the entry was old he was able to provide me some great leads. His mother put me on to another relative who in turn put me in touch with Reg's nephew. Now here comes the best news, Reg is still alive.
I spent some time on the phone to Reg tonight and have arranged for Glenn to return the medal to him.
The returned medal tally is now 601.
Posted by Lost Medals Australia at 19:07 No comments: