30 minutes ago I was included in a conversation on a Facebook family research page that I'm a member of. A lady was looking for a relative so that she could send the WWI medals awarded to Arthur Jolly Argall to. It took a few minutes using some of the resources I have available to locate Arthur's great nephew. I was soon speaking to him and they are now connected.
It was a great conversation to have just before Anzac Day.
The returned medal tally is now 1810.
Posted by Lost Medals Australia at 17:45 2 comments:

Hi everyone, the hits on this blog have gone through the roof over the last couple of days as we approach Anzac Day. Most of the searches have been for replacement medals. This link is the best advice that I can give:
http://lostmedalsaustralia.blogspot.com.au/2008/01/duplicate-replacement-and-replica.html
If you have any questions please send me an email. My address is in the welcome paragraph.
Glyn
Posted by Lost Medals Australia at 16:56 No comments:

By now most of you who follow our returns will be well aware that there are on an increasing number of occasions, many families that don’t wish their details to be released.
The following is two examples of both sides of the coin as it were.

George’s medal was one that arrived in a jiffy bag from the Victoria Police in June 2015. It has been a long search for his next of kin, in this case his sons. But when I finally found one of them the exchange went like this:
“No you can’t have one of my father’s war medals, we haven’t lost them in fact my brother who has them, wears them every ANZAC Day”
You can imagine how I felt at the time all that work and getting nowhere.
The rest of the story takes place a week later with a phone call from George’s son:
“Do you still have dad’s medal?”
“Yes” I replied.
“Oh that good it is Dad’s medal. My brother was burgled some years ago and Dad’s medals were taken. My brother went and got a set of replicas made up and has worn them ever since not telling anyone about the theft of the original medals”.
It was after some discussion of how I would send the medals back to the son, that I received the request to not publish any information that would identify the family.

The second story attracted some publicity and best explained at this link. 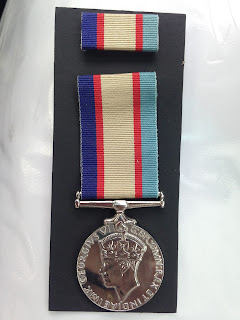 The returned medal tally is now 1808.

Posted by Lost Medals Australia at 14:31 No comments:

125890 William John Frederick Hawley was 19 when he joined the RAAF in 1943. He was easy to follow through the electoral rolls but in 1980, when the rolls that are available on line finish, he just disappeared. What I did know was that he spent his whole life in Traralgon, Victoria and I found this interesting story about his father which also mentioned Bill.
Once again it was Ancestry.com.au which came to the rescue and I found the family on a tree belonging to Bill's niece. The medal will soon be returned to the family.
Thank you to Sandra O'H who sent me the medal.
The returned medal tally is now 1806.

In 1951, Tweed District Boys Band member, William C, aged 11, was visiting Grafton for the Region Band Competition. At the rear of the Old Grafton Fire Station, William found the WWI medal awarded to 6595 Albert Simmons.
As can be seen in the pictures, Albert's medal is in poor condition and and was probably lost when it fell off the ring that was attached to ribbon. In his service record, there are copies of letters that Albert sent to the Army after he lost his discharge certificate and Returned from Active Service Badge. However, there is no correspondence about him loosing his medal.
A couple of weeks ago William visited the HQ of the NSW RSL asking for the medal to be returned to Albert's family. The medal was then sent to me by Lindsay, one of our RSL contacts. Luckily for me, Albert's grand daughter, Marilyn, has posted her family tree on Ancestry.com.au so it was pretty easy to locate Albert's descendants. I'll be sending the medal to Marilyn in the very near future.
The returned medal tally is now 1805. 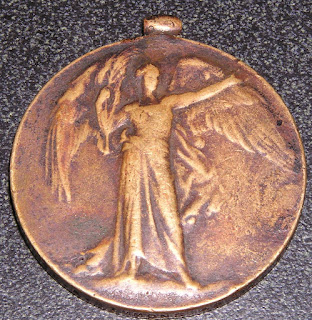 Posted by Lost Medals Australia at 18:05 No comments:

The Victory Medal awarded to 3336 Walter Ewart Brown came to me from the WA RSL. He was 40 when he enlisted in Oct 1916. After his training, Walter was posted to 12th Battalion, AIF. His service record reveals nothing beyond a normal period of service during WWI.
Walter was born in NSW but enlisted in WA. On discharge he remained in WA. He didn't marry so our search focused on his siblings. One brother was Stuart Markwell Brown and it is though this line that we have been in contact with Walter's great nephew.
Thanks to the WA RSL and Anne W who managed to find that last piece of information.
The returned medal tally is now 1804.