Douglas McGuire - a man of many numbers

This search really had me stumped for a while. Firstly, to correctly identify who I was looking for and then to locate the family.
I was contacted last week by Jim T in WA and he provided the naming on a medal as WP37316 D.G. McGuire. This threw me a bit as the service number didn't give me a hit in the WWII nominal roll. I know there are some different letter and number combinations beyond the usual state/militia/2nd AIF/service arrangements but this was really strange.
The only D.G. McGuire who came close to fitting the bill was Douglas George McGuire. The nominal roll entry shows two numbers; 5400 and WX30146. The 5400 number immediately suggested a post WW2 number issued after the Australian Regular Army was formed in September 1947. So I was looking for a soldier who continued to serve but I needed to confirm the link to the name on the medal.
I followed Douglas to his death in 2009 and instantly hit another hurdle. His name was spelt differently - this time MacGuire. So it was back to the start and it was then I confirmed it was the same person. I found records showing that Douglas George MacGuire was born on the same date and in the same location as the Douglas George McGuire on the nominal roll. There must have been a period where Douglas had another number altogether and this is the one on the medal.
Following WWII, Douglas and his wife were posted several times to Ammunition Depots in different states. They spent some time in Albury, NSW and then at Northam in WA. Douglas took discharge in the mid 1960s and they settled in WA. However, not long after this I lost all track of Douglas and his wife, Zelma, until the details I found out about his death. So I turned to his wife.
I found a 1952 death notice for a lady who died in Rockingham, WA which mentioned her grand daughter, Zelma and her fiancée Doug McGuire of Northam. Bingo. Other death notices game me the names of Zelma's siblings. After a couple of false starts I focused on one sister who had an unusual initial-surname combination. After checking the details in the electoral rolls I looked up the name in the White Pages and sure enough there was the same initial-surname combination listed. I took another punt and was soon talking to Zelma's sister.
From her I learned that Zelma and Douglas divorced and she had remarried. The best news was that Zelma is still alive but now goes by the name Thelma. I don't think I would ever have worked that out using the electoral rolls. I've since spoke to Thelma and I'll send her the medal soon, she is then going to pass it to her and Douglas' daughters.
Thanks Jim.
The retuned medal tally is now 1251. 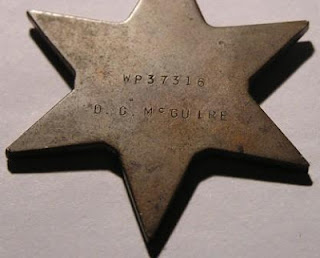 7903 Sapper William Henry Moss was almost 35 years old when he enlisted on 29 June 1917. William was allocated to the Tunnelling Company reinforcements. After training he departed Melbourne late in 1917 and arrived in France on 24 January 1918. His service record suggests that one month later he was in England where he remained until June 1918 and was returned to Australia. The service record gives no indication of the reason for this early return. AIF tunnellers were featured in the film Beneath Hill 60.
William's medal entitlement is the British War Medal and the Victory Medal. He died on 1 May 1935. Thank you to Mrs Marshall who sent me the medal and Anne H who did the research which provided the key that unlocked what I had already put together.
The retuned medal tally is now 1250. 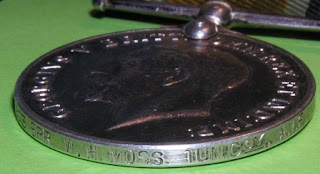 Recently, the National Archives of Australia have updated their website. I have now updated my service record search tutorial to reflect this very minor change.
Posted by Lost Medals Australia at 13:46 No comments:

George Audley Robinson's service record makes interesting reading. He initially enlisted in 4th Bn AIF on 17 August 1914. His service record has a 2nd attestation paper for enlistment in 2nd Bn AIF on 31 August 1915. From the early pages of the record it is clear that George left Australia in October 1914 but was returned to Australia in May 1915 because he had a venereal disease. When he landed back in Australia he deserted before presenting himself to the authorities. It is not until page 22 of the service record that the story becomes clear. The dates of his return and then re-attestation are given and the authority this approved the re-enlistment.
George finally joined his battalion in France in July 1916. He spent some time in hospital over the next couple of years and then in September 1918 he received a gunshot wound which resulted in evacuation to England. George finally retuned to Australia early in 1919.
George's full medal entitlement is the 1914-15 Star, the British War Medal and the Victory Medal. It is the British War Medal that I'll soon be returning to George's grand daughter. The medal is named with George's original regimental number - 227, not his second number - 4570.
I received this medal yesterday afternoon from Roger A who was very keen for it to be returned to the family. Roger is a Canberra local so he dropped it off. A few hours of scratching around led me to Janette (George's grand daughter) who has told me the medals have been missing for many years.
The returned medal tally is now 1249. 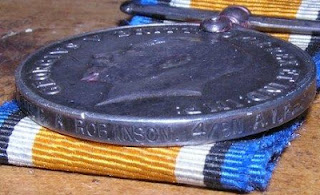 N109749 Hubert Hope Wallace was a member of the militia during WWII rather than the 2nd AIF. I suspect that this was due to Hubert's age. For his serivce he would have been awarded the War Medal and the Australian Service Medal 1939-45. It is the War Medal that I'll soon be returning.
This medal we sent to me by my friend Sandra. Within two minutes of opening the parcel I located Hubert on an Ancestry family tree. 10 minutes later I was in contact with Hubert's grand daughter.
The returned medal tally is now 1248.

Posted by Lost Medals Australia at 11:54 No comments: