This story has one constant that stretches over 80 years and was the key that helped me solve the search.
3487 PTE Joseph Marlow served in the 15th Battalion. Marlow initially joined the battalion in Egypt before seeing service in France. In 1917 he was taken POW by the Germans. His Red Cross records show postcards to his mother. His records show that his next of kin was his mother who lived in England. After the war Marlow lived in Queensland before settling in Sydney.
Marlow married late in life, at the age of 58, to Annie May Siddens. Annie lived with several members of her family at an address in Annandale, a Sydney suburb. By using the Electoral Rolls on Ancestry and the NSW Birth Deaths and Marriage records I was able track the family through several marriages which saw name changes. However, I know I was on the right track as the address that successive generations lived at from 1930 was the same. I've been told the family originally rented the house before they purchased it and now the fifth generation lives there.
Marlow's file showed that he wrote to the Department of Defence in 1964 stating he had lost his medals and  requesting replacements At the time Marlow had just moved in the the Narembeen War Veterans home. Marlow died in 1973
These medals were originally sent to me by John S. The group consists of the 1914-15 Star, the British War Medal and the Victory Medal. They are part of a large collection he sent and now there is only one WWII pair left.
The returned medal tally is now 1086. 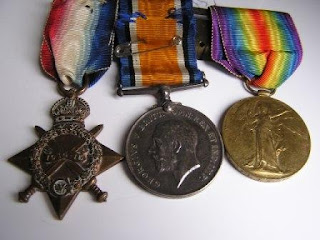 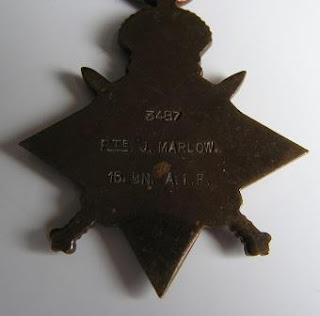 Posted by Lost Medals Australia at 13:14