It is not uncommon for searches we conduct to start well, hit a series of brick walls and then pick up momentum again. That is the case with the WWI Victory Medal awarded to 22400 PTE Henry Hayden , Liverpool Regiment.
The medal was sent to me by Julie from Perth, WA. It was found amongst her father's possessions having been bought at auction many years ago. Julie was keen to see the medal back with the family so she did a fair bit of research herself.
Julie had found the following information about Henry:
“Private Hayden died on 30 July 1916 in the area of Guillemont in France. It is on the eastern edge of the British Expeditionary Force's sector of the Somme battlefield. He was a member of the 20th Battalion The King's Liverpool Regiment.”
This link is the Henry’s CWGC entry.
In the 1920s Henry’s son, William Henry Hayden, moved to Australia and was living in Adelaide. Based on this information from Julie, I worked out that William later moved to Victoria and served during WWII (VX4226 PTE Hayden). He died in 1959 and is buried in Fawkner Memorial Park, Melbourne. That is where I ran in to a brick wall.
On a hunch, I enlisted the help of one of the fantastic Yuku ladies, Sue. Sue was able to provide me with the names of Henry’s other children which were Leonard, Joseph, Emily and Thomas. Leonard also served during WWII (SX 6372 PTE L.J. Hayden) and returned to South Australia after the war. Sue also provided the name of one of Leonard’s sons and a possible address in SA.
This morning I rang the people listed at that address and sure enough, it is the right family. Leonard’s son John died seven years ago but his wife Rita was familiar with the Hayden family history. She is quite excited that this medal will be returned to the family very soon.
The returned medal tally is now 696. 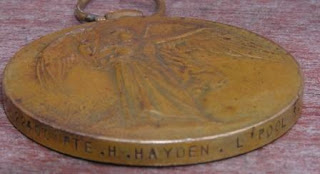