This is a fantastic story of wonderful members of the community doing the right thing.
Recently, a Salvation Army shop in Queensland received a box of items from a deceased estate. When sorting through the cartons the Salvation Army staff came across four WWII medals awarded to N234365 Leslie Charles Gaterell (first mentioned here). The shop contacted the Currumbin RSL who in turn sent an email to the RSL National HQ and the state branch HQs of New South Wales and Victoria requesting help. Jude, our Victorian RSL state branch HQ contact, asked Bill to have a look and he soon solved the case. Indeed, Bill says it was one of the easiest he has been involved with. Bill has since spoken to Leslie’s daughter Carol and she has collected the medals from the Currumbin RSL.
I’m so pleased that our network was able to quickly resolve this case and we send our thanks to the Salvation Army for taking that first step to see these medals get back to the family.
The returned medal tally as a result of this return is 1038. 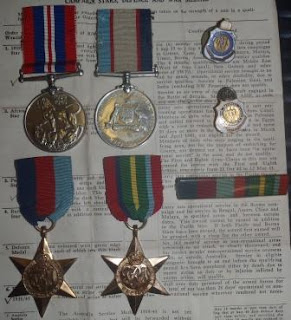 Posted by Lost Medals Australia at 09:41 No comments:

In 1915 when he enlisted, Charles Pfitzner, did what many young men of German heritage did, he anglicised his surname. It was as 58 PTE Charles Frederick Fitzner that he served with 41st Battalion, AIF. This return is first mentioned here. He also added a 1/4 inch to his height to pass the then minimum of 5 foot 2 inches to ensure passage through the recruitment process. Charles appears in this photo of the 41st Battalion band.
We were fortunate in our search that Charles later changed his next of kin to his sister Alice. It was this that allowed us, after a convoluted search that took us from Queensland to Western Australia and back to Queensland, to find the Pfitzner family, and finalise our search.
Charles only had one child, Leonard, who was tragically lost while serving in the RAAF during WW2, whilst on bombing operations over Germany.
Charles's British War Medal will go to his nephew Alan, who has graciously accepted the responsibility of guardianship of Charles' medal.
Thanks to Barry of Gatton who sent the medal to me originally.
This takes the returned medal tally to 1033.

Seven medals and a paybook

This post is a quick update on some recent successes. I hope to provide individual posts with photos in about a fortnight. Here are the basis details:

Posted by Lost Medals Australia at 19:42 No comments:

The return of the Durrant group was finalised on Remembrance Day when Bill met the family and handed back the medals. Bill reports that the family was very emotional and that is understandable.
This return was due to the efforts and unselfish acts of several people after the medals had been found and truly reflect the Anzac spirit.

We are hopeful of some pictures in the near future.
Posted by Lost Medals Australia at 06:57 No comments:

When Bill received the Durrant group, he was also given a WWII Royal Navy Distinguished Service Cross group. Given the way the medals were found and that the Durrant group was stolen, we made the assumption that the DSC group was also dumped after a theft. That is where this search ran into trouble.
Unlike Australian WWII medals, British medals were not individually named. We knew that the medals were genuine but who the exact recipient was proved more difficult. I then asked the very talented members of the British Medal Forum for their help. Several members were able to provide advice on the type of service an individual would have had based on the combination of medals. Their specific knowledge of medal entitlements and qualifying requirements proved very valuable when narrowing down likely candidates. Two members, Stewart and Lloyd went to great lengths to look at the London Gazette and narrow down even further who we might be looking for.
Stewart provided two possible names, one of which was the most likely. This was Lieutenant Commander George Raymond Grandage. An online post about Grandage’s service by his son Jerry gave us another clue. Jerry lives in Melbourne and that is where the medals were found.
Bill has recently been in contact with Jerry and he confirmed that the medals were stolen about 12 months.
This was a wonderful bit of research from the experts of the British Medal Forum and I can not thank them enough for their unselfish efforts.
This group also includes a Mentioned in Dispatches.
The returned medal tally is now 1031. 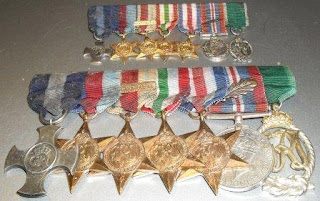 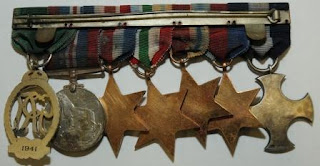 Update 26 Dec 11
Recently, Bill met with Jerry Grandage and returned Lieutenant Commander Grandage's medals to him. The first photos show Jerry unwrapping the medals which he thought he would never see again. The second picture shows Jerry and Bill discussing the medals. 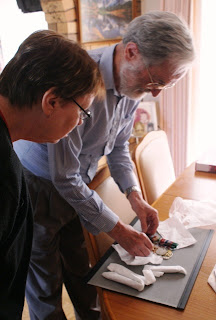 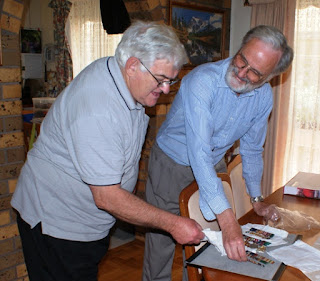 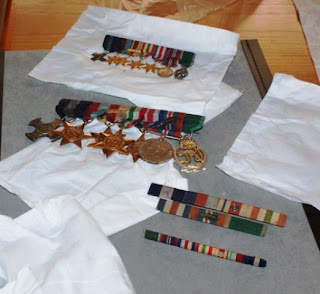 This return is of a significant Australian medal group awarded to Major General James Murdoch Archer Durrant. Bill did some fantastic research to very quickly resolve this case. Here is Bill's story

Normally our searches begin with a lost medal or medals, they end when they are returned to the family. But rarely is that the whole story, rarely are those who are involved mentioned, our respect for the privacy of our team is to Lost Medals, paramount.

Major General James Murdoch Archer DURRANT, was an exceptional soldier, so was the search for his next of kin involving as it did the Victoria Police, the RSL and others.
Stolen from his grandson’s house, even though the medals show the after effects of being discarded in a park soon after they were stolen they are still a magnificent example of a great soldier’s service.

The Decorations and Medals in order are:

As I said at the start of this story there were many people involved, each contributing is their own special way:
The anonymous finder of the medals.
Constable Kate MARTIN, who with the staff at Pakenham Police Station, were determined not to let the medals sit on a shelf in the lost property office, and all of whom took a personal interest in the search.
Susan HATTON a genealogist, without parallel.

Dean from the School of Signals (IS Branch)
But the story does not end there. It will end on Remembrance Day when James DURRANT's medals are returned to his grand daughter to be worn at the Watsonia RSL Remembrance Service. It is there that Part 2 of this story will be written, and the medals of a proud ANZAC that have been missing too long, will go 'home'. 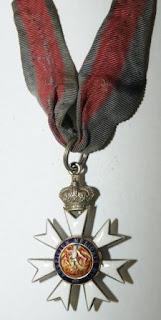 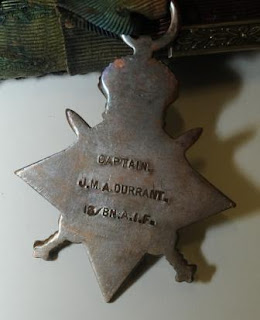 Update 3 July 2012
The photos of MAJGEN Durrant's medals show how poor a condition they were in when they were found. We have recently been provided with a photo of medals after they have been cleaned up and remounted. 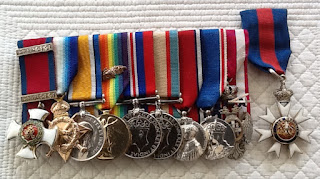 This return is the result of work done by Bill and our friends of the Australian Surnames Group. This is the story Bill recently posted:
The search for a NOK of 3180 John Merton began on the 11 April 2009, and my first post to this Forum was on the 9 October 2009, looking for a NOK for Kathleen Ray REID, his daughter and Kenneth Richmond REID his son in law.
In between April and today, two and a half years have elapsed, it is a search that I have come back to many times, a search that has till today always ended in failure.
However, following my last revisit on the 30th October 2011, and with the information you have provided I started again.
This morning I spoke to Wendy, Kathleen and Kenneth's daughter. It was in a way a stilted conversation, I was to put it mildly 'shell shocked'. When a search has gone on as long as this one, involved so much, it is not easy to put it into simple words when you talk to a next of kin, explaining that out of desperation you spent one Saturday walking High St, Glen Waverley looking for a house that had a sign on it saying 'ROSS'. Then to be told by Wendy that it had been demolished 10 years ago, and a block of flats erected in its place. That the Fifi you had been looking for was in fact Fyffe, her brother's middle name, and that it came from a doctor FYFFE.
So next week Glyn will post of to Wendy, John's medals, which Wendy who holds her father's medals admitted she had always wondered about her grand father's medals.
So next week a search began so long ago will conclude and Wendy the Daughter of a First World War Veteran, great niece of two other WW1 veterans, one of whom Charles Merton, Ex3178, 59th Battalion, was Killed in Action, 19 June 1916, at Fromelles, will at least have one of her questions answered.
As always my thanks to you of the Forum.
Well done Bill. The medal is rather tarnished which isn't that clear in the pictures. The rim is also badly bruised and it was hard to get a photo of the impressing.
Thank you to Rodney A from Queensland who originally sent this medal to me.
The returned medal tally is now 1014. 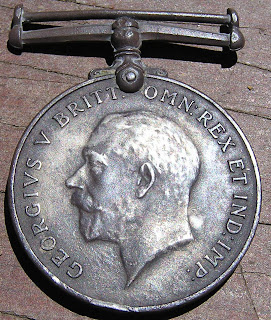 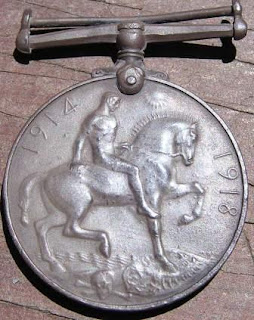 The 1914/15 Star awarded to 1397 PTE Reginald John James Holmes looks like it has travelled a very long way but really it hasn't. As can be seen in the pictures the medal is well worn, there is also a large dent on the reverse of the crown which has caused the medal to be a little bowed and it doesn't lie flat. This suggests a really hard life.
Holmes was an resident of Austinmer, the medal was dug up from a garden in Austinmer and the medal will be returned to Holmes grand son who also lives in Austinmer. So even though the medal has been out of the family care for some time it hasn't travelled that far.

During WWI Holmes served with the 7th Light Horse Regiment.
This return was possible thanks to the Daily Telegraph newspaper and the In search column.

The returned medal tally is now 1013. 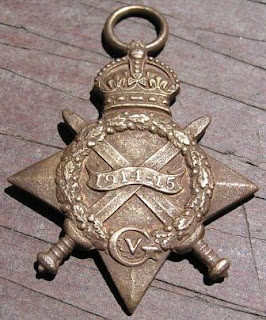 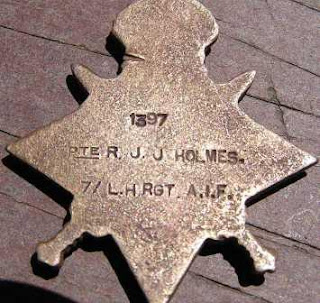 Posted by Lost Medals Australia at 14:29 No comments: