When I first received these medals I was really confused by the unit that PTE L. Loader served in. I'll explain that all shortly but almost immediately after I posed the question on the British Medal Forum I had the the unit name deciphered and also two candidates for how L. Loader was.
The first medal that confused me is the BWM with the unit name of 1-36 B.N. RY. BN. I.D.F. This turned out to be the 1-36th Bengal Nagpur Railway Battalion, Indian Defence Force. The second medal is Volunteer Long Service Medal named to B.N. RY. BN, A.F.I. The Bengal Nagpur Railway Battalion was the same information but A.F.I stands for Auxiliary Force (India), the name having changed in the 1920.
It was the Bengal link that gave me the clue I needed to join all the information I had available. One of the candidate names I received from Bart of the BMF was Leslie Mervyn Loader. I found his name in the immigration records having emigrated to Western Australia in 1950 and his place of birth was given as Bengal, India. I had found my man and using the electoral rolls and published death notices I found the names of Leslie's daughter, grand son and great grand children. It took a grand total of 30 minutes to get to that point. The next step, to get me in touch with a family member, took another 5 weeks.
The leads I had didn't result in being able to contact a family member so I revisited the family tree and found the name of Leslie's son and his wife. I simple search of the White Pages gave me the phone number I needed to contact the right person and I'll soon send the medals to Leslie's daughter in law.
Thanks goes to Steve Carter who found the medals and forward then on to me. The returned medal tally is now 2131. 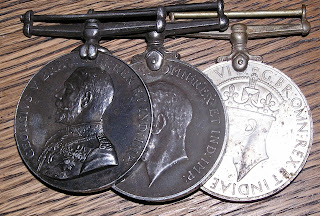 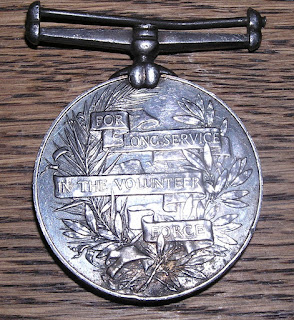 Bill and I are often asked how medals are lost in the first place. This is often a question we can't answer but I think in this case the condition of this British War Medal gives a clue. The disc of this medal has come adrift from its suspender which is probably the way it was first lost.
We are so lucky that these medals are named and this BWM was awarded to 6774 Wally Thomas Reginald Musgrave who served in the 1st Battalion AIF.
Wally didn't marry but he is remembered by his grand niece and it is through her family that I'll return the medal to.
Thanks to Ron Moore of the 2/2 Battalion Association who sent me the medal. The returned medal tally is now 2128. 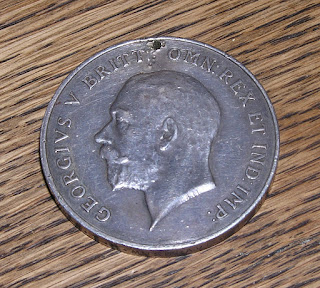 Posted by Lost Medals Australia at 18:00 No comments:

This search has one of those back stories which got more interesting the more I dug.
It began with an email from Aaron B who had the British War Medal awarded to 4564 PTE Stanley Ernest Wayth, 22 Battalion. With an uncommon name like Wayth it wasn't difficult to track down Stan's family. There were large concentration of Wayth's around Queenscliff in Victoria and I found Stan's headstone was there. However, Stan's decedents later lived in the Melbourne suburbs where I had to focus my search. 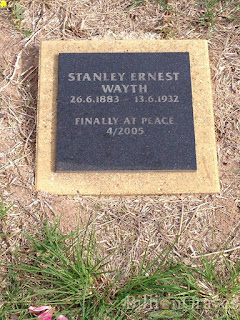 A search of Stan's name bought up numerous hits as it turns out that he played football for Geelong. He was the 99th player selected for this football club and played one game. This was a victory so he has a 100% W-D-L average. This link gives all of his statistics.
The next reference to Stan that I found was a news paper article about his death in 1932. While I couldn't quite work out why his headstone has the comment 'Finally at peace 4/2005', it is clear that Stan had an unfortunate end to his life. 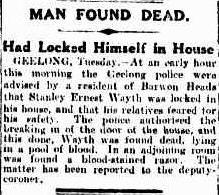 The search then got a little confusing as his son was also named Stanley Ernest Wayth. I went around in circles for a few days until I located a memorial notice (below) which refers to 'Mrs Stan Wayth'. This is Stan junior's wife Olive, nee Williamson. Based on the service details I went back to the WWI records and I worked out Olive's brother Robert (known as Roy) enlisted in 1915 aged 15 years and 6 months. A year later he was KIA at Pozieres age just 16 years and 6 months.

The notice also give me a clue as to who was Stan and Olive's son, also called Robert and also known as Roy. Roy died in 2015 and from his death notice I got his son's name, Ross, and also that of his grand daughters.
Through Face Book I sent a message to Stan senior's great great grand daughter and she put me in touch with Ross. The circumstances made it possible for me to meet Ross today and hand him his great grand father's BWM. Ross, who is a really nice gentleman, gave me one more surprise in this story, his middle name is Stanley, which carries on the family tradition.
The returned medal tally is 2127.
Posted by Lost Medals Australia at 19:20 No comments:

This Australian Defence Medal has done the rounds.
It was recovered in December 2016 by the NSW Police  Service and found its way to Senior Constable Jackie Largo. Jackie definitely goes to the next level to see recovered items returned to their owner. In this case she sent the medal to Defence and then it made its way to me via Polly from DCO. Because the medal was a recent award, I had to call on a contact, Paul, to confirm the full name of 52759 V D P Sutherland.
It turns out that the initials, V D P, stand for Vincent De Paul. From there it was pretty easy and 20 minutes after starting this search I was talking to Vincent who tells me the medal was stolen from him. It is his only entitlement having served from 1954 to 1960 as an ARA solider.
The returned medal tally is now 2126. 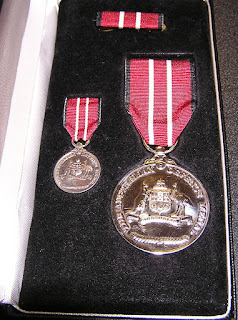 
A double success story from Bill.

As I sat down to write this story I almost felt like just saying; ‘here is a list and they are home’. But to do so would be to deny the magnificent input that we receive from the Australian Genealogical Surname Group (AGSG), who pieced together a chain what at first appeared to be random links.
The story of the return of the medals of WR/1757 Writer Mary Ursula Blyth started with a phone call from the Victorian Police. Mary’s medals had been found in a street in Broadmeadows and had been handed.
Shayne from the Victorian Police said to me when we spoke, ‘have chased everywhere, I know her name, date of birth, where she was born, but nothing else, my resources ran out. Can you help?’  And so my search began.
As I worked through the search I started to quickly get a good idea of why Shayne had run out of clues (that’s a pun Glyn).
It was here that Trove and its record of Victorian Newspapers gave me the first link to Mary, it was her Marriage to Max. Then, the same as for Shayne, all avenues dried up. It was here that I then turned to the AGSG.
In short order through the skills of Liz, Kerrie and Jenn I had, not only had the birth and name of a child, but also everywhere Mary and Max had lived from their marriage up until just before their deaths.
Then came the easy part, or so I thought. A wander down to the Electoral Office and look up the son.  No problem, right? The problem came when I could not find a phone number for Garth (the son), it turned out later that he, like so many others, have forsaken landlines for mobiles.
It then became a serendipity search through the Internet, mixing parts of Garth’s name and the address that I discovered in the Electoral Rolls. I then got lucky and could call Garth.
While in many ways this has been a pretty straightforward search that led to a successful conclusion, what I could not answer for Garth was what were his mother’s medals doing in Broadmeadows. From his knowledge, no one in the family had ever lived in that area. Another question that will probably never be answered is where they have been since 1994 when his Mary passed away. I cannot also answer the question about where his father Max’s medals are which disappeared at or about the same time. The other thing that caught my eye was the almost perfect condition of the medals.

Regular visitors to this site will be by now will be used to the opening introduction that Glyn and I have to fall back on, namely: ‘As the medals form part of an ongoing investigation we have been requested to not publish any of the details concerning the search’.
The medals of VX96446 Private Kevin Victor James Tonge, fall into this category, all I can say is that after an incredible search that started in June 2016, Kevin’s medals are home with his daughter.

The returned medal tally is now 2124. 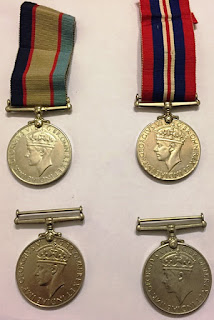 Posted by Lost Medals Australia at 20:27 No comments:

Bill and I get a lot of satisfaction helping out the different Police forces around Australia. We are often contacted about medals that have been recovered after a property search or have been handed in. The circumstances often mean we can't tell the full story but being able to assist gives us considerable gratification.
This return started with an email I received earlier this week from Senior Constable Jessica L of the NSW Police Service. She had a set of miniature medal which are hard to research as there is no identifying number or name on them. Luckily, there was one full size medal recovered which was named to NX203566 Captain James Ronald Waddell.
Post WWII, James was a doctor in NSW. He  has two sons who are also doctors. It was pretty easy to follow both of these men until 2013. Dr T now lives in the UK and all I could find was a business address. Dr S had a practice in western Sydney but the numbers listed on the Internet from 2013 are now allocated to other businesses.
For a days I was stumped and writing to the UK address seemed to be the only solution. I applied a little bit of lateral thinking and found the name of the receptionist from Dr S' practice. But the only person with the same initial/name combination in the White Pages lives on the NSW North Coast. Working on the assumption that similar punts have paid off, I provided Jessica the phone number.
To my very pleasant surprise I received an email today telling me that Jessica's message had been passed to Dr S. Jessica went on to say "Both lots of medals have been returned to a very happy Dr S. He stated his father passed away in 1975 and they haven't seen the medals for nearly 20 years".
The returned medal tally is now 2120. 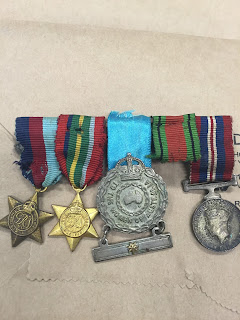 Posted by Lost Medals Australia at 17:20 No comments: