Unfortunately, I've been unable to fully post details of returns over the last couple of months. This post is of some pictures I have only just been able to take. I hope they help round out the story of these servicemen and their medals.
The post about Charles Frederick Fitzner now has photos.
This is the BWM awarded to 6787 Francisco Del Reigo as mentioned in this post.

This is the Australian Service Medal 1939-1945 awarded to Athol Stewart Carter as first mentioned in this post. This medal is from the NSW RSL box. I've mentioned before the difference in naming styles between RAN, Army an RAAF medal awarded for service in WWII and this is another example of RAN naming.

In this post I mentioned the pay book of Clifford Normanby Graham. In fact the bundle of documents I received for this soldier also included his demobilisation procedure book and his record of service. 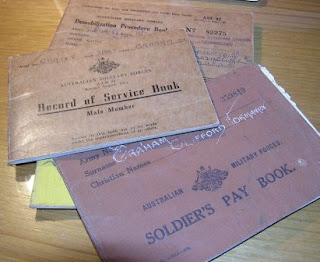 Posted by Lost Medals Australia at 15:26