This is the story of two medals that perfectly fits the lost medal criteria.
The 1914-15 Star and Victory Medal awarded to 23/552 Rifleman David Pattrick NZEF remained in the family for many years until 2007. At this time they were found by Australia Post having become separated from their packaging. My contact in Australia Post, Jackie E, forwarded the medals to me but I had limited initial success. Pam recently had a fresh look at the Pattrick family and found a critical lead that put me in contact with Parrtick's daughter who still lives in NZ. She tells me that in 2007 she posted the medal to her grandson who now lives in Brisbane but the medals never arrived. I'll shortly be sending the medal back to the Pattrick's daughter.
The returned medal tally is now 1057. 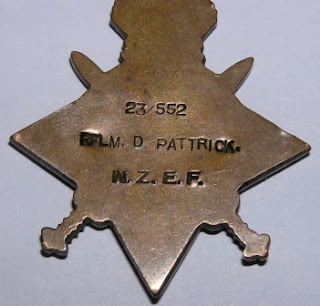 Posted by Lost Medals Australia at 08:51