When I was in The Sudan I still received many requests for assistance from people who had medals and wanted to see them returned.
This pair arrived in January and even from Africa I was able to narrow down the search for 302986 Leslie Kairau very quickly. MAJ Malcom A, a NZDF officer serving with me in UNMIS also helped out. But as is often the case, we ran in to a big brick wall.
From the blog of the Royal New Zealand Artillery Association I learnt that Les died in 2008 and the area where he had been living. Several online mentions of Les proved to be dead ends. The RNZAA kindly put a post on their blog, Muzzle Flashes. Les' grand daughter came across the post and I now have an address so that I can return these medals to Les' wife.
Thanks to Narelle M for sending the medals to me in the first place. The medal returned tally is now 1050. 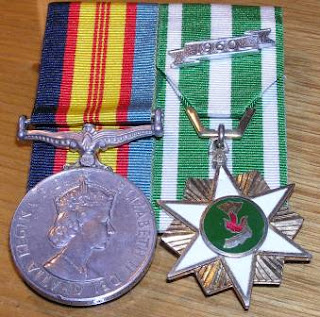 Posted by Lost Medals Australia at 16:13