I was having a look at some old posts and came across an early blog entry about low numbers on medals and unusual units. It occurred to me that over the years we have returned a medal to most ranks in the Army from Private through to Major General. We have also returned several medal groups to members of the RAN but most of these have been to the more common ranks of Ordinary Seaman or Able Seaman.
We are currently researching a single British War Medal awarded to 6252 Harold Samuel Claydon but what is unusual is that the rank on the medal is Boy-1, or in full, Boy 1st Class. This Wikipedai entry gives an explanation of the rank. Although the explanation relates to the Royal Navy rather than the Royal Australian Navy, I suspect that there would have been a lot of similarity between the two services.
These pictures show the naming in full and even the variations between hard and soft striking with some of the letters. 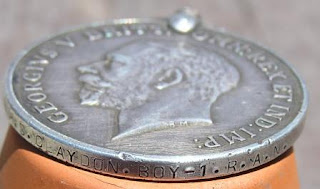 Posted by Lost Medals Australia at 18:29