34326 PTE Thomas Douglas Baillie NZEF served with the 3rd Battalion of Auckland Regiment. He died of disease on 4 Oct 17. Thomas was the son of a prominent New Zealand family and his father was a long serving member of the NZ Legislative Council. Thomas was married to Alice and they had two children. Their son Arthur died in an aircraft accident in 1924 while serving the RAF. The daughter Mabel had four children, one of who is alive and well. I'll soon be returning Thomas' Victory Medal to his nephew.
Thanks to Jackie E of Australia Post who sent me the medal and to Pam who put all the clues together and pointed me in the right direction to locate the family.
The returned medal tally is now 1055. 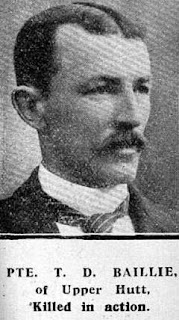 Posted by Lost Medals Australia at 08:40