Some searches seem so easy but then grind to a halt.
I received the WWII medals awarded to VX30396 Robert Stephen Swan on 18 January 2014. Within minutes I found Swan on an Ancestry tree. The tree owner's name was Deanne Joy Swan and it appeared she was Swan's daughter. Goodo, I thought, a nice easy one so I fired off a message. Six months after this I hadn't received a reply so went searching further. Swan was on several other trees but they all pointed at his daughter being named Deanne and this was confirmed by a distant relative I did manage to contact. The link I couldn't work out was what Deanne's married name was so the research got parked.
To my surprise, a bit over three years after my initial message, I got a reply from Deanne yesterday. I'll send her father's medals back to her in the near future.
Thank you to Roz who sent me the medals in the first place.
The returned medal tally is now 2026. 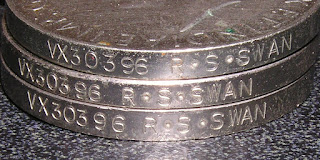 Posted by Lost Medals Australia at 11:40