The source of this medal was another odd one but in recent times it seems to be a more frequent occurrence. This story started for me yesterday when an email was forwarded to me by Peter of 75 Squadron RAAF association. The original email was from Chantelle S who had a medal that her father found while prospecting. This is the third time in recent months where a medal or dog tag was found under similar circumstances.
This particular medal is the 1939-45 Star awarded to 420116 Flying Officer Richard William Raven Bath, 75 Squadron.  Richard was killed in 1944 when his Kittyhawk airplane collided with another one.
This table is a history of the aircraft.

Richard was subsequently buried at the Ambon War Cemetery.
After I received Chantelle's request for help, it didn't take long to narrow down Richard's family. Richard's father was a solicitor and it appears that he moved around NSW quite a bit.The family eventually settled on the Central Coast but they lived at several addresses around Newcastle. The best lead I had was a Ronald Bath who was at the same address and his mother in 1954. What I couldn't work out was the relationship between Richard and Ronald. Following a hunch I looked in the White Pages and there was an entry for Ronald in a near by suburb. I rang the number only to find that Ronald died 5 years ago but he was Richard's brother.
The picture below includes Richard's mug shots from his service record.
The returned medal tally is now 2023. 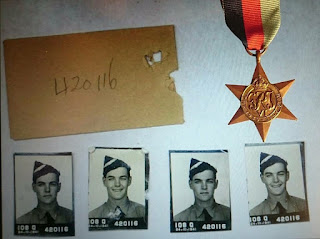 Posted by Lost Medals Australia at 20:03