By now most readers will be familiar to the quiet ribbing between Glyn and I as to who can find the custodian for a medal the quickest.
The story of the return of the War Medal 1939-1945 of VF510710 Private Lillian Veronica Newman and one of the I.D. tags of her husband, VX34998 Lance Corporal Maxwell Anthony Warren, represents the other side of the coin.
It is well over 2 years since I became acquainted with Michelle Lynch and her quest to return the medal, the I.D. tag and of all things a ‘lucky Chinese dollar’.
Fortunately, Max and his two brothers Murdoch and Donald, had all been born before 1920, so I was quickly able to the put the first two lines of the family together, almost a necessity in finding families. However, that is where it stopped being easy. Donald, or should I say Donald Edgar Morel Warren had for nearly all of his life gone by the last of his Christian names ,‘Morel’. While Murdoch chose to go by the name of ‘Noel’. In June 2015 the team from Yuki became involved, slowly adding more and more to the Warren family tree. However, there was more than one point in the search when I had to stop and for a few minutes remember which of the three brothers I was dealing with at the time. Sadly Maxwell died in 1954, nine years after the end of the war. This was at a time when few death notices were put in newspapers, particularly by a young widow with two children to support.
But through Trove I did find Max’s father’s death notice, which Yuki corroborated and its reference to the three sons, ‘Max, Noel and Morel’.
In June 2015 the search effectively stopped for the first time. While the team at Yuki had given me an incredible amount of data on the Warren family, I was unable to put it together. All I could consider was that the three sons had probably lived until 1980 or thereabouts.
Now Trove is, in effect, a living data base constantly being updated, by volunteers, correcting scanning errors. It was on my third revisit quietly checking the information that Yuki had provided, trying to fit it into what I thought I knew, that I picked up a funeral notice for Max, inserted by his Lodge. This showed his funeral at Fawkner Cemetery, a point that had been previously picked up by Mo of Yuki, and which I had bypassed missing it completely in my first and subsequent readings of the Yuki forum. At this point after having kicked myself, I again checked Fawkner, where I had previously missed Max now what I now found was also Lilian’s grave. Both she and Max were now buried together at Altona. But again I found myself running in circles, Lillian had died in 1990, and even though I checked with the undertakers there was no information available about Lilian’s family. So now I again turned to Yuki.
By the grace of good living, you should try it sometime Glyn, a check of the electoral rolls by the Yuki team found a Tonia Elizabeth Warren living with Lillian Veronica Warren. By the time I had added all this information to the Warren family tree, the team again came back this time with an address for Tonia.
On 8 March 2017, Michelle having flown with her husband Greg from Queensland, passed to Tonia her mother’s missing 1939-1945 War Medal and one of Max’s I.D tag, and of course the lucky dollar which are pictured below.
The returned medal tally is now 2039.

The medal before cleaning 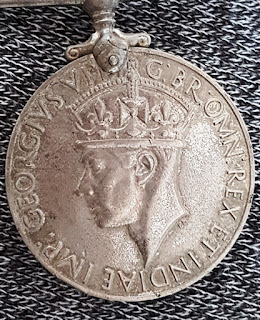 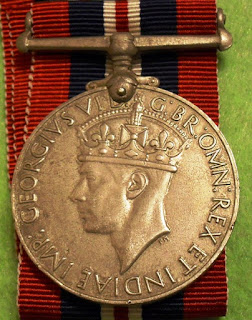 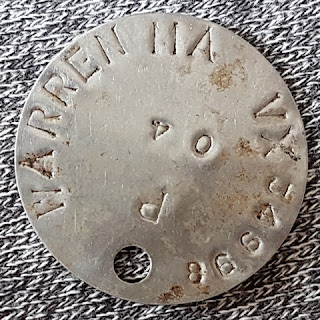 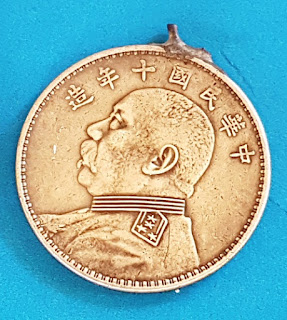 Posted by Lost Medals Australia at 20:39