After weeks of no activity we have had some pleasing success this week. Here is another story from Bill.

I received the WW1 Victory Medal of 1234 Private Arthur Rourke from David in July 2015. It is a search that I have come back to twice before, each time looking for that one piece of evidence that would take me the next step. But always to no avail.
Finally, it was the team at Australian Surnames Genealogy that provided the break through, when, for the third time, I opened the search. A break through that took me to Albert’s great niece Monica, who, as it transpired, is the family historian. She is also the keeper of the medals of 978 Gunner Harry Wilson, another family member.
This is my message to Monicia:
‘You know it has certain obligations that go with it. You or you descendants will wear it on Anzac Day, and if they will let you, and even if they won’t then push your way into the local Anzac Day parade, you may have to march at the back with descendants, but you will be in front of the Scouts.
But above all please have a plan in place that the medal will always have a home. That there is an order of precedence following you.’

Arthur, was like so many young men who answered the call during WW1; young men who went, served and returned. But in Arthur’s case, as a result of a gunshot wound to his right leg and constant attacks of bronchitis, he was discharged as medically unfit for further service in April 1918. As a consequence of his service he suffered recurring health problems, which, in turn, led to his early demise.
In researching the family I came across his obituary in the Catholic Press , dated  15 July 1926.
‘Mr Arthur Rourke.
The death occurred on the 8th inst. of Mr. Arthur Rourke, of Knight-street, Arncliffe. The deceased, who was the youngest son of Mrs. and the late Thos. Rourke, of Inverell, was a single man, and 38 years of age. He was a member of the 33rd Battalion, A.I.F. Since the war he had not been in good health, but no serious consequences were anticipated. His kind and genial disposition gained for him hosts of friends and he bore his suffering with exemplary fortitude. He received all the consolations of his holy Church from the Rev. Father Lynch. The funeral took place at Rookwood Cemetery, where Rev. Father Carmody officiated. The late Mr. Rourke is survived by an aged mother, who had received widespread sympathy in her bereavement, and three brothers — John (West Maitland), Alfred (Brisbane), Walter (Rind wick), and three sisters — Mrs. S. Nichols (Denton Vale), Mrs. J. Lyons (Sydney) and Mrs. C. Wilson (Melbourne).— R.I.P.’

The returned medal tally is now 2047. 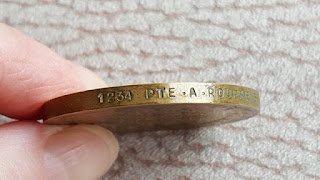 Posted by Lost Medals Australia at 20:09